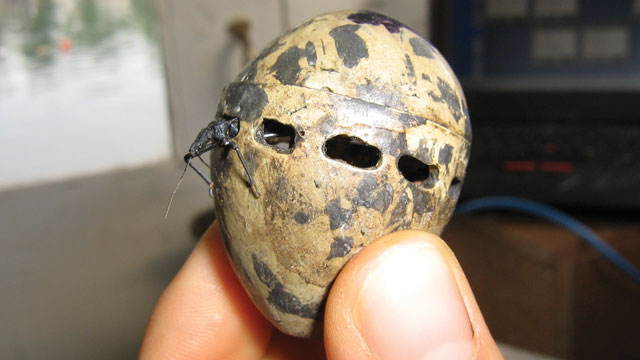 BUGGING THE NEST: A bloodsucking bug pokes its head out of a perforated dummy egg—a setup that ecologist Peter Becker uses to collect blood from nesting birds. COURTESY OF CHRISTINA BAUCHPeter Becker, who studies the ecology of seabirds in northwest Germany, traps birds to measure, tag, and sample them. Like generations of naturalists and ornithologists before him, Becker, whose home base is the Institute of Avian Research in Wilhelmshaven, Germany, works with animals that can weigh just ounces and have delicate bones that can break under very slight pressure. So the less he disturbs them, the better for their health and that of his data. Sensitive to this problem, Becker found inspiration in a 2004 seminar on bats and bloodsucking insects by wildlife biologist Christian Voigt of the Leibniz Institute for Zoo and Wildlife Research.

Biologists, both in the field and in the lab, often draw blood samples...

In order to collect blood, researchers typically capture, restrain, and anesthetize the animals, especially wild ones. But the stress of this manipulation can dramatically alter the characteristics of blood and its components. “Stress-sensitive parameters like the hormone corticosterone rise quickly” in stressed birds, says Christina Bauch, an ornithologist and Becker’s former PhD student. “If one is not able to bleed them within three minutes, one cannot measure baseline levels [of hormones].”

Researchers have used triatomine bugs to collect blood from more than 40 species of birds and mammals.

These problems are even more pronounced in bats, which tend to be more delicate and more susceptible to physiological stress than birds. When conventional capture and syringe strategies failed, bat researchers like Voigt turned to living syringes: bloodsucking assassin or “kissing” bugs of the subfamily Triatominae. In 1986, researchers demonstrated that these bugs could suck blood from bat wings without disturbing the animals. The blood could then be collected from the distended abdomens of the bugs and analyzed in the lab.

Because many birds spend vast amounts of time incubating eggs, Becker wondered if smuggling bugs into nests by hiding them in hollow, perforated eggs might be a good way to obtain blood samples. “I thought if that works, it is a great idea,” recalls Becker. “It will definitely disturb breeding birds less than if one needs to catch them.”

First he had to settle on an effective design for the eggs, making them heavy enough to avoid arousing the suspicions of mother birds. Becker and his colleague, Rolf Nagel, made the eggs out of epoxy casting resin, adding weight by mixing bits of lead into the shells.

Becker’s initial dummy egg had one netted window through which the bugs could feed. Birds tend to roll their eggs in the nest, however, so this window would sometimes face away from the bird. So he abandoned the netting and simply added many little holes around the eggs’ circumference.

Becker and Bauch tested the dummy eggs on common terns (Sterna hirundo), using Dipetalogaster maximus, an assassin bug species that is native to Baja California Sur, Mexico. “Even our first approaches were successful,” says Becker: one-third of his initial trials collected enough tern blood for analysis. And his lab has continued to improve the egg design, upping that success rate to 80 percent.

Although the bugs are proving helpful in collecting bird blood, collaborating with them takes some getting used to. “It was a little scary to see about a hundred bugs running [around] in a little glass jar,” says Bauch, who has also used the bugs to study common swifts (Apus apus). Fortunately, “extracting blood from the bugs is easy.” The swollen abdomen of a blood-fed bug is punctured with a syringe and the blood is drawn out “carefully and slowly.” 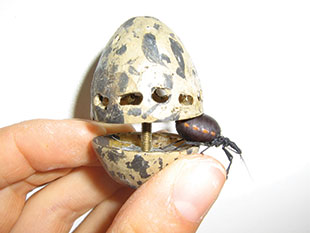 COURTESY OF CHRISTINA BAUCHCollecting blood with bugs raises concern that bugs might alter the profile of the target species’ blood. But ingested blood in the bug remains undigested if it is extracted from the bug’s crop within several hours of the insect biting a bird, before dilution and small-nutrient absorption of the blood begin, explains insect physiologist Fernando Genta of Instituto Oswaldo Cruz, Brazil. It takes days or weeks for ingested blood to move into the midgut to be fully digested. Comparisons of rabbit blood collected with syringes and with bugs have revealed no differences in hormones (Gen Comp Endocr, 135:100-107, 2004), antibody titers (J Wild Dis, 42:466-69, 2006), or blood chemistry.

Genta adds that possible contamination of the ingested blood with insect or microorganism sources “can be easily discriminated” by using “specific probes for the genetic material of the blood host.” Bauch and her colleagues have conducted telomere studies, for example, which require high-quality DNA samples, using bird blood collected by triatomine bugs (P R Soc B, 280:20122540, 2012).

In total, researchers have used triatomine bugs to collect blood from more than 40 species of birds and mammals. But because triatomine bugs are vectors for the parasite that causes Chagas disease, a potentially chronic infection that can cause heart failure, the insects are used as syringes mostly with captive animals in temperate regions. Triatomine bugs have never been used in the field in tropical regions outside of Latin America, to avoid the bugs establishing themselves in new ecosystems.

“I would not want to introduce triatomine bugs to Africa,” says Wolfgang Goymann of the Max Planck Institute for Ornithology in Starnberg, Germany, who studies birds in Tanzania and has used triatomine bugs on captive birds. “If they get loose, [who] knows what could happen. They could become new vectors for diseases affecting wild animals and humans.”

Günter Schaub of Ruhr-Universität Bochum, Germany, who has supplied triatomine bugs to labs in Europe, agrees. He suggests that scientists focus on searching “for a factor that kills the bugs during [their] next molt,” which would prevent the insects from spreading in tropical regions.

Becker is happy to continue using dummy eggs in his long-term bird studies, though he concedes that the method has caused some unforeseen distractions. “Sometimes at conferences there are more questions on the bug method and how great it is” than on the study itself, he says.