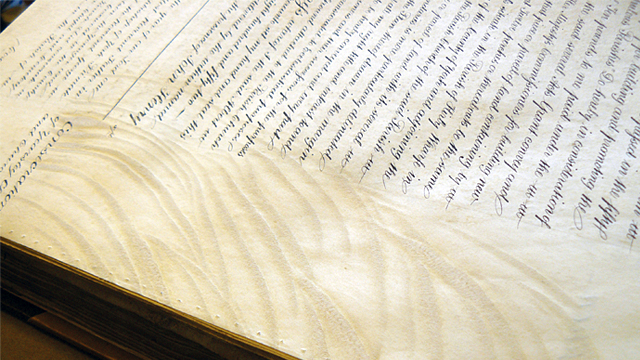 SKIN IN THE GAME: Parchment manufacture marks in a church register from 1853–1858 (left), and a sewn repair in an even older manuscript from 1306–1311 (below)BY PERMISSION OF THE BORTHWICK INSTITUTE FOR ARCHIVES

The Borthwick Institute for Archives, housed at the University of York in the U.K., boasts thousands of church documents, some of which date back to before 1300, as well as troves of medical illustrations, architectural drawings, and records of the British-Caribbean slave trade. But recently, a team of biologists began digging into the Borthwick’s records in search of a different sort of information: genetic material that is yielding insights into the selective breeding of farm animals.

Rather than rely solely on scarce, weather-beaten bones to reconstruct the animals’ genetic histories, the researchers decided to extract DNA from pieces of 17th- and 18th-century parchment. Produced from the skins of sheep, goats, and cattle, parchment was commonly...

Beginning with the Dead Sea Scrolls in 1996, a handful of researchers have used polymerase chain reaction (PCR) to amplify bits of high-copy mitochondrial DNA from parchment, but these investigations have yielded little information beyond species identification. PCR favors longer stretches of DNA, which often come from contaminants, and can also produce chimeric sequences when, for example, a sheep DNA fragment is incompletely amplified, and a bit of goat DNA attaches to the amplicon in its place.

Matthew Teasdale and Daniel Bradley of Trinity College Dublin and their colleagues were the first to apply next-generation sequencing to DNA from parchment (Phil Trans R Soc B, 370:20130379, 2014).

“The key parameter with historical DNA is simply how much of your target species DNA is there,” says Bradley. “And parchments have a very high percentage of endogenous DNA compared to contemporaneous bone samples.” Parchment documents also offer the advantage of more precise dating.

To test the feasibility of high-throughput sequencing for analyzing animal genomes from parchments, Teasdale and Bradley teamed up with bioarchaeologists at the University of York and Borthwick archivist Christopher Webb.

“At the beginning of the process, we didn’t know how much parchment would be needed in order to get a decent DNA record,” says Webb. He advised the researchers to start with “conservation fragments—in other words, bits of parchment that we’ve taken off records that are of no significance in themselves,” he explains. “They were only taken off because the records were themselves damaged and needed to be conserved and repaired.”

The team took 25 mm2 pieces from a pair of damaged parchments in the Borthwick archives: a 17th-century title deed and the cover of an 18th-century parish register book. Prior work on English parchments suggested these were made of sheepskin, which the team confirmed using mass spectrometry analysis of the protein collagen—parchment’s main component. The manuscript dates spanned a period of major sheep-breeding advances in England, when selective mating efforts greatly enhanced the quality of wool.

Both parchments yielded complete mitochondrial genomes, as well as nearly 10 percent of the sheep nuclear genome—an improvement over the 0.1 to 5 percent coverage obtained from bone samples. Contamination rates from both modern and historical human DNA were around 5 percent.

“Next-generation sequencing is such a good technique” for ancient DNA studies, says Bradley. Because “you’re analyzing everything,” he says, contamination “just seems to melt away . . . we can analyze our way through it.”
The researchers compared single-nucleotide polymorphisms (SNPs) from the parchment DNA to those found in modern sheep breeds. The SNPs from the 17th-century parchment matched the genotypes of heritage black-faced sheep from northern Britain, while the 18th-century sample was similar to sheep varieties from southern regions, which were hotbeds of sheep-breeding innovation.

Encouraged by this glimpse into sheep history gleaned from just two parchments, Bradley and his colleagues are now analyzing more Borthwick documents to get a fuller picture of the genomic changes that occurred during selective breeding. They also expect Irish archives to tell the history of cattle changes, and goat-based parchments to reveal breeding trends in southern Europe.

“The genome change in sheep is a big deal in this period,” says Bradley. “A lot of England’s wealth is built around the wool trade, and in terms of breeding, this is where it’s happening. So [this work] opens up a tantalizing window as to what a more concentrated analysis might reveal.”

The group’s preliminary findings differ from the last published analysis of parchment DNA. In a PCR-based study, Michael Campana and his colleagues at the University of Cambridge amplified nuclear and mitochondrial DNA fragments of multiple species from each of a dozen 18th- and 19-century English parchments (J Archaeol Sci, 37:1317-25, 2010).

“It looked like you were PCRing this horrible soup rather than getting good data from one individual,” says Bradley. The intermingled sequences suggested complex parchment manufacturing processes, making DNA analysis potentially useful for understanding parchment sources, but not necessarily for tracking the history of animal husbandry.

Campana thinks the next-generation sequencing approach is promising, but cautions that many parchments may contain mixtures of species. “Parchment manufacture is complicated and extremely variable,” says Campana, who is now investigating the history of infectious diseases at the Smithsonian Institution in Washington, D.C. “There’s no reason to believe that one set of parchments represents all sets of parchments.”

Besides reconstructing animal breeding histories, Webb hopes DNA analyses will help to answer another set of questions. Historians still know very little about the intricacies of parchment manufacturing and how raw-material sourcing differed by region and time period, he says. “One of the most interesting questions for me, as an archivist looking at the archives of long-lived institutions, is: Where did they get their parchment from?”

“We have absolutely no idea,” says Webb, whether the Diocese of York sourced its parchments locally, from London, or from all over England. “Depending on what the answer is, that tells us a lot about medieval economy and trade.”