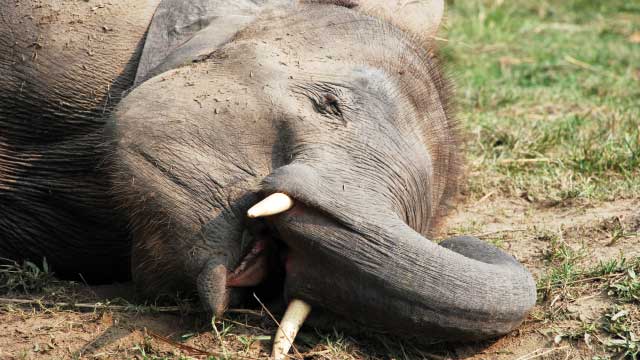 Humans typically sleep between six and eight hours per night. Some bats doze for a whopping 15 or 20 hours. Large animals, such as giraffes and elephants, snooze less than four hours a day. What explains such diversity in sleep times across mammals? Although a concrete answer is still lacking, ideas abound about how and why sleep patterns evolved.

One popular hypothesis is that, because larger animals have to eat so much to maintain their big bodies, they don’t have time to sleep a lot. “An elephant has to spend between 17 and 19 hours per day eating,” says Suzana Herculano-Houzel of Brazil’s Institute of Biomedical Sciences at the Federal University of Rio de Janeiro.  “Because there’s only 24 hours in a day, elephants and [other] very large animals sleep...

Another hypothesis links sleep duration  with metabolic rate. In October 2013, Maiken Nedergaard of the University of Rochester Medical Center and her colleagues published evidence that sleep helps clear away metabolites generated in the brain during waking (Science, 342:373-77). After reading the study, Herculano-Houzel suspected that the greater density of neurons in the brains of small animals leads to a faster buildup of metabolites, causing the animals to fall asleep. “There are these hilarious stories [of] pygmy shrews: they start eating a cricket, [and] they fall asleep mid-lunch,” she says. “I can’t help but think that’s really the price you pay for having such a dense concentration of neurons.”

What explains the diversity in sleep times across mammals?

As brains evolved to be bigger, they became less dense, so “those sleep-inducing metabolites are going to take a little bit longer to accumulate,” Herculano-Houzel reasons. Sure enough, she found a nice correlation between daily sleep duration and the ratio of cortical neuronal density to surface area across mammals (Proc Biol Sci, 282:20151853, 2015). “That actually tells a pretty compelling story,” she says.

But when discussing variation in sleep habits across the animal kingdom, total time snoozing isn’t the only important variable, notes Isabella Capellini of the University of Hull in the U.K. Another key difference in how animals sleep is whether they do it all at once, as humans usually do, or whether they nap on and off throughout the day. In 2008, Capellini and her colleagues showed that small mammals tended to sleep for less time in a given bout, but for more time overall, than large mammals (Functional Ecology, 22:847-53). This variation may also stem from differences in the animals’ energy needs, the team suggested: because small animals have high metabolic rates, they may need to eat more frequently (even if the total amount of food a shrew consumes is far less than that ingested by an elephant), while large animals such as elephants, with slower metabolisms, can enjoy longer sleep bouts.

“We proposed that one advantage of becoming bigger over evolutionary time might be that you can also consolidate your sleep,” says Capellini. “And the moment you consolidate your sleep, you can start getting rid of those transitional stages that bring your brain from active to sleep,” which take time that is dedicated neither to the restorative stages of sleep nor to the productive stages of waking.

Ecological variables also play a role, Capellini notes. Predation risk, for example, may put pressure on prey animals to be awake and vigilant more often than beasts at the top of the food chain. Another possibility is that the presence of parasites may influence mammalian sleep patterns. Capellini and her colleagues found no link between predation risk and either total sleep time or daily sleep patterns in mammals, but they did find that higher risk of infection is associated with longer bouts of sleep, which boost immune function (BMC Evol Biol, 9:7, 2009). Animals in environments where parasites are common may have evolved longer sleep times to protect themselves, Capellini says. “We proposed the idea that sleep essentially allows the body to divert energy to expensive physiological processes like maintaining the immune system.”

Another open question about the evolution of sleep patterns is how humans, with our unusually large brains, differ from other primates, and why. Duke University’s Charles Nunn, who collaborated on Capellini’s studies, and his postdoc David Samson recently culled data on sleep times among primates from an ecological informatics database and saw a surprising trend. “We looked at the data and realized, wow, humans are the shortest-sleeping primate,” Nunn says. Accounting for variables such as body mass, metabolic rate, and brain size, the researchers built a model to predict what human sleep duration would be if the species were a typical primate—and got an answer of more than 10 hours per day, confirming the initial impression that humans are exceptionally short sleepers (Evol Anthropol, 24:225-37, 2015).

Nunn and Samson hypothesize that humans evolved shorter sleep times in conjunction with the transition from an arboreal lifestyle to life on the ground—where our ancestors needed to be more vigilant for predators and hostile conspecifics, and when “fire and other things enabled us to stay up late, past dark, and be effective,” Nunn says. Less sleep would also have given early hominins more time to establish beneficial social relationships and to learn new skills and knowledge, though they would still have needed sleep to help them maintain that information. Supporting this hypothesis, Nunn and Samson also found that humans spend an unusually long time in rapid eye movement (REM) sleep, which is believed to reinforce learning and memories. “If our sleep is really shortened partially because of the benefits of social learning, you would expect humans to have a higher proportion of REM sleep, which is what we find,” Nunn says. Essentially, humans sleep more “efficiently” than other primates, he and Samson suggest.

Herculano-Houzel thinks that mastering fire may have also helped human ancestors meet the increased energy demands of their bigger brains. “Cooking is actually a way of predigesting your food before you put it in your mouth,” she says. “The fire breaks it apart, breaks molecules down, makes meat tender.” Herculano-Houzel has calculated that, to accommodate a body of 70 kg and a brain of 86 billion neurons, a typical primate would have to spend 9.5 hours eating raw foods, and one study estimated that cooking reduced total time spent chewing from 4–7 hours a day to only an hour (Evol Anthropol, 19:187-99, 2010).