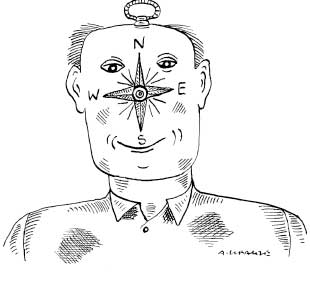 ANDRZEJ KRAUZEThinner than plastic wrap and lighter than a feather, electronic skin, also known as smart skin or imperceptible electronics, detects information about the internal and external environments. Such technology has been in development for wearable medical instruments, health monitors, prosthetics with sensory feedback, and even robotic skin. Now, scientists are expanding electronic skin into the realm of the once-impossible: endowing humans with a sixth sense.

“There have been many kinds of physiological and/or electrophysiological sensors for wearable electronics,” Dae-Hyeong Kim of Seoul National University told The Scientist in an email. In 2014, for example, Kim and his colleagues developed a smart prosthetic skin that could sense pressure, temperature, and humidity and was equipped with stretchable electrode arrays for nerve stimulation (Nat Commun, 5:5747). But while sensors exist that can duplicate or enhance human senses, no one has yet developed a smart skin to detect a...

“It would truly be a sixth-sense technology,” says Makarov. “Artificial magnetoreception is something that extends the five natural senses of humans to something that is unavailable.”

To create a smart skin with magnetic field–sensing capabilities, Makarov, then at the Leibniz Institute for Solid State and Materials Research Dresden, and his colleagues added magnetic field–sensitive sensors to 1-μm–thick polymeric foils. They then laminated the ultrathin foils to an elastic material to create a stretchable, flexible, skin-like device that could detect magnetic fields of 1 millitesla or less—several orders of magnitude weaker than a typical refrigerator magnet (Nat Commun, 6:6080, 2015). For the purposes of this proof-of-concept experiment, the strength of the magnetic field detected was displayed on a series of LED lights. “The signal-to-noise is very good—it’s a high-performance magnetic field sensor,” Makarov says. “You can put it on a joint, on the knee or the finger, and it will not change performance as you are bending your knee.”

“The sensitivity of the magnetic sensor is very good, and its ultrathin nature provides extreme deformability,” says Kim. “The potential applications are quite wide.”

But there’s a long way to go, Makarov notes. “This is very much a starting point.” One important step will be to upgrade the readout method. While LED lights are relatively easy to work with, there are more-elegant options, Makarov says. The signal could be transmitted wirelessly to a smartphone, for example, which could be set up to vibrate in response to certain levels of magnetic fields.

Another improvement Makarov would like to make is to integrate the magnetoreceptive technology with other smart-skin sensors, such as those for touch and temperature. Makarov’s team is currently working to do just that, and he is expanding his lab to support the effort. “You will have touch sensors, temperature sensors, magnetic-field sensors combined on a single foil,” he says.

Such multifunctionality will be key to making smart prosthetics, but Haixia “Alice” Zhang, a microelectronics professor at Peking University, suspects that magnetoreceptive features may be more readily adopted for robotics applications. “Magnetoreception is very important for smart sensing,” Zhang, told The Scientist in an email. In March, she described a smart-skin device with sensitive touch detection (ACS Nano, 10:4083-91).

Makarov is hopeful magnetoreceptive skin could be used to create an artificial proprioceptive sense. With a magnet placed in your belt, for example, magnetic-field sensors in the smart skin on your hand could provide you with feedback about your hand’s location in space. “It provides the possibility to monitor displacements of your body parts,” he says. “In principle, you can rebuild the proprioceptive system with magnetic-field sensors.”

Makarov also muses about the possibility of such magnetoreceptive capabilities being used as wearable navigational devices. But that would require a more powerful sensor; to realize artificial magnetoception, the technology must be sensitive enough to detect the Earth’s magnetic field, as many birds and other species can (see “Senses Census” here). With the current sensor, “we are speaking about fractions of millitesla, compared to the magnetic field of the earth which is tens of microtesla,” Makarov says. “There is still maybe two orders of magnitude in field to go down.”