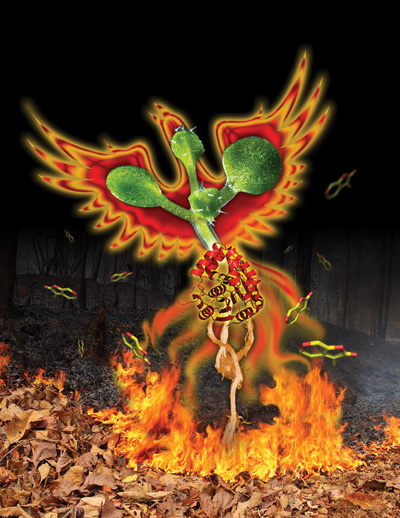 PHOENIX MOLECULE: Wildfire ash and smoke generate karrikins, which are sensed by a seed protein, KAI2, stimulating the growth of a new plant in the nutrient-rich ashes of its parents.JAMIE SIMON/THE SALK INSTITUTE FOR BIOLOGICAL STUDIESFires leave behind charred and blackened landscapes. But eventually life returns, sometimes more vibrantly than ever, as some plants thrive, taking advantage of a sun-flooded and largely competition-free environment.

In 1990, South African researcher Hannes de Lange showed that it might be more than increased access to sunlight, nutrients, and space that spurs the proliferation of certain plant species following fire. The secret to the success of these plants could lie in smoke. De Lange found that smoke could stimulate seeds of a fire-sensitive South African shrub to germinate. Nearly a decade ago, University of Western Australia researcher Gavin Flematti and colleagues were the first to identify a potent class of smoke...

“The big mystery remained, how are [kar­rikins] recognized by plants?” says David Nelson, a geneticist at the University of Georgia who frequently collaborates with Flematti. This spring, following a flurry of publications on the crystal structure of an ancient enzyme-turned-receptor called KAI2 and amid speculation about its biological function,  researchers jointly affiliated with the Salk Institute for Biological Studies in California and Howard Hughes Medical Institute (HHMI) published evidence that KAI2 binds karrikins (PNAS, 110:8284-89, 2013).

“Genetics studies have been able to work out that KAI2 could be a receptor or an enzyme, but up until this recent paper we haven’t been able to demonstrate there was any direct binding,” says Flematti.

“This paper takes a natural phenomenon that we can observe at a very large level down to the molecular level,” adds Joseph Noel, a structural biochemist at the Salk Institute and HHMI and an author of the PNAS paper.

The confirmation that karrikins bind to KAI2 supports recent speculation about the evolutionary history of both molecules. KAI2 is an α/β-hydrolase, which likely once acted as a catalyst for chemical reactions but now appears to have evolved to be a receptor as well. Karrikins share structural similarities with a family of molecules called strigolactones, hormones that plants use to control shoot and root architecture and attract mycorrhizal symbionts.

KAI2 appears to be related to a family of strigolactone receptors found in Arabidopsis called D14 receptors, and KAI2 is itself sensitive to strigolactones. In addition, Nelson showed in 2011 that to induce changes in plant growth and germination, both strigolactones and karrikins depend on MAX2—a member of a class of molecules that label binding targets for destruction (PNAS, 108:8897-902, 2011).

But how exactly plants evolved to respond to fire is still an open question. Noel says he suspects that the smoke sensitivity evolved when plants adapted an already-existing signaling system to respond to karrikins in smoke, in order to take advantage of the nutrient-rich soil and sunny climes left over after fires. One possibility is that plants simply coopted an ancestral strigolactone-sensing system. Another possibility, first suggested by Flematti, Nelson, and colleagues, is that KAI2 is the receptor for a yet-undiscovered endogenous karrikin-like molecule that could have preceded plants’ response to fire.

Experiments demonstrate that plants that are mutants for KAI2 or its signaling partner MAX2 show abnormal growth patterns that cannot be explained by impeded karrikin and strigolactone signaling, implicating an unknown karrikin-like molecule that has nothing to do with smoke.

Moreover, researchers have identified karrikin sensitivity in many diverse angiosperms, including plant species that aren’t typically exposed to fires in their natural environment, like the genetic workhorse Arabidopsis thaliana, which the Salk researchers used in their study of KAI2’s role in binding karrikins. An endogenous karrikin-like molecule could help explain karrikin responsiveness in plants that otherwise would seldom come into contact with the compounds.

Flematti says he and colleagues are searching for such an endogenous molecule, as is the Salk team. “Of course it’s all still speculation, and the prize will go to [whomever] can demonstrate the signal exists (or doesn’t!),” Nelson writes in an e-mail to The Scientist.

The information uncovered by the Salk team, including the karrikins’ binding location on KAI2 and the receptor’s conformational shifts after that binding, should provide clues to how KAI2 interacts with signaling partners and downstream targets. “It really opens a door to looking deeper into what else is involved in this signal in terms of germination of dormant seeds,” Flematti says.

“The coolest thing still remains that you have a system that can respond to these abiotic smoke signals,” says Nelson.