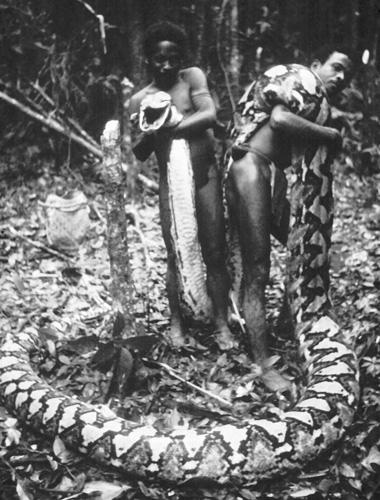 As 6-month-old baby Nini slept quietly in the same hut as her older sister and brother, she was unaware that she would become an only child that night. By the time her father, Teteng, entered the hut around sunset, one of the children was wrapped in the coils of a giant python and was being swallowed headfirst. Teteng slashed and killed the snake with his hunting bolo knife, but it was too late. Nini’s siblings were dead. Only baby Nini survived.

It is the stuff of nightmares and horror movies, but for the Agta tribal people on the Philippine island of Luzon, python attacks are harsh realities. Anthropologist Tom Headland of the Summer Institute of Linguistics International in Dallas, Texas, documented the story of Nini and...

Although constrictors are known to prey on a variety of primate species, whether or not such snakes would have posed a significant threat to early humans has been a hotly contested issue, says Rick Shine, a snake expert at the University of Sydney in Australia. “It is one of these classic examples of a topic that people are interested in, and they speculate about and have quite diverged opinions on, but nobody had the information,” Shine says.

Headland’s data revealed that pythons regularly attacked Agta males as they hunted and foraged in the jungle, suggesting our forbearers likely faced the same risk. To have such insight into prehistoric predation is quite possibly unique, says Shine. Because of widespread deforestation and modernizing of tribes, he says, “it is probably too late in most of the world to get such information. . . .I was surprised that the data existed.”

Greene was pretty surprised, too. In 2000, he was shown a photo, taken by Headland in 1970, of two Agta men holding a slain python measuring nearly 23 feet in length. “My jaw just fell open,” he says.

Greene wanted the photo for a natural history book he was writing and managed to track down Headland. “I wrote to him and said, ‘Can I please use your picture in a book I’m writing?’” says Greene, “He said, ‘Oh yeah, great, and by the way, do you think you would be interested in these data I’ve got from back in the ’70s on the incidence of python predation and attempted predation on the Agta?’”

“Once again my jaw just dropped,” says Greene. “Actually having data on wild animal predation of humans, let alone humans living a relatively primitive lifestyle, is just amazing.” Greene promptly flew down to Dallas and spent a full day poring over Headland’s old notes, which had been carefully filed away for 30 years.

Headland and his wife, Janet, had conducted a census of the Agta living in the Casiguran region on the east-central side of Luzon. Among the questions they asked each tribe member was whether their parents were still alive and if not, how they had died. One day, they received a startling answer. “Somebody said, ‘He was killed by a python,’” recalls Headland.

The pair confirmed that a total of six Agta tribespeople had been killed by pythons between 1934 and 1973. However, a far greater number—15 of 58 Agta men questioned (26 percent)—had survived attacks. “At the time I thought, ‘Well, that is really, really interesting,’” says Headland, “but I buried it away in my files and never did anything with it.”

But Greene realized the significance of the data. “When you consider that [Tom] had asked each of these [Agta] men, ‘How did you escape being predated?’ and they always said, ‘I killed the python with my knife or my shotgun,’ that has to mean that before the availability of metal weaponry, their likelihood of getting killed was higher,” says Greene. “Imagine what a profound thing pythons would be in your life if you lived in that forest and had to go out every day foraging.”

Headland’s Agta data contravened a long-held notion that large snakes only eat humans under exceptional circumstances, says Greene. To put it in perspective, he adds, “What if one in four of us had suffered a shark attack?”

Thanks to their weapons, the Agta more often kill pythons than are killed by them. “Occasionally when we ate with them, [python] would be the main dish,” Headland recalls. For our early hominid ancestors, however, the outcomes of python encounters might have been less favorable. Indeed, there is plenty of evidence that our extant primate cousins are often python prey.

Besides being predator and prey of giant snakes, hominids would have also competed with snakes for food, say Headland and Greene in their recent article presenting the Agta data (PNAS, 108:E1470-74, Epub 2011). The Agta mainly hunt deer and wild pigs, occasionally monkeys, and all of these are common prey for pythons.

Given that a large python can eat a deer, says Greene, an adult Agta male—small by Western standards—would be a good meal, but certainly not enormous. “In fact, I think that python in [the photo] could have eaten both those guys if she had gotten the drop on them,” he says. “Just look at the size of her head and the size of their heads. She wouldn’t have had any trouble at all swallowing them.”