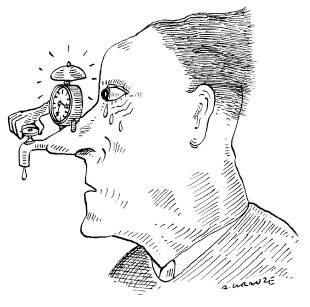 ANDRZEJ KRAUZEIf it’s seven o’clock on an August morning, I can pretty much guarantee you this is what’s going on at my house: I open my eyes, look out my bedroom windows at a lush summer landscape, and commence a sneezing fit of biblical proportions. My red eyes puff up, my nose runs, and the house shakes with every 40-sneeze episode, each lasting a few minutes, repeated for about an hour.

It’s a common complaint physicians hear from patients suffering from allergic rhinitis: upon waking, uncontrollable sneezing launches victims into the start of their day, blurry-eyed and itchy-nosed. Studies have confirmed the existence of the phenomenon, says Michael Smolensky, a chronobiologist at the University of Texas at Austin. “Allergic rhinitis starts to exacerbate during the nighttime sleep span,” he explains. “If you are not awoken at night, you find the most extreme complaints upon arising.”

For years, scientists have been picking apart the mechanics of peripheral circadian clocks. Numerous tissues, such as the liver, the gut, and the heart, have their own operating oscillators, which synchronize with the body’s main timekeeper, the suprachiasmatic nucleus in the hypothalamus. Recently, Sato Honma’s group at Hokkaido University Graduate School of Medicine in Japan went looking for a clock in the nose. One of Honma’s colleagues is an ear, nose, and throat specialist who wanted to learn more about morning allergy outbreaks. So they dissected out the nasal mucosa of mice to look for expression of so-called clock genes—rhythmically expressed drivers of a cell or tissue’s circadian behavior.

Honma and her colleagues found daily cycling in levels of the clock protein Per2 within nasal mucosa, peaking at the beginning of the dark period of each circadian cycle (Endocrinology, doi:10.1210/en.2015-1490, 2015). “It shows a very, very clear rhythm,” says Honma. “I think it’s quite similar to the one in the bronchus or lung or other parts of the body.”

Atsuhito Nakao of the University of Yamanashi in Japan says Honma’s results jibe with what has been suspected of circadian activity in the nose. And Nakao’s group has also shown that there is a relationship between circadian cycling and allergic symptoms in mice. For instance, disturbing the circadian clock, either by disrupting the suprachiasmatic nucleus or inactivating the Per2 gene, eliminated the time-dependent variations in allergic responses of the mice. More recently, Nakao’s team has demonstrated that normal clock function in mast cells—immune cells that release histamine during allergic reactions—is essential for the daily cycling in severity that mice exhibit during allergic responses in the skin (J Allergy Clin Immunol, 133:568-75, 2014).

The question then becomes, can doctors time treatments to catch tissues at their most receptive circadian point, thus easing the pain of long-suffering sneezers? It’s an idea that’s been applied to other conditions, such as asthma and cancer, says Smolensky, but not yet to allergy.

Corticosteroid nasal sprays are often used to treat allergy symptoms. Honma’s team showed that the nasal clock is sensitive to glucocorticoids, a feature common to other peripheral clocks, including the liver and heart. Bathing excised nasal mucosa tissue in the corticosteroid dexamethasone or injecting the drug into mice shifted the clock, depending on the time of day the drug was delivered. In vivo, the biggest delay in the clock came about when dexamethasone was given during the middle of the dark period; the biggest advance in the clock occurred when the researchers applied the drug just after the lights turned on.

Honma and her colleagues propose that using corticosteroids to relieve allergy symptoms might be most effective when they’re least likely to disrupt the nasal clock—which, extrapolating from their data, would be in the early evening for humans. However, the team has yet to show this in people.

Nakao, on the other hand, points out that it’s entirely possible that treating allergies at the time when the nasal clock is most susceptible to phase-shifting might be a more effective route. Last month, Nakao showed that shifting the clock either way in mast cells in vitro and in vivo by increasing Per2 expression is enough to suppress allergic reactions (J Allergy Clin Immunol, doi:10.1016/j.jaci.2015.08.052, 2015). “[Honma and her colleagues] have not shown that, in allergic rhinitis, the chronotherapeutic approach they suggest really works or not,” he wrote in an email. “This remains to be determined as an important question.”