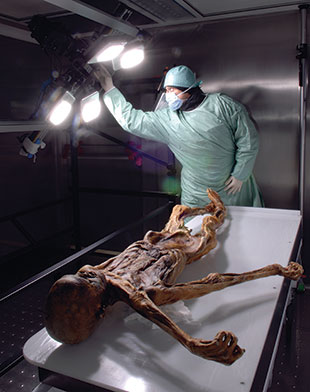 MUMMY, DEER: Biological samples found with Ötzi’s corpse may help researchers reveal more about the species with which he shared his Copper Age ecosystem.© SOUTH TYROL MUSEUM OF ARCHAOLOGY/EURAC/SAMADELLI/STASCHITZMany millennia ago, a springtime hike over the Italian Alps ended in murder. The victim, a man approximately 45 years old, lay face down in a glacier, an arrowhead buried in his shoulder, his gear—an axe, quiver, knife, and bags containing berries—scattered around him. Packed in ice, his body and personal effects had remained preserved for more than 5,000 years when two modern-day hikers stumbled across the scene in 1991.

Since the discovery of this mummy, the Tyrolean iceman nicknamed Ötzi has been spilling secrets from the past. Beyond his obvious archaeological significance, bits of grass, meat, and fur from Ötzi’s clothes and tools are opening a window on the ecosystems in which he lived and traveled.

Rollo and Luciani have examined the strands of animal hair for color, texture, and thickness and performed mitochondrial DNA analysis of white and grey hairs picked off Ötzi’s clothing. These hairs revealed that the red deer he hunted belonged to a western European lineage of Cervus elephas. Like many other species, including a grasshopper, brown bears, house mice, and several trees, the red deer survived the last Ice Age by seeking refuges in the peninsulas of southern Europe. In these refuges, isolated groups of red deer differentiated into at least three haplotypes. As the ice melted, the deer increased in number and spread out across the continent again, bearing the marks of their temporary separation in their genes. The western strain that Ötzi evidently pursued, however, went extinct during the 18th century, and the region was repopulated by an eastern lineage of deer that moved westward from the Balkans (PLOS ONE, 9:e100136, 2014).

Reconstructing ecological trends can help researchers and managers predict how populations of modern fauna might change in the future. “Over the last 200 years, the distribution and the genetic structure of red deer have been shaped by human factors, such as selective hunting, translocations, and habitat fragmentation,” Luciani says. “Ancient DNA studies from archaeological samples, like this one on the Copper Age red deer, can help to evaluate the changes that have occurred and identify threatened or endangered genetic lineages.”

For example, in an earlier study of mitochondrial DNA from animal hair on Ötzi’s remains, Luciani and her colleagues found that the iceman’s domesticated sheep have no known relatives in modern-day sheep lineages (PLOS ONE, 7:e33792, 2012).

Luciani’s research exemplifies “all the [diverse kinds of] information that the study of this mummy has yielded, in terms of archaeology, population genetics, and even conservation biology,” says Maria Ávila-Arcos of Stanford University who was not involved with the study.

The samples used in Luciani’s research are part of a collection now housed, along with Ötzi, in an old bank building in Bolzano, Italy, that was converted into the South Tyrol Museum of Archaeology. Since few other human mummies worldwide were formed at the temperature and humidity of a glacier, the museum “is an exercise in both research and conservation,” says Albert Zink, scientific director at the EURAC-Institute for Mummies and the Iceman.

As techniques for the extraction and analysis of ancient DNA improve, plant and animal samples from such specimens can help form a more complete picture of the Copper Age in this region. In future work, researchers including Zink and Luciani hope to study other samples, such as microbial spores, or the canid fur on Ötzi’s cap and boots, which might hold clues to the origins of domesticated dogs.

“There was a phase in the study of ancient DNA when there was a lot of skepticism about whether what we were seeing was real or contamination,” says Ávila-Arcos. But the method is gaining popularity, and has become a useful resource, she adds. “The more we look into ancient DNA evidence from human populations, the more we realize that the past has been more dynamic than we thought.”