ABOVE: The three sponge species whose names were up for auction—now called (from left to right) Acanthella saladini, Higginsia johannae, and Haliclona roslynae
COMPOSITE IMAGE: CARINA SIM-SMITH (LEFT); CLEVE HICKMAN AND ANGEL CHIRIBOGA (MIDDLE AND RIGHT)

One autumn day in 2019, Michelle Kelly and Carina Sim-Smith were cleaning out the storage room of the Auckland marine lab where they worked. Among the floor-to-ceiling units of shelves brimming with jars of alcohol-preserved sea sponge specimens were a couple of long-forgotten plastic boxes packed with hundreds of jars. Peering inside, “Michelle was like ‘Oh my goodness. Cleve’s sponges,’” recalls Sim-Smith, a marine scientist at ClearSight Consultants.

Cleve is Cleve Hickman, a retired Washington and Lee University marine biology professor who had collected the sponges nearly two decades earlier during a scuba diving expedition in the Galápagos Islands. He had sent the specimens to sponge expert Kelly in New Zealand, but due to a dearth of funding for laborious identification work, the sponges had gathered dust in storage for years. Now that they’d been rediscovered, Sim-Smith got to work identifying them, describing a total of 25 new-to-science species—each of which would need a name.

Traditionally, the person who identifies or describes a novel species chooses its scientific name. But Sim-Smith, Kelly, and Hickman decided that 3 of the 25 would earn their epithets in a less conventional manner. On December 31, 2020, as the clock struck 9:00 PM on the East Coast of the US, a trio of unusual auctions closed, granting the highest bidder—an unnamed retired biology professor who won all three auctions—the naming privileges for the species.

Such species-naming auctions have become a somewhat reliable fundraiser in conservation circles in recent years, says Paul Salaman, the president of the Galapagos Conservancy and the person who suggested the auction idea to Hickman.

Salaman started the trend himself. During a trip to Colombia as an undergraduate in 1991, he identified a novel species of songbird. Rather than naming the finch-sized green bird himself, Salaman organized a first-of-its kind auction. For the price of $75,000, US birder and conservationist Bernard Master dubbed the species Vireo masteri after himself. Salaman used the sum to buy 15,000 acres of Colombian rainforest earmarked for bulldozing. Now known as the Pangan ProAves Nature Reserve, the area “protects an immense amount of amazing biodiversity,” says Salaman. Since then, several other conservation groups have followed suit, organizing similar species-naming auctions. 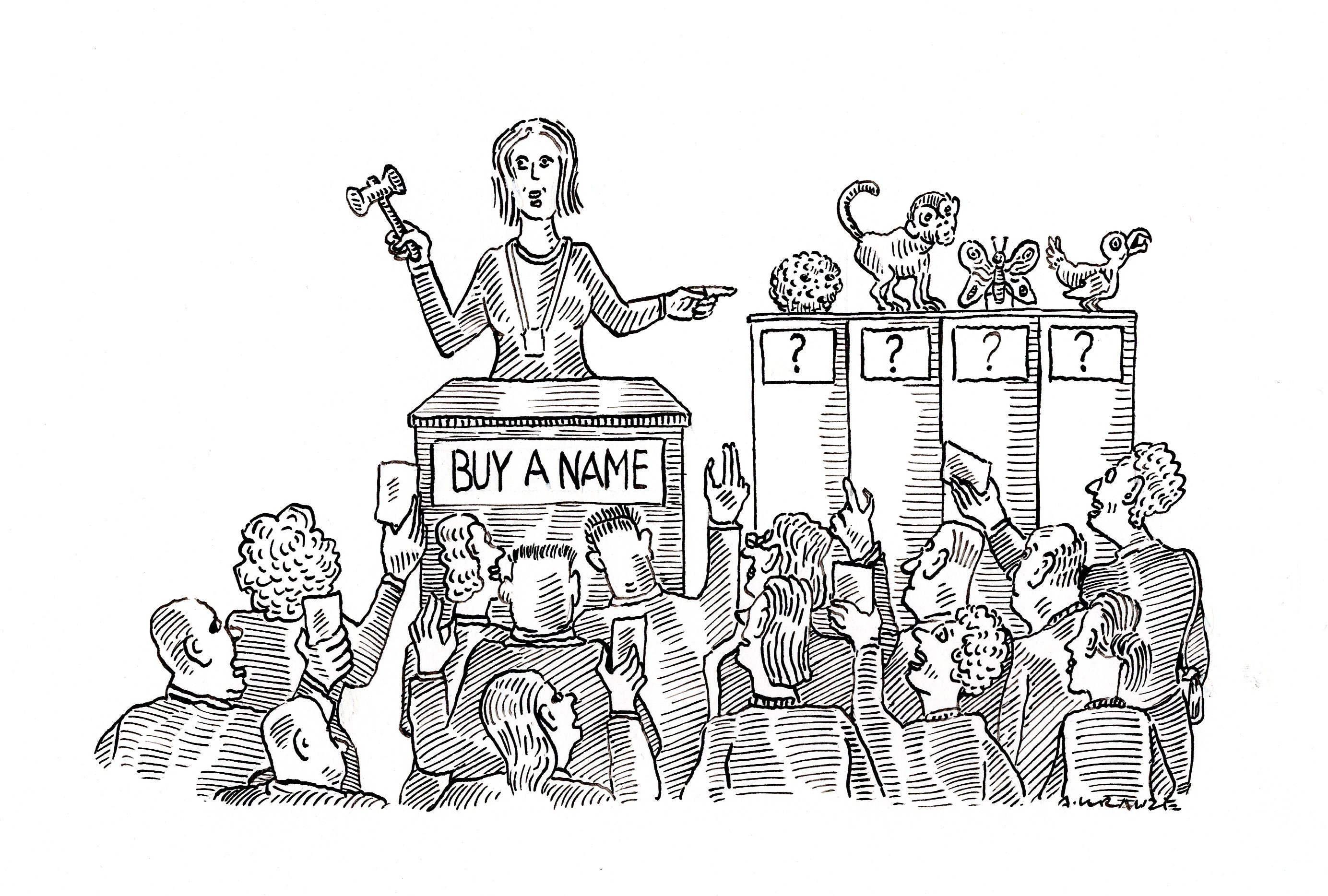 Choosing what a species is to be called is often considered a great honor, says Salaman. While common names can change over time, “the [scientific] name is the most important because it’s the one that sticks with the species.”

There are, of course, some rules governing animal nomenclature: a name should be unique, pronounceable, and accompanied by a published description and a type specimen—an individual to which the scientific name is officially attached, says Thomas Pape, an entomologist at the Natural History Museum of Denmark and the president of the International Commission on Zoological Nomenclature, the body that regulates animal names.

Aside from these regulations, taxonomists—or indeed paying members of the public—are free to bequeath species with names of their choice. “A species has a character; it’s almost like an art to give names,” says Astrid Schuster, a marine biology postdoc at the University of Southern Denmark. During her own work on Galápagos Islands sponges, Schuster named a species Racodisucla borisi in memory of her boyfriend who supported her work on sponges and died during her PhD. Sim-Smith and Kelly dubbed a New Zealand species that they described in 2015 Geodia ewok for the fictional intergalactic creatures.

In a forthcoming paper, Sim-Smith, Hickman, and Kelly formally describe the 25 new-to-science Galápagos sponges alongside their new monikers. Sim-Smith christened one Hemimycale harlequinus because its flamboyant color forms—orange, pink, and yellow—reminded her of a clown. Hickman named a handful after his family members, the location where he collected them, or a defining feature—common inspirations for species etymology. The sponge auctions’ winner chose the names of Acanthella saladini, Haliclona roslynae, and Higginsia johannae in tribute to his family and two people dedicated to conservation of Galápagos wildlife. One of these, H. johannae, honors Johanna Barry, the founder and first president of the archipelago’s namesake conservancy. “She is a very important person, and I’m very glad he named one of the sponges for her,” says Hickman.

Species-naming auctions are far from uncontroversial, however, particularly when commercial or political influences are involved. In 2005, for example, the GoldenPalace.com internet casino paid $650,000 to the name a Bolivian monkey Callicebus aureipalatii, the latter part of the name translating to “of the golden palace”—a move that drew some criticism at the time. Many people are strongly against auctioning names, explains Pape. “They find it unethical. They don’t want the pure or pristine act of naming species put into an economical framework.” But, he says, it’s not unusual for money to play a role in this process. New species have often been named after funders of scientific expeditions, for example.

Salaman also dealt with a species-naming controversy during his previous role as CEO of the Rainforest Trust, when he organized a similar auction for a dozen new-to-science species. An environmental building company paid $25,000 to name a blind, worm-like amphibian Dermophis donaldtrumpi to poke fun at the then-president of the United States. “It didn’t go down too well,” says Salaman. “We got some threatening phone calls.” For Schuster, such examples highlight some of the risks around species-naming auctions. “Once a name is out there, it stays there,” she says. “If the name is associated with something negative, then it’s still out there.”

A species has a character; it’s almost like an art to give names.

Indeed, it’s difficult to change a scientific name once in use, says Pape. The commission has denied petitions to rename a small cave-dwelling beetle called Anophthalmus hitleri, described in 1937 before Hitler committed the worst of his atrocities, because ethical issues are beyond its purview. “We usually hold back on judging names in terms of their quality,” says Pape. “Quality is subjective.” The commission will occasionally step in to resolve other problems, though. In the case of an amphipod called Gammaracanthuskytodermogammarus loricatobaicalensis, the unwieldy moniker was deemed invalid for practical reasons, says Pape. “It’s absolutely impossible to remember, impossible to pronounce, cumbersome to put in spreadsheets.”

A scientific name may also change if there’s a taxonomic problem. Scientists sometimes disagree over what constitutes a species, and occasionally a purportedly novel species may turn out not to be novel after all. “Names are made for species, but species are just hypotheses about units of nature,” says Pape. He says he doesn’t have a problem with naming auctions as long as bidders are aware of this point.

For many conservationists, the benefits of auctions far outweigh the risks. At around $7,000 apiece, the sponge-naming auctions have raised $20,250 for the Galapagos Conservancy. The money, Salaman says, will help fund future surveys of the islands’ marine life, along with sponge taxonomy work—an activity that experts say is critical for conservation but woefully underfunded. “It’s difficult to raise the money needed for exploring and naming life on this planet,” says Pape. Schuster, for example, describes sponges in her free time. “To get funding for just doing taxonomy, it’s nearly impossible nowadays,” she says.

Many more sponge and other animal species—in oceans, museum collections, and perhaps storage cupboards—still await description. While naming privileges for some of these may end up on the auction block, for those who’d like name a species without a price tag, training in sponge taxonomy is one option, says Sim-Smith. “There are more sponges than we can describe in a lifetime.”