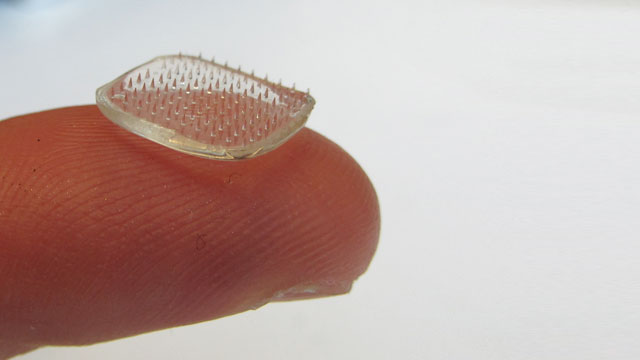 STUCK ON YOU: A patch of swellable microneedles like this may one day help heal external and internal wounds more effectively.KARPLAB, WWW.KARPLAB.NET.

Bioengineer Jeffrey Karp is used to finding inspiration in unusual places. He’s looked to porcupines’ barbed quills and the sticky pads of geckos’ feet, for example, to develop medical adhesives. And one afternoon a few years ago he sat in his office with some of his lab members Googling parasites.

Karp, an associate professor at Harvard Medical School and Brigham and Women’s Hospital, was hoping to create a new medical adhesive for wet soft tissues, such as the gut’s lining or the exposed flesh of burn victims. “There’s been very minimal innovation in the clinic in terms of adhesives in the past several decades,” he says.

He and his team reasoned that they could model this new adhesive on the tricks of a parasite that glommed...

The group stumbled upon a paper that mentioned the spiny-headed worm (Pomphorhynchus laevis), which lives inside the guts of fish (PLOS ONE, 6:e28285, 2011). An electron micrograph in the paper showed the worm’s unusual method of attaching itself: the tip of its proboscis swells once inside its host’s flesh, anchoring the worm to the gut.

Karp’s team developed an adhesive device that consists of a sheet of microneedles whose tips swell upon contact with water, which could be used to adhere skin grafts to wounds, deliver drugs to target tissues, and for many other potential applications (Nat Comm, 4:1702, 2013).

To make the microneedles, the researchers used two layers of material. The cores are polystyrene, a plastic often used for making disposable cutlery and containers. An outer layer at the tips is made of a combination of polystyrene and super-absorbent polyacrylic acid, which is used in diapers.

The researchers tested their needles in a transparent agarose gel and then in raw chicken and in skin from a pig. “We were surprised that our concept worked so well,” says Seung Yun Yang, a postdoc who helped design the microneedles. “Previously no one showed this kind of responsive adhesive system.”

The next challenge was to figure out what to do with the novel needles. “It’s easy to develop new technology, and it’s easy to find problems, but what’s most challenging is connecting the right technology with the right challenges,” says Karp.

He found the beginnings of an answer at a 2011 research symposium, where he met Bohdan Pomahac, a Brigham and Women’s Hospital plastic and reconstructive surgeon who ultimately became a collaborator. Pomahac, who was involved in the first full face transplant in the United States, thought the adhesive needles could be useful in adhering skin grafts in burn victims.

Skin grafts run into three major problems, Pomahac says. The leading cause of graft loss is mechanical shear, because the graft is simply not stuck on tightly enough and slides around without adhering to the tissue underneath. The second is pooling of liquid underneath the skin graft, and the third is infection. “This technology had the possibility to fix all of these,” Pomahac says.

Currently, skin grafts are typically held down with staples or sutures around their edges, which contributes to the risk of liquid pooling where the skin is not held down. Karp’s team envisions sticking the sheets of swellable microneedles on top of new skin, like spiky Band-Aids or arrays of thumbtacks, so that the needles go straight through and adhere in the wet tissue underneath, all across the graft. “Staples or sutures provide only one point of contact, while microneedles can secure an entire area in multiple points,” Pomahac says. Tests of pig skin grafts on chicken muscle tissue confirmed that the microneedles were more effective than staples at preventing grafted skin from separating from the tissue.

Karp’s team also released fluorescently labeled Escherichia coli into the site of their in vitro pig skin grafts. The bacteria infiltrated the areas around the staples, but were less likely to make it down into the flesh around the microneedles, which formed tighter junctions and left less room for pathogens to squeeze in.

The researchers also showed that the swellable tips could suck up drugs, return to their normal size as they dried out, then slowly release the drugs when placed in water. The microneedles could deliver antimicrobial substances or anti-inflammatory drugs to skin graft sites while holding them together, Pomahac says, further reducing the risk of infection and speeding healing time.

Karp and colleagues will now test the device in live pigs and then eventually in humans. They are also working on developing swellable microneedle adhesives that can dissolve inside the body for use by surgeons repairing the intestine and other internal tissues. These internal adhesives could replace sutures, which are hard to tie in confined spaces.

“Now, with advances in microscale properties, you can look at how to get something better than the barbed suture of the past,” says Roger Narayan, a biomedical engineer at North Carolina State University who was not involved in the study. “I think it’s definitely exciting work that Karp and his coworkers have done.”

Jeffrey Janis, a professor and chief of plastic surgery at Ohio State University Hospital who worked with Pomahac on the first full face transplant in the U.S., says he thinks the microneedle arrays could solve the “traditionally vexing problem” of adhering skin grafts by allowing multiple points of fixation, while potentially saving time in the operating room. “This most definitely is better than the old thing, if it works,” he says.

Preliminary estimates from manufacturers put the cost of making each patch, including the cost of materials, at $0.50 to $5, according to Karp. The molds for making the patches can cost up to $1,000 per square inch but can be reused.

Pomahac says that he hopes to use the parasite-inspired microneedles in surgery someday, although there are never any guarantees that a new technology will turn out to be practical in the clinic. In all his years of dreaming up possible innovations for skin graft adhesion, such as disposable staples or glues, he never thought of something like the swellable microneedles. “It certainly is exciting to try it and see what happens.”

“What I find remarkable is when we go outside or go to the aquarium or go to the zoo or start to learn about animals around us, we uncover solutions to incredible problems,” Karp says.