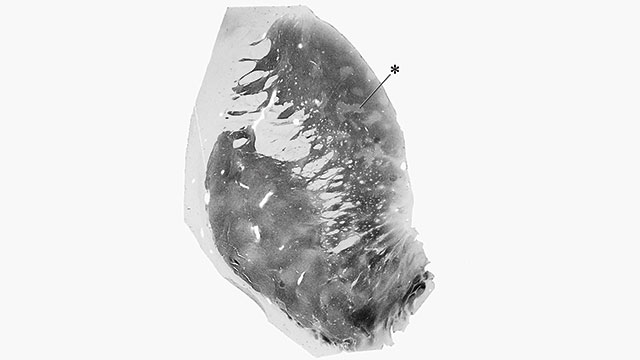 TRICKY SPOT: Neural structures called striosomes, such as the one highlighted by an asterisk in this section of striatum from a human brain, may aid in complex decision making.GRAYBIEL LAB, MIT

Many of life’s trickier decisions share a common denominator: the options all have both pros and cons. This is what psychologists call a “cost-benefit conflict,” and it’s something that rats and mice in Ann Graybiel’s neuroscience laboratory at MIT face on a regular basis.

Graybiel aims to understand how brains evaluate costs and benefits, and why the capacity to do so is sometimes impaired in neurological and neuropsychiatric disorders such as Huntington’s disease, anxiety, and depression. Graybiel and her colleagues have pinpointed the specific brain circuit—consisting of prefrontal cortical neurons, neurons in structures known as striosomes, and inhibitory interneurons that suppress the activity of striosomes—that appears to control this type of decision making. In a study published...

Graybiel has long been fascinated by the striatum, located in the basal ganglia in the deep forebrain. It was assumed to be primitive, “and not mixed up in any kind of terribly interesting behavior,” she explains. But that view has since changed. The brain region has many projections into the prefrontal cortex, is innervated by midbrain dopaminergic circuits, and is thought to act as a “relay station” between cognitive tasks and motor-related tasks.

Disrupting the connection between cortical neurons and the striosomal neurons made the rodents more likely to choose the option with the bigger payoff, and greater risk.

In 1978, Graybiel’s lab found small, labyrinthine structures within the striatum, which they called striosomes, or striatal bodies (PNAS, 75:5723-26). On further investigation, Graybiel and collaborators discovered that in a normal brain facing a cost-benefit conflict, neurons of the prefrontal cortex stimulate the striatum’s inhibitory interneurons, which in turn repress the striosomes’ activities. In essence, this striatal circuit controls whether the cortex can talk to the striosomes or not. It’s amazing, Graybiel says, that a deep forebrain structure can control what the cortex—considered the master controller of the mammalian brain—activates, giving the striatum “so much influence on affect and motivation, as well as movement.”

To test the circuit’s importance to cost-benefit conflict decision making, Graybiel’s team created a motivational conflict for rats and mice, designing a T maze that mimicked a task used clinically to assess the behavior of patients with depression or anxiety. After getting to know the maze, rats and mice were given two options: to follow a dangerously well-lit pathway (the rodents prefer to avoid bright light) that had deliciously rich chocolate milk at the end, or to choose a dimmer pathway with weaker chocolate milk. Normal rats and mice decided to avoid the riskier pathway, opting for the low-reward, low-risk route, about half the time.

But disrupting the connection between cortical neurons and the striosomal neurons using optogenetics made the rodents more likely to choose the option with the bigger payoff, and greater risk (Cell, 161:1320-33, 2015). “It looks like they no longer care about the cost . . . or they just have to have a lot of [the] good” to choose a given option, Graybiel explains.

In the new study, Graybiel’s team chronically stressed rats and mice by either putting them in a cloth bag for a short period, or shocking their feet briefly every day for two weeks, which Graybiel thinks is the rodent equivalent of sitting in a traffic jam every day. The stressed rodents’ behavior changed, mirroring decision making in the rats and mice whose circuits had been optogenetically altered. They were significantly more likely to choose the dangerous-looking pathway with the bigger payoff, even if the researchers tried to tempt them by adding extra chocolate to the milk on the dimmer side. This effect lasted for months (Cell, 171:1191-1205.e28, 2017).

“It was stunning,” says Graybiel. “We couldn’t tell the difference between an animal in which its prefrontal cortex had been disconnected from striosomes . . . and the behavior of a stressed animal to which nothing else had been done.”

Graybiel thinks stress disrupted the cortical neurons’ ability to suppress the striosomes quickly enough, which in turn became overexcited. To test this, her team optogenetically excited the high-firing interneurons, thereby inhibiting the striosomes, and found that this restored normal behavior in the stressed rodents.

There is some evidence that stress can have a similar effect on human decision making. Mara Mather, a psychology researcher at the University of Southern California, has observed that people placed under stress—in this case, they briefly dipped a hand in ice water—appeared to learn better from positive feedback about a task they were asked to do than when given negative feedback (Psychol Aging, 28:35-46, 2013). She suggests that the stressed rats might have been similarly focused more on the reward of the concentrated chocolate milk than on the cost of going down the riskier pathway. This and other studies on stress and decision making “fit with a broader literature [showing] that, under stress, it’s much harder for people to avoid their addiction, [such as] if someone is trying to quit smoking or go on a diet.”

There’s also evidence that the human striatum plays a role in decision making. University of Amsterdam cognitive neuroscientist Birte Forstmann and collaborators performed brain scans on human subjects as participants tried to determine whether the majority of dots on a screen were moving in a coherent direction. The researchers found that under speed stress, the striatum and a motor-associated area in the cortex—which together are thought to be involved in making voluntary action plans—“started to show a lot of activation,” she explains (PNAS, 105:17538-42, 2008).

In another study, Forstmann and colleagues examined how patients with lesions in their dorsal striatum would handle the same task (Cortex, 85:37-45, 2016). These patients were less cautious than controls. Although the results are preliminary and based on only five patients, she notes, they suggest the striatum plays an important role in exercising caution during decision making.

Although it’s unclear whether the circuit works the same way in humans as in rodents, Graybiel thinks the neural pathway may be involved in many conditions where decision making is altered, such as addiction, anxiety, depression, and PTSD. “Ultimately, there must be common circuits that are being affected,” she says. “And so my hope is that we’ve found one such circuit and that . . . we can help people. That’s the whole point of our research.”