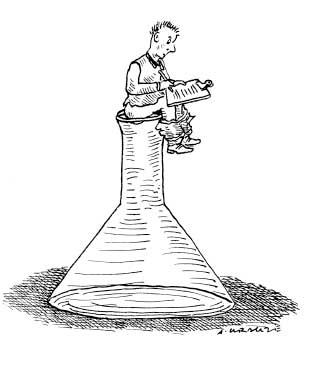 ANDRZEJ KRAUZENicole Haggerty carefully floated wax paper on the water in her dorm room toilet, then sat down to do her business. Once she was finished, the University of Michigan freshman used a small plastic scoop to sample a teaspoon of her feces and placed the scoop in a tube filled with a solution that removed any excess oxygen from the excrement. She then placed the tube in a little baggie and put it aside. The next day she would analyze the bacteria within.

“I remember telling my mom, ‘I have to poop for class,’” Haggerty said. “It was the funniest thing. ‘Anything to get an A,’” she’d joked.

Haggerty had enrolled in the research section of Biology 173 upon the recommendation of other undergraduates who had taken the new experimental biology course. Microbial physiologist and ecologist Tom Schmidt had recently joined the University of Michigan faculty to...

With a five-year, $1.5 million grant from HHMI, Schmidt launched the program in the winter semester of 2015, accepting 40 students into the research arm of Biology 173. This year, he has accepted 80 each semester. (The HHMI grant also supports a parallel program in the chemistry department, with projects focused on solar cell technology and snow chemistry.) So far, the microbiome project has focused on the effects of dietary supplements. During the first semester, students randomly selected to the treatment group mixed 40 grams of Bob’s Red Mill potato starch in 8 ounces of water and drank it down every day for two weeks. In the fall of 2015, the class tried different kinds of fiber, and in the winter of 2016, students, including Haggerty, ingested psyllium, another form of dietary fiber. “Each semester I view as a new experiment,” Schmidt says.

The students, including those assigned to the control group who did not ingest any supplement, collected samples—breath, skin, and fecal—before and during the treatment period, and brought them to the lab for analysis. For quality-control reasons, Schmidt says, his lab does the official processing of the samples, which includes analyzing the metabolites produced by gut bacteria and sequencing 16S ribosomal RNA genes to identify microbiome composition, but the students also bring in samples that they analyze themselves, learning the techniques in the classroom lab, and Schmidt shares the project data with them once the real samples have been processed. In the first semester, the group found that ingesting resistant starch—a type of compound found in fruits and vegetables that cannot be broken down by human enzymes and thus requires the help of the microbiome for digestion—increased microbial production of butyrate, which has been suggested to have a variety of positive effects on human health. Schmidt and his colleagues currently have a paper reporting these results under review and are still mining the data from the second semester. “The educational goals and the research goals overlap,” says Schmidt, “so it’s worked out well for everybody.”

It’s been insanely cool to look at the all the different species that make up our individual microbiomes.—Nicole Haggerty,
University of Michigan

A few years ago, Noah Fierer at the University of Colorado at Boulder organized a similar project to involve students in microbiome research. Teaming up with Greg Caporaso at Northern Arizona University and Rob Dunn at North Carolina State, Fierer recruited undergraduates at all three universities to sample their poop once a week for an entire semester to look for temporal variation in individual microbiomes. At UC Boulder, the project was tied to a general microbiology lab course, in which students (both those who volunteered their samples and those who did not) got to do sample analysis and play around with the data Fierer and his colleagues were generating. The team published its results in 2014 in Genome Biology (15:531). “We were not just doing this for fun; we were trying to do some science,” Fierer says. “I think there are a lot of opportunities for coursework where the students actually generate usable data.”

One challenge in organizing student projects such as those at the University of Michigan and the multi-institution project led by Fierer and his colleagues is obtaining approval from the institutional review boards (IRBs) for doing research on human subjects. But there are plenty of other ways to involve students in research that avoid this logistical hurdle. Caporaso, for example, would like to continue to bring research into his bioinformatics classes at Northern Arizona University, especially now that public online repositories provide easy access to large data sets. “We might as well have [students] working on assignments with real data rather than having them do contrived homework,” he says.

Fierer is also moving away from human-subjects research while sticking with the student research model. Next fall, he is teaching a course on microbial ecology in which he plans to have students collect samples from the environment (soil, leaves, insects, etc.) and analyze the associated bacteria. “They’re actually going to do all the lab work, all the way from DNA extraction to sequencing,” he says. “And that’s something I think we couldn’t have done a couple of years ago. The sequencing is getting fast enough and cheap enough that you can start bringing it into the undergraduate classroom.”

Such student research projects carry many benefits, Fierer notes. In addition to teaching students about the scientific process, taking a project from beginning to end introduces them to a variety of research fields. For his 2016 fall class, for example, Fierer plans to hit on microbiology, molecular biology, genetics, ecology, and statistics. “It’s a great way to learn about a lot of different things that’s not a boring lecture,” he says. Involving students in the research is also helpful for keeping them engaged all semester long, Fierer adds. “For the students it’s always more fun to be involved in real scientific research instead of just hearing about research that was done.”

Haggerty couldn’t agree more. “I’ve loved it,” she says. “I’ve felt like I was an actual part of this research. . . . It’s been insanely cool to look at the all the different species that [make up] our individual microbiomes.”