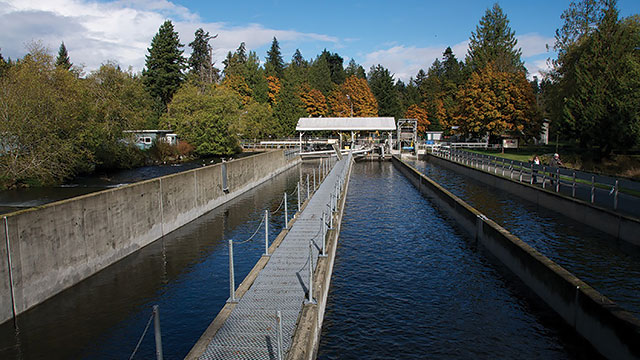 HELD BACK: Pacific salmon raised in hatcheries, such as the Big Qualicum Hatchery in British Columbia, are less likely than wild-born fish to survive ocean life.DAVID WILLIS, SALMON ENHANCEMENT PROGRAM

When captive-bred Pacific salmon leave their hatcheries to swim free in the ocean, they soon take on the look of their wild counterparts, with the color of their sides changing from red to silver, the better to mesh with their new saltwater digs. But in important, less visible ways, the fish never shake the legacy of their domestic upbringing: They are less likely than wild-born salmon to survive in rivers and the ocean, and if they live long enough to reproduce, they produce fewer offspring.

Just what’s wrong with these hatchery-reared fish? With wild stocks on the decline and aquaculturists stepping in to try and bolster Pacific salmon populations, answering this question—and, if possible, increasing the fitness of...

Some researchers suggest that hatchery rearing selects for alleles for certain traits, such as a tolerance for crowding, that make fish more likely to thrive in confinement, and that these same features work against the animals in the wild. One 2012 study of steelhead trout (Oncorhynchus mykiss) seemed to lend support to that theory, finding that the offspring of the most reproductively successful captive fish were the least likely to spawn successfully in the wild (PNAS, 109:238-42).

But biologist Louis Bernatchez of Quebec’s Laval University wasn’t satisfied with this genetic-adaptation explanation. In Canada’s Pacific salmon hatcheries, “there’s a lot of genetic exchange between hatchery fish and wild fish,” because wild-hatched fish sometimes stray into the hatcheries to spawn, and hatchery-reared fish may reproduce in the wild, he says. “It was hard to believe that selection alone could be involved in explaining the performance differences that we see between hatchery and wild.”

Quite a few important biological functions were affected.

So Bernatchez and his colleagues set out to search for evidence of a different kind of hatchery adaptation, detectable in the epigenome rather than the genome. They trapped juvenile coho salmon (Oncorhynchus kisutch) just before, or a few weeks after, release from hatcheries on two rivers in British Columbia, and wild juveniles from the same area. Then, they collected and sequenced samples of the fish’s muscle tissue. When they compared the two populations’ genomes, the researchers found no significant genetic differences. But compared to the genomes of their wild counterparts, 100 regions on the genomes of hatchery-reared salmon were differentially methylated, and of those, 89 were hypermethylated (PNAS, 114:12964-69, 2017).

“That’s a pretty clear-cut and striking result,” Bernatchez says, adding that the results imply “that those genes are downregulated, or less expressed, most likely, in the hatchery fish relative to wild fish.” Some of the hypermethylated regions contain genes for immunity, the transmission of neural signals to muscles for locomotion, and appetite and feeding behaviors. “Quite a few important biological functions were affected,” he adds, indicating that the methylation patterns may play into the fitness differences between wild and hatchery-reared fish. 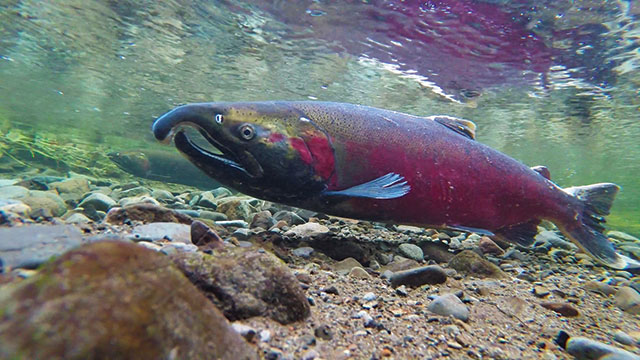 “I think it’s a good first step” toward discovering whether the hatchery environment induces epigenetic change, says Mackenzie Gavery, a postdoc at the University of Washington and NOAA’s Northwest Fisheries Science Center who studies epigenetics in aquatic ecosystems and was not involved in the study. But it’s not clear whether the epigenetic differences found by the team persist over the years that the fish live in a shared environment, she says, and thus whether they could explain the persistent fitness differences between the two types of salmon.

“I think it’s a very important finding,” comments Erika Eliason, a comparative physiologist at the University of California, Santa Barbara. But, like Gavery, she thinks the case of the unfit hatchery salmon is far from closed. An important next step will be to look for direct evidence that the epigenetic differences have functional consequences, she says. She’d also like to see the analysis performed on other tissue types, such as the gill—an area crucial for fishes’ transition from freshwater to ocean living.

Bernatchez acknowledges that the study doesn’t draw a clear causal link between the epigenetic differences and survival. As another step in that direction, his group is now running a similar comparison on adult fish (hatchery-raised salmon have one of their smallest fins clipped before release so that they can be distinguished from wild-born salmon later). Answering the genetic vs. epigenetic question, and determining whether the epigenetic differences seen in hatchery fish are heritable, could be consequential for conservation efforts, he says, because heritable changes “would not disappear or vanish as easily as . . . if those changes were totally environmentally driven and not passed along from one generation to the next.” Altering aspects of the hatchery environment such as overcrowding and diet might help mitigate epigenetic changes, he says.

Gavery agrees that with greater understanding, it might be possible to manage hatcheries differently to boost fitness: “If it’s an epigenetic change, if you can figure out . . . [how] to reduce that impact, you can in essence make a better hatchery, make more-robust fish.”