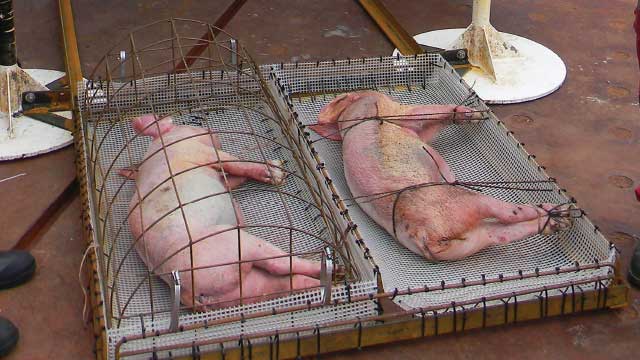 When forensic entomologist Gail Anderson gave talks to police officers about what insects can do to dead bodies, inevitably somebody would ask her what happens to bodies dumped in the ocean. But with almost no work done on human decomposition in marine environments, “I couldn’t give them an answer,” the Simon Fraser University researcher says.

Around 2000, Robert Teather, a decorated officer in British Columbia’s Royal Canadian Mounted Police (RCMP) and founder of its Underwater Recovery Team, asked Anderson why she didn’t take matters into her own hands and do some marine studies herself. The answer, she told him, was simply a matter of resources. “I said, ‘I’d love to, but you’d need boats, and you’d need divers,’” she recalls. “And he said, ‘Gail, we have boats [and] divers.’”

So Anderson teamed up with the RCMP, along with the...

Anderson didn’t pursue the matter further until several years later, after giving a talk at the University of Victoria. “I was presenting my usual murder and maggots stuff,” she says, but she also briefly mentioned the work she had done with pig carcasses in Howe Sound. After her lecture, marine biologist Verena Tunnicliffe approached her with an offer she couldn’t refuse: “[She] said, ‘I’m about to put a camera on the bottom of the ocean. Would you like to put a pig under it?’” Anderson recalls.

Tunnicliffe had helped develop Ocean Networks Canada’s Victoria Experimental Network Under the Sea (VENUS) observatory, an underwater lab controlled from the surface via fiber optic cables. VENUS was the perfect opportunity for Anderson to test what happens to pig carcasses at 100 meters deep in the Saanich Inlet and to monitor decomposition 24/7. “It was terribly exciting,” Anderson says. “I was able to control my camera on my laptop [from] anywhere in the world.”

The interesting thing is, you can skeletonize a dead body in just a few days.—Achim Reisdorf,
University of Basel

Anderson and her colleagues ran the experiment with a single pig carcass per year for three consecutive years. The first two carcasses were quickly scavenged by crustaceans, including larger species such as squat lobsters (Munida quadrispina),  Alaskan prawns (Pandalus platyceros), and Dungeness crabs (Metacarcinus magister), as well as small amphipods commonly called sea lice (Orchomenella obtusa). But the third carcass stuck around, seemingly unchanged, for nearly three months. Then, suddenly, the scavengers swooped in and skeletonized the pig’s body (PLOS ONE, 9:e110710, 2014).

“The driving force in the whole thing was oxygen,” Anderson explains. The researchers had placed the weighted carcasses in a spot that was, at times, almost completely devoid of oxygen, but would receive flushes of oxygenated water. The first two carcasses were deployed at times of relatively high oxygen levels, while the third was placed when the water was almost completely anoxic. Then, following a seasonal freshwater flush, the crustaceans and other organisms showed up. “Suddenly I turned the camera and there was a sea of fish—the oxygen had come back,” Anderson says.

Given the dramatic effect of the local conditions, Anderson and her colleagues decided they needed to repeat the experiment in different locations. Taking advantage of another VENUS node in the Strait of Georgia, the researchers sank a pig to 300 meters and watched with anticipation. “Within half an hour there were a whole bunch of sharks,” Anderson recalls; the carcass was completely devoured. “It was a hit video,” she joked, but it didn’t tell them much about decomposition in the absence of predators.

So the researchers developed a cage system and sent down two more carcasses, one in the cage and one uncaged. The sharks came again, but for whatever reason they were not as efficient as this time, biting at the uncaged carcass but leaving it relatively intact. Then came the amphipods. “Within a couple of hours, the carcasses were covered,” says Anderson, who affectionately refers to the amphipods as “maggots of the sea.” Within a few days, the amphipods had stripped the carcasses of flesh (PLOS ONE, 11:e0149107, 2016).

“The interesting thing is, you can skeletonize a dead body in just a few days,” says Achim Reisdorf, a paleontologist at the University of Basel’s Institute of Geology and Paleontology who has collaborated with Anderson in the past but was not involved in these studies. “That’s really, really fast, and that’s a really important result of the study.”

The amphipods also appeared to repel all other animals, even the sharks, which would take a bite of the pig carcass and then immediately spit it out and send the amphipods shooting through their gill slits. And it may not just be the amphipods’ presence and bites that drive away other organisms; Anderson suspects that the tiny crustaceans were somehow causing the decline in local oxygen levels that she and her colleagues recorded. Unlike Saanich Inlet, the Strait of Georgia is normally well oxygenated, “but when the amphipods were there, oxygen just dropped like a rock,” she says. “I think that was driving the [other] animals away.”

This finding may be of use to forensic scientists, Anderson notes. Although more work is needed, she speculates that there might be ways to detect that change in oxygen levels to help recovery divers locate a body. She also wonders if the amphipods’ chomping might be audible with special equipment. “On land, you can hear [maggots] when you get close,” she says. “So I suspect you’re going to be able to hear the action of the little amphipods.” Meanwhile, her collaborator Lynne Bell is examining the pigs’ skeletal remains to look for physical evidence of the feeding frenzy. “Marks made by insects [can be] mistaken for torture,” says Anderson. “It’s very important to be able to understand these kinds of things.”

“I believe that studies like this are very valuable to the field of forensic science, as they allow forensic experts to increase the accuracy of their postmortem interval calculations,” says Michael Humphreys, a forensic scientist at the Solano County, California, Sheriff’s Office who has studied decomposition patterns in freshwater environments. Of course, he notes, the processes will likely differ based on climate and other factors, so similar studies should be carried out in different areas and at different times of year.

Anderson couldn’t agree more. “Ocean Networks Canada has gone into much deeper water, and that is our hope next.”