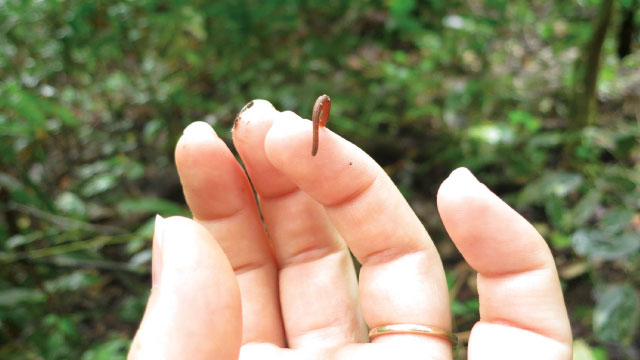 FOLLOW THE BLOOD: Researchers are using the DNA stored in leeches’ meals to study animal biodiversity.© AMNH/L. BERNIKERIn 2009, a leech made headlines after it helped catch a criminal in Australia. Two burglars had assaulted and robbed a 71-year-old woman in her isolated home in the Tasmanian forest, where the bloodsuckers are widespread. The leech, which had latched onto one of the thieves to feed, plopped off at the scene of the crime in 2001. Investigators extracted the perpetrator’s DNA from the invertebrate and cracked the case nearly eight years later, when the robber’s blood showed up as a match after he was arrested for an unrelated offense.

But leeches aren’t just useful at crime scenes. These creatures’ sanguineous appetites have also come in handy for scientists, who are hoping to use them to solve another mystery: the diversity of animals, particularly those hidden deep within forest...

Leeches are a group of segmented worms primarily found in freshwater habitats, although a few species live in the oceans and on land. Despite their reputation, many don’t feed on blood, instead eating earthworms, snails, and other invertebrates. The bloodsucking (hematophagous) leeches inhabit a number of biodiversity-rich regions, such as the rainforests of Southeast Asia, Australia, and Madagascar.

Ida Bærholm Schnell, a postdoc at the University of Copenhagen, says that conversations with employees at Copenhagen Zoo motivated her and some colleagues to investigate whether they could use hematophagous leeches to identify elusive animals within biodiversity-rich regions. A zookeeper had been bitten by a leech during a jungle trek in Malaysia, and he and his coworkers wondered whether it would have been possible to find traces of his DNA within the little critter.

If scientists could find DNA from other animals within leeches’ blood meals, the team realized, the worms might serve as a tool for biodiversity studies. To examine this possibility, Schnell and her colleagues collected Haemadipsa—a genus of hematophagous, terrestrial leeches—from the densely forested Central Annamites region of Vietnam. After analyzing the DNA in 25 of the creatures’ blood meals, the researchers found that 21 specimens contained mammalian DNA sequences from various animals, including recently discovered species, such as the Annamite striped rabbit, and threatened ones, such as the serow, a goat-like ungulate (Curr Biol, 22:R262-63, 2012).

To their surprise, Schnell says, the researchers also learned that mammalian DNA could last in leeches for at least four months. “The leeches conserve the DNA, in a way,” she explains. “They inhibit the digestion [of DNA], and they only have a very limited number of bacterial species in their gut.”

This study got some members of the scientific community excited about the possibility of using leeches for biodiversity surveys, says Michael Tessler, now a postdoc at the American Museum of Natural History. The findings from Vietnam motivated him and his colleagues to conduct follow-up studies to further refine the method. “Our objective was to see whether we [could] actually put this into practice,” Siddall, who was Tessler’s PhD supervisor at the time, tells The Scientist.

For one study, Tessler, Siddall, and their colleagues gathered about 750 Haemadipsa leeches from various habitats, including farms, forests, and riversides, in China, Cambodia, and Bangladesh. The treks weren’t for the squeamish: one particularly memorable moment for Siddall was being covered head to toe in leeches on a rainy collection day in Cambodia. “When it rains, it is glorious for leeches—you get so many of them,” he says. “[After] I made the call that we were done for the day because we ran out of bags and containers to put them in, I turned around and I had leeches going up my back [and on] my hair, my beard, and my neck.”

After dissecting the leeches to isolate the parts of the digestive tract that contained the blood meal, the team extracted, then amplified and sequenced the DNA using vertebrate-specific primers. “We spent some late nights in the lab chopping up leeches” under a microscope, recalls Sarah Weiskopf, who was then a master’s student at the University of Delaware.

A key observation from this analysis was that individual leeches appear to feed on a wide variety of animals, and among leech species there are no clear preferences for a particular prey (Syst Biodivers, doi:10.1080/14772000.2018.1433729, 2018). Identifying the feeding habits of different species is important, Siddall explains, because “if your sampling is biased, you want to know that it’s biased.” Although it appears that the leeches examined in the latest analysis can feed on all kinds of animals, it’s possible that some species might have specific host preferences, he adds. “There’s not a large body of literature to tell us what various species of leeches feed on. . . . [But] we’re getting that information now.”

This knowledge will be important for future leech studies, says Andreas Wilting of the Leibniz Institute for Zoo and Wildlife Research in Berlin who studies biodiversity but didn’t take part in this work. In future biodiversity analyses, researchers will need to include the detection probability of the animals based on the leeches’ distribution and feeding behavior, he adds. “It is important to highlight that more detections in the leeches do not always relate to higher abundance of [the identified] species in the area.”

In a second study, the team compared the leech-based biodiversity survey to camera traps, one of the most popular and well-established techniques for documenting wild animals, in four Bangladeshi forests. “Camera traps are a really common way to study mammal biodiversity in the tropics, but it takes a long time and they can be expensive,” says Weiskopf, now a biologist at the US Geological Survey. “So we were interested in seeing if there was another way.”

These findings suggest that the two methods would “nicely complement each other,” says Sébastien Calvignac-Spencer, a researcher who investigates the use of blowflies, another bloodsucking critter, as a biodiversity tool at the Robert Koch Institute in Berlin. “I think [both papers] are important in the sense that they will show practitioners—people who are doing biodiversity monitoring—that it makes sense to collect leeches.”

However, Calvignac-Spencer, who wasn’t involved in the leech studies, notes that while terrestrial bloodsucking leeches are a promising tool, they’re not present everywhere. For example, they aren’t found in some of the hotspots for biodiversity, including areas in Africa and South America. This is where other invertebrates, such as blowflies—which are widespread across the globe—come in handy, he adds.

Schnell notes that while the two recent papers (which she didn’t take part in) both used older, low-throughput Sanger sequencing methods, “the aim is to go from one leech, one DNA sequence, to many leeches in one high-throughput sequencing analysis.” In a soon-to-be published study, Schnell, Siddall, and their colleagues collected and processed more than 3,000 hematophagous terrestrial leeches from five regions around the world, including Madagascar, Australia, and Southeast Asia. Using next-generation sequencing methods, they identified a wide range of vertebrates, including mammals, birds, reptiles, and amphibians.

“Our objective is to show that the strategy works, and that it is complementary to, and in some respects better than, existing techniques,” Siddall says. “[But] this is really going to have to be something that conservation organizations or forestry organizations in various countries decide that they want to do.”