In 1989, marine biologist Brigitta van Tussenbroek arrived at National Auto­nomous University of Mexico in Puerto Morelos, a small village on the Caribbean coast about a 20-minute drive south of the resort city of Cancun. Those were austere days for the researcher. She spearfished for her dinners on the coral reef a short swim from her laboratory. Once, she drove across the Yucatan peninsula to the city of Merida to buy a coffee maker, but the water quality back in Puerto Morelos was so bad that the coffee came out like sludge. Research was a challenge, too—the lab’s air conditioning didn’t work and the microscopes would become full of mold. With no internet or phones onsite, “the only connection for us to the outer world was a radio station in Mexico City,” she recalls fondly.

Over the years, Puerto Morelos and its community began to modernize. The resorts came in, as did telephone service to the lab. Roads divided the mangroves, scattering the crocodiles, and tourism thrived. What was once a tiny, isolated village is now part of a strip of coastline that brings in millions of tourists, and billions of dollars, annually. But ecological events far out in the Atlantic threaten to uproot what this new economy has grown.

Van Tussenbroek first began to notice more sargassum accumulating on the beach outside her lab in 2012. A type of olive-green, frilly macroalga bearing air sacks the size of BB shot, sargassum (class Phaeophyceae) had always been a part of the beach scenery, but in small enough amounts that no one paid it much mind. Jim Gower, a scientist at Fisheries and Oceans Canada who was watching marine life from space, had taken note of the seaweed’s increased presence a year earlier. He had developed an algorithm that could spot plankton blooms by picking out a particular spectral signature in satellite images. It turned out to be quite good at identifying sargassum. In 2011, “we suddenly saw this shift,” Gower says. 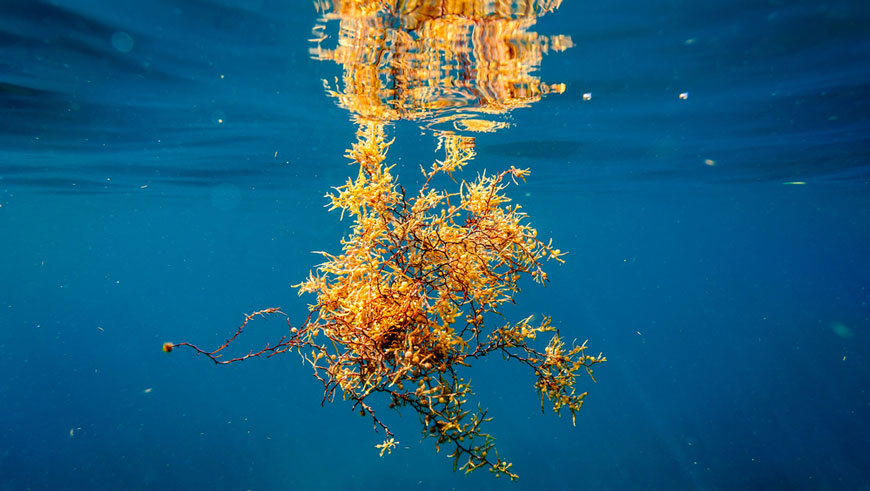 Ordinarily, sargassum follows an annual cycle of emerging from the Gulf of Mexico and flowing into the Gulf Stream, then forming vast mats on the surface of the body of water named after it, the Sargasso Sea in the North Atlantic.

But in 2011, the satellite data showed the sargassum population stretching down into the Caribbean, then clear across the ocean to West Africa. “It was very odd and very interesting,” says Gower. “Since nobody had been studying it from space before, we didn’t know if it was something that happened regularly.” He called colleagues in Africa and in the Caribbean, who agreed that this was indeed an odd occurrence. That year, they said, it had begun piling up along the beaches.

Boats in the Atlantic were tracking the same trends. Amy Siuda, a biological oceanographer at Eckerd College in Florida, has been sailing on research cruises up and down the Atlantic for two decades with the Sea Education Association (SEA). In 2011, SEA recorded a spike in sargassum in the Caribbean. “We weren’t quite sure what was going on,” she says. “That was the very beginning of things.”

Van Tussenbroek says she didn’t think much of the accumulating sargassum when she first noticed it, but by 2015, she became alarmed as huge masses piled up along the Caribbean shore. She set out to measure how much light reached the seafloor, the nutrient composition of the seagrass, the density of seagrass meadows, and other environmental metrics to see what these weedy inundations might mean for the reef and the benthic vegetation. A lot of damage, it turned out.

We weren’t quite sure what was going on. That was the very beginning of things.

The sargassum mats near shore had prevented light from reaching the seabed, created anoxic conditions, and leached nutrients (Mar Pollut Bull, 122:272–81, 2017). The seagrass meadows had changed composition, too, from being dominated by a species that stabilized the sediment with its robust rhizome network to a type of grass that allowed for greater erosion. Water quality appeared to be negatively affected as well, and stony corals were dying off at higher rates than normal. “This really does affect coastal ecosystems,” van Tussenbroek says.

Based on the satellite data, researchers suspected that these sargassum blooms, which have made regular appearances in the Caribbean with greater and greater abundance since 2011, weren’t coming from the Sargasso Sea. Evidence on the ground backed up their hunch. In 2015, most of the seaweed washing ashore was an uncommon form of Sargassum natans with the nondescript name of morphotype 8. Siuda has since found that the small cnidarians known as hydroids that live on this particular sargassum are genetically distinct from hydroids living on the more common species S. fluitans, supporting the idea that the two populations of seaweed have different origins. “Natans 8 has likely been sitting in [the] equatorial Atlantic in low concentrations for decades,” says Siuda. “Something is causing it to bloom, and currents are bringing it to the Caribbean.”

That something, scientists have proposed, could be nutrient discharge from rivers in the Amazon basin. The hypothesis is in line with what Brian Lapointe, who studies algal blooms at Florida Atlantic University, discovered years ago: that nutrients from coastal runoff and river discharge in the Gulf Stream and Gulf of Mexico fuel the growth of sargassum there (Limnol Oceanogr, 40:625–33, 1995). “You get increasing flow in the spring and summer in the Amazon,” says Lapointe. “With deforestation and agriculture, the runoff and nitrogen could be changing and increasing and providing a nutrient supply to feed that growing bloom.” Confirming the cause of the seaweed inundations will be critical to stemming the algae’s growth—if in fact the problem can be mitigated.

Lapointe and his colleagues reported earlier this month in Science that 2018 marked the largest seaweed bloom ever recorded—a mat of sargassum that stretched 8,850 kilometers across the Atlantic ocean and contained more than 20 million tons of the seaweed (365:85–87). 2019 looks like it won’t be too different.

Coastal communities are grappling with how to remove it from beaches and nearshore waters to preserve the integrity of the habitat—and the tourism industry the ecosystem drives. During the winter and spring, front loaders have been filling up trucks to haul away rotting sargassum from resort beaches. And van Tussenbroek has been advising efforts to collect the seaweed offshore before it can foul the coast.

The endeavor poses its own environmental hazards, as decomposing seaweed emits noxious gases, and governments lack the funds to properly dispose of it. Siuda points out that sargassum mats are their own ecosystems, complete with complex food webs that include hydroids, bryozoans, shrimps, crabs, nudibranchs, and fish. When the mats are collected and thrown ashore, those communities are destroyed. And in the end, scooping away sargassum from the coastline doesn’t get to the root problem of the inundation—one van Tussenbroek sees as now an unfortunate but permanent fixture of Caribbean life.