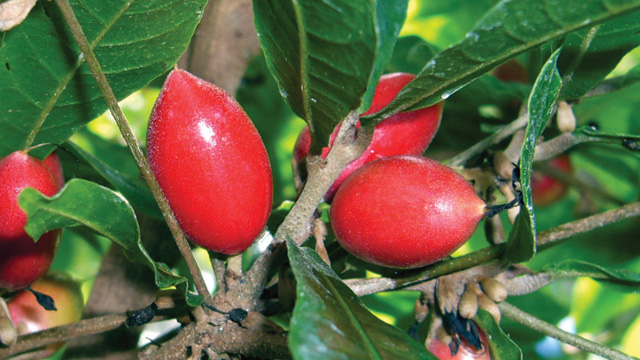 Imagine sucking on a lemon that tastes as sweet as honey, or munching on what you think is a crunchy candy only to discover it’s a pickled onion. Such is the taste-bud trickery experienced at so-called flavor-tripping parties. The secret to the flavorful deceptions is a small red berry from West Africa called miracle fruit, which itself has very little flavor, but can make sour or acidic foods taste extremely sweet when eaten soon after the berry contacts the tongue. So bizarre is the fruit’s effect that just one taste was enough to convince Japanese food scientist Keiko Abe, of the University of Tokyo, to launch into an entirely new area of study.

In the early 1980s, Abe was researching oryzacystatin, the first recognized plant protease inhibitor, which she had identified and cloned from...

"Eating the fruits, I was surprised and excited,” says Abe. “The sourness [of the lemons] disappeared.”

“It made me change my interest from protease inhibitor biochemistry to taste science,” she adds. “Since then, I have been working on taste chemical biology.” Abe focused specifically on miraculin, the protein in miracle fruit responsible for its flavor-transforming powers.

More than twenty years after her first taste of the berries, Abe has finally exposed miraculin’s trick. “At long last, my group succeeded in unveiling the molecular mechanism that makes miraculin a miracle,” she says. Previous studies had shown that inhibitors of the human sweet taste receptor could diminish miraculin’s effect, but there was no formal proof that the protein and the receptors interacted. Furthermore, a mere ability to bind the receptor wouldn’t explain why miraculin didn’t taste sweet on its own but rather made acidic compounds taste sweet.

Abe and her team expressed the sweet taste receptor in cultured human cells and then observed miraculin’s function using fluorescence to measure intracellular calcium concentrations, which increase when the receptor is active. At neutral pH in miraculin’s presence, calcium levels inside the cells remained low. At acidic pH, however, the cells fluoresced brightly.

Although miraculin didn’t activate the receptors at neutral pH, it was still bound and could inhibit their activation by other sweeteners. “So the miraculin has been sitting there, it’s ready to go, but it is not actually turning the key to turn on the sweet taste receptor, and therefore you’re not getting a perception of taste,” says Steven Munger, a chemosensory neurobiologist from the University of Maryland School of Medicine. “Adding the acid changes the shape of the miraculin, and that in turn changes the shape of the receptor, which turns it on.”

Using their in vitro model, Abe’s team also determined the precise part of the receptor with which miraculin interacts. They now plan to determine the X-ray crystallographic structure of that interaction. They also hope to use miraculin to answer further questions about sweet taste receptor biology. As taste biologist Paul Breslin of Philadelphia’s Monell Chemical Senses Center and Rutgers University points out: “It is very hard to study sucrose in an in vitro system because it is sweet at such a high concentration relative to things like miraculin . . . and those high concentrations tend to osmotically muck everything up.”

“The sweet taste receptor-binding ability of miraculin is stronger than that of any other sweetener known,” says Abe. Besides being an interesting phenomenon, this strong binding makes miraculin a “calorically negligible” sweetener says Munger. Consequently, Abe says, “We are interested in a large-scale production of miraculin . . . because developing sweeteners for antidiabetes and antiobesity uses is of pressing importance.”

Besides the need to solve the logistics of cost-efficient, large-scale production, some modifications might need to be made to miraculin before it is used as a food additive. “The sweetness is very long-lasting,” explains Munger. In fact, it can last up to a couple of hours.

Munger has first-hand experience with this problem of sustained receptor binding. “The first time I ever tried it was at a smell and taste meeting in Japan . . .but unfortunately, the session was followed by a social hour where there was beer.” There is enough acid in beer to trigger the miraculin, Munger explains. “It tasted very wrong.”