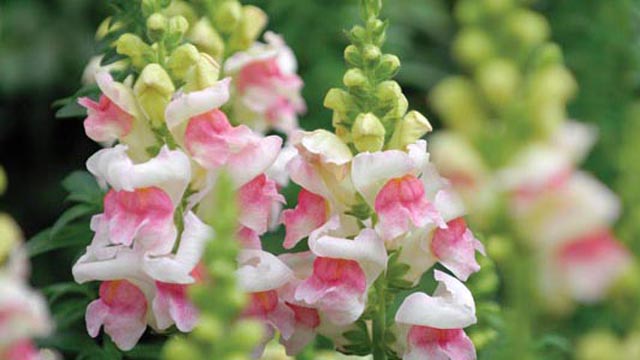 Floral bouquets are the most ephemeral of presents. The puzzle of how flowers get their shape, however, is more enduring. It’s a question that has kept Enrico Coen, a plant biologist at the John Innes Centre in the United Kingdom, busy for more than twenty years. Now he thinks he may finally have a handle on the answer, thanks to a clever combination of detailed image analysis and computer modeling—an approach typically applied to engineering problems.

Although there have been sustained efforts to identify genes involved in organ growth and shape in Drosophila, how genetics translate into the final shape of a wing, for example, is largely unknown. Coen and his colleagues used the flowers of Antirrhinum majus—better known as the snapdragon—to build a computational framework that would allow them to make experimentally testable predictions about shape generation (PLoS Biol, 8:e1000537,...

Coen says that they asked a “very vague” question at the start of the project: “What would you need to do to grow from a simple starting shape to produce a final snapdragon flower?” He likens the problem to making the individual squares of a chessboard grow at different rates and in different directions: each square affects its neighbors, leading to puckering and rotation, all of which have to be modeled simultaneously. Engineers and physicists use a method called finite-element analysis for similar experiments, such as modeling how motor vehicles will deform in the event of a crash. But developing an analogous biological framework wasn’t trivial and hadn’t been done before, because, as Coen says, “most things in the world of physics don’t grow.”

What would you need to do to grow from a simple starting shape to produce a final snapdragon flower?
—Enrico Coen

Coen and his team first modeled genes controlling different growth rates in different parts of the flower. “Most people would assume that’s what genes do,” says Coen. But they soon ran into problems. “It wasn’t easy to get a good snapdragon out of it,” he says, as the model led to swelling in the tubular part of the flower that they couldn’t correct. So they tried a new model in which genes also controlled the orientation of growth.

Video: Two different approaches by the Coen Lab for modeling the growth of Snapdragon flowers.

Cells have different molecules at each end, which give them polarity. “It’s not obvious,” Coen says, “but there’s a little arrow in every cell.” So in a tissue, if you could see all these arrows it would look like a magnetic field. The researchers suspected that this field of orientations was controlled genetically, so they postulated the existence of tissue-polarity-organizing genes. Once they modeled these, they found that the computer could produce good-looking snapdragon flowers.

It took several years to get to that stage, though, as Coen and his team learned how to use the model and understand the results it gave them. Coen says that thinking of flower formation in terms of a two-dimensional, growing sheet was a new experience for them all. Groping their way around this “very peculiar world” was a slow process, but “extremely satisfying,” he says. Only after mastering this could they experiment with the positions and effects of polarity-organizing genes.

F1000 Member Jan Traas, at École Normale Supérieure de Lyon, calls Coen’s findings a “quantitative framework to describe gene function in terms of geometry.” The framework can be used to make predictions about the functions of genes thought to be involved in the generation of flower shape, which can then be tested by making mutants and examining their effects in real plants. Traas notes that these models were not possible 20 years ago, because the computer power was not available. Researchers at the Coen lab, in collaboration with the nearby Andrew Bangham lab, are developing finite-element methods for modeling the growth and development of curved, two-dimensional tissues such as leaves and petals. This example is exploring the development of wild-type snapdragon flowers (left) and various symmetrical mutants (middle and right).
COURTESY OF COEN LAB

Researchers at the Coen lab, in collaboration with the nearby Andrew Bangham lab, are developing finite-element methods for modeling the growth and development of curved, two-dimensional tissues such as leaves and petals. This example is exploring the development of wild-type snapdragon flowers (left) and various symmetrical mutants (middle and right).

Next, Coen wants to identify the molecular players behind the geometric organization he’s modeled, searching for genes and proteins in real flowers. He says that the genes involved are probably already described, but because the infrastructure to study their function didn’t exist before, other researchers hadn’t appreciated them for what they really were. “We’re looking through the literature and thinking, ‘Oh yes, that shows the right behavior: they just didn’t realize it.’” Coen and his colleagues are also extending the methodology to other tissues, including the leaf, before moving on to models of an entire plant.

The Hidden Jewel refers to an article evaluated in Faculty of 1000 that was published in a specialist journal. You can read evaluations of Coen’s article at http://bit.ly/FlowerShape.