ABOVE: COURTESY OF SANDEEP ESWARAPPA

Seven years ago, Sandeep Eswarappa flipped on the documentary television show Cosmos and was instantly engrossed in the episode’s topic: tardigrades. That the pinhead-size critters can endure extreme environments on Earth and in space was awesome enough. But it was the fact that these organisms, also called water bears, survived all five mass extinctions on Earth that caught Eswarappa’s attention, he tells The Scientist. “I decided then that when I came back to India to start my own lab, tardigrades would be one of my projects.”

At the time he saw the Cosmos episode, Eswarappa was a postdoctoral fellow in cell biology at the Cleveland Clinic studying cancer and other pathologies associated with the abnormal growth of blood vessels. About a year later, in 2015, he was tapped to launch his own group at the Indian Institute of Science in Bangalore, and he recruited graduate student Harikumar Suma to help him begin a tardigrade project. Intrigued, Suma and a few other students in the lab began combing the crevices of the institute’s campus for water bears to study and ultimately found some in the moss growing on a concrete wall.

Taking the moss back to the lab, Suma tapped it gently on the side of a Petri dish to dislodge and collect the tardigrades to study under the microscope. Like other tardigrades, they appeared as 600-micrometer-long, reddish-brown bearlike creatures with four pairs of legs that bore tiny, Y-shaped claws at the tips. When the researchers sequenced the tardigrades’ genomes, however, they found that the sequences didn’t match any species previously identified; this was an entirely new species belonging to the genus Paramacrobiotus. That led to a bit of a challenge cultivating the water bears in the lab because “we didn’t know what it feeds on, what temperature it needs to live . . . its life cycle,” Suma, now a project assistant at the Leibniz Institute for Natural Product Research and Infection Biology in Germany, tells The Scientist. “There was a lot of trial and error and a lot of tardigrades were lost in the process.” 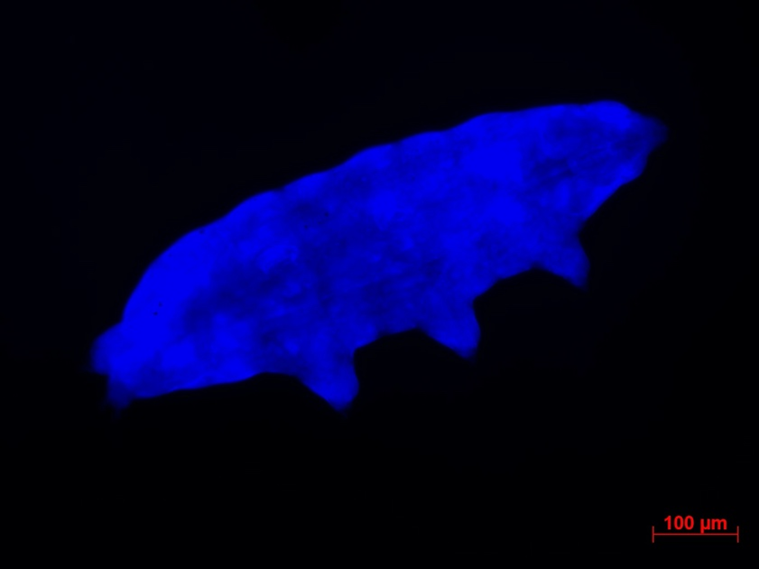 After a month, though, Suma found the sweet spot for growing the tardigrades and began to investigate their hardiness to various environmental stressors. He and Eswarappa were particularly curious about the critters’ resistance to ultraviolet (UV) radiation. Placed under a germicidal UV lamp for 15 minutes—an exposure that would kill most microorganisms—the tardigrades came out unscathed. Curious if they could confer the UV protection to C. elegans and another species of water bear, the researchers ground up the new tardigrade to create a paste with the mystery UV-resistance substance that they could slather on the other creatures. As they were doing this, they noticed that the paste fluoresced under UV light.

Other animals, such as comb jellies and corals, fluoresce too, and may do so as a shield against UV light, as fluorescent molecules absorb light at shorter wavelengths than they emit and prevent the harmful radiation from damaging animals’ cells. Suma and Eswarappa’s findings suggested that this could be true for the new species of water bear as well. Tardigrades that contained a higher concentration of fluorescent molecules bore the UV light exposure better than those with less. And, when the team bathed C. elegans and the non-UV-resistant tardigrade Hypsibius exemplaris in the extracted fluorescent molecules and exposed the animals to UV light, they survived. “It was like applying a sunscreen agent on the skin,” Eswarappa says.

With the results, Eswarappa and Suma join a growing cohort of scientists investigating tardigrades’ tolerance to extreme environments, says Nadja Møbjerg, a cell biologist at the University of Copenhagen and an expert in water bear research. “In recent years, the field has got great attention,” she says. “It’s actually an expanding field.”

Part of the attention may come from the popularization of tardigrade science by people such as Neil deGrasse Tyson on Cosmos and journalists’ stories in the media. James Kadonaga, a molecular biologist at the University of California, San Diego, actually fell into tardigrade research after reading an article on the animals in Chemical & Engineering News. The piece, published in 2016, explained Takuma Hashimoto’s work sequencing the complete genome of the most stress-tolerant tardigrade species of the time, Ramazzottius varieornatus. Based on the genetic analysis, the team identified a protein called Dsup, or Damage suppressor, that was responsible for making the tardigrade tolerant to X-rays and other stressors. When added to human cell cultures, the protein blocked X-ray and oxidation damage to the DNA.

Kadonaga, an expert on chromatin, was particularly interested by the article’s mention that Dsup colocalizes with nuclear DNA in tardigrades’ cells. He looked up the Dsup protein’s sequence in Hashimoto’s original paper and was surprised by what he saw. “It looked a bit like it was a chromatin protein,” Kadonaga tells The Scientist. With undergraduate Carolina Chavez, Kadonaga found that Dsup binds to nucleosomes, structures made up of roughly two turns of DNA wrapped around a set of eight histone proteins. Dsup may form a sort of “protective cloud” of protein around the chromatin and safeguard DNA from the hydroxyl radicals created when X-rays hit cells, Kadonaga explains. The team also showed that Dsup wasn’t the only protective protein in tardigrades’ arsenal; H. exemplaris has an ortholog that appears to work the same way.

Studies such as Kadonaga’s and Eswarappa’s could have practical applications, the researchers say. Dsup or other related proteins, for example, could be used to extend the life of cell lines created to manufacture proteins, or of T cells engineered to combat cancer. “You might be able to make cells that are tougher, more robust, that might last longer,” Kadonaga says. Tardigrades’ newly discovered fluorescent molecules, meanwhile, could be used in sunscreen or UV-repellant glasses, Eswarappa says.

A lot of water bear research also addresses fundamental research questions in fields such as evolutionary biology and genetics, Møbjerg says. Her path into the field was through her father, Reinhardt Kristensen, a world expert on tardigrades. Watching him study tardigrades, she became fascinated with them, and when she received tenure, she launched her research on the animal’s anatomy, phylogeny, and ability to tolerate warming air temperatures and changing levels of salinity in ocean waters. Working with tardigrades found in roof gutters around Copenhagen, she found that warming their waters in the lab made them “not feel so well.” They didn’t have their usual wriggle in their legs and body, she says.

That observation launched her team’s work on the animal’s response to climate change, a topic other teams have been working on too. Warmer temperatures could be the tardigrades’ “Achilles’ heel,” she says. “They tolerate warming temperatures less well than other extremes.”

Correction (January 20): The description of fluorescent molecules’ absorption patterns has been updated to state that these molecules absorb shorter, not higher wavelengths. Additionally, the length of the tardigrade is now correctly described as 600 micrometers, not 600 nanometers. The Scientist regrets the errors.