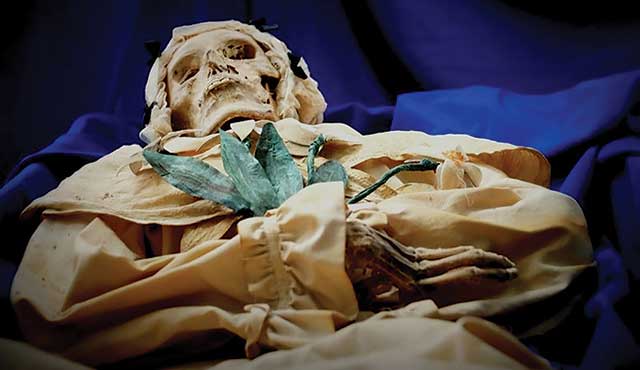 MUMMY DEAREST: The mummified remains of Terézia Hausmann, whose body was recovered from the Dominican Church in Vác, Hungary.HUNGARIAN NATURAL HISTORY MUSEUM

In the audience was Ildikó Pap, head of the anthropology department at the Hungarian Natural History Museum, who’d come to the conference to speak...

“They were like gold dust,” Donoghue says. “It was marvelous, because they were so well preserved.” Moreover, many of the remains were found with identifying information, death records, and even reports of symptoms they’d experienced before they’d died, some of which resembled those of TB infection.

After Donoghue and Spigelman’s talk, Pap approached the researchers to see if they might be interested in looking for evidence of M. tuberculosis in the Vác mummies. The duo eagerly accepted the offer, and Spigelman traveled with Pap back to Budapest to collect a few samples right then and there. Then in 1999, the researchers returned for a week-long sampling expedition to collect dozens more.

In addition to sampling the mummies, Donoghue decided to X-ray the chests of some of the centuries-old corpses. Doing so revealed that many had calcified lung lesions characteristic of TB infection. Initial PCR-based genetic screens of 168 of the bodies confirmed that TB was rampant: more than half tested positive for M. tuberculosis DNA (Am J Phys Anthropol, 120:144-52, 2003). Next, in collaboration with microbiologist Mark Pallen, then at the University of Birmingham, the researchers demonstrated that a straightforward metagenomics approach, with no targeted amplification, was able to generate M. tuberculosis sequences from a lung sample of a Vác female who had died in 1797 (N Engl J Med, 369:289-90, 2013). “We were very surprised that the very first sample we looked at we got very good coverage of the TB genome,” says Pallen, now at the University of Warwick Medical School.

Encouraged by their success, Pallen and his colleagues obtained a couple dozen more samples from Donoghue, and this time “got even better results,” Pallen says. In April, the team published 14 complete M. tuberculosis genomes, representing 12 distinct genotypes, from eight of the Vác mummies (Nat Commun, 6:6717, 2015). All the bacterial strains belonged to M. tuberculosis lineage 4, also known as the Euro-American lineage because it is prevalent in Europe and the Americas, though it is also found across Africa and the Middle East. Comparing the sequences to modern M. tuberculosis lineage 4 genomes, the researchers calculated an average mutation rate and, based on that, dated the last common ancestor for the lineage to the late Roman period, somewhere around the year 450 CE. The mutation rate they calculated was consistent with a common ancestor of all M. tuberculosis lineages less than 6,000 years ago—a date that has been a point of contention in the TB field in recent years.

In October 2014, microbiologist Sebastien Gagneux of the Swiss Tropical and Public Health Institute and colleagues published Mycobacterium genome sequences, recovered from 1,000-year-old Peruvian human skeletons, that also pointed to a date for the most recent common ancestor of the M. tuberculosis complex of fewer than 6,000 years ago (Nature, 514:494-97, 2014). But just a year earlier, Gagneux and his colleagues had used a population genomics approach on the genomes of 259 modern M. tuberculosis strains to estimate the most recent common ancestor to be a whopping 70,000 years old (Nature Genetics, 45:1176-82, 2013).

“The estimate of [the common ancestor of] the TB complex varies between 70,000 years and 6,000, so there’s a big difference,” says Thierry Wirth, an evolutionary microbiologist with the Institut de Systématique, Évolution, Biodiversité and the École Pratique des Hautes Études in Paris. “I tend to think it’s rather closer to 70,000 years old,” he added.

The discrepancy may result from the fact that mutation rate is not constant through time. Pallen’s new study and Gagneux’s analysis of the Peruvian samples calculated a mutation rate based on relatively recent samples, and may yield an inflated rate, as slightly deleterious mutations have not yet been purged from the genome, Wirth says. “This will have the consequence that the full clade will look very recent.” Longer term, he says, that rate is likely to drop off. If the mutation rate is calculated with older samples, he suspects it would reflect a slower rate that may jibe with the more ancient common ancestor of the M. tuberculosis complex.

“The deeper in time you go back, the more the rates slow,” agrees evolutionary population genomicist Caitlin Pepperell of the University of Wisconsin–Madison. But she doesn’t think it would slow so much as to push back the date of the common ancestor by more than tenfold. “Most people would agree that the most robust estimates of evolutionary rates come when you calibrate your rate inference with an ancient specimen,” she says. “There are no ancient-DNA studies that support the 70,000-year time scale.”

“Everybody agrees—it’s been shown in different organisms—that substitution rate should decay as you go further back in time, but we have just no idea [what] this decay actually looks like in M. tuberculosis,” says Gagneux. “So I think there’s still a lot of work to be done to try to incorporate these uncertainties in a better way.”