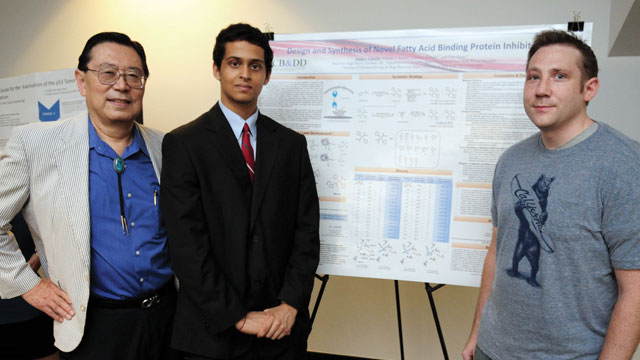 WHIZ KID: Raghav Tripathi (center), who won a $10,000 scholarship at the 2012 Siemens Competition National Finals, with his mentor Stony Brook University professor Iwao Ojima (left), and PhD candidate William Berger, who assisted him with his project.COURTESY OF STONY BROOK UNIVERSITYRaghav Tripathi is a senior at Westview High School in Portland, Oregon, but he’s already a promising scientist. When the 17-year-old’s mother broke her leg in a skiing accident and refused to take painkillers for fear of becoming dependent, Tripathi began looking into the possibility of producing a nonaddictive alternative. He read about anandamide (AEA), a compound naturally released by the body to ease pain and inflammation. “I thought I could find some way to increase concentrations of this molecule,” he says.

A literature search led him to biochemists at Stony Brook University, New York, who were already doing similar research, so he e-mailed his resume...

The research Tripathi carried out that summer earned him a place in the finals of the Siemens Competition in Math, Science, and Technology, held in Washington, DC, where he was awarded 6th place and $10,000 toward his college tuition. But it also provided an early taste of the laborious process of drug discovery and helped push his idea for a nonaddictive painkiller a step closer to reality. “It was an amazing experience,” says Tripathi. “I was able to do research, work with people who inspired me to continue as a scientist, and learn just how much work it takes to create a new drug.”

Ojima’s team had identified two fatty acid binding proteins (FABP) that act as intracellular transporters of AEA, an endocannabinoid recently shown to relieve pain and ameliorate the effects of drug withdrawal in mice. Analgesic effects occur when AEA binds to the outside of cells, explains Tripathi, but FABPs drag AEA molecules into cells and break them down. So the plan was to find molecules that inhibit FABPs and thus increase endogenous concentrations of AEA molecules.

“Using the computer at the lab, we screened around a million compounds to see which one binds the best to the FABPs,” says Tripathi. After testing the 48 most promising compounds in vitro, they identified the compound with the greatest FABP inhibition—γ-truxillic acid 1-naphthyl ester—and synthesized a novel version. When assayed against HeLa cells, their truxillic acid derivative (known as SB-FI-26) significantly inhibited the cellular uptake of AEA. “We showed that it was doing what we wanted it do inside cells,” says Tripathi.

The team later found that SB-FI-26 acted as a potent painkiller with mild anti-inflammatory activity in mice, a result that supports the idea that the inhibition of FABPs and subsequent elevation of AEA is a promising new target for drug discovery. The research was published in December 2012 in PLOS ONE (7: e50968).

It was a collaborative, multidisciplinary effort, but Ojima was full of praise for Tripathi’s contribution. “It’s graduate-level [research], so it’s a tremendous challenge for a high school kid. But Raghav is very persistent and intelligent, and he worked well with everyone.”

Tripathi is now back at school in Portland—where he serves as president of the Pre-Medical Association and captain of the debate team—but the Stony Brook researchers keep him abreast of their progress. They are currently in the process of modifying their novel molecule to achieve optimal potency and metabolic stability, because the rate at which the compound is metabolized is crucial to its efficacy. “We’re fine-tuning to make sure [the molecule] has the most desirable pharmacological properties,” says Ojima. “We’re hopeful that we can get it through the preclinical stage and then test it in humans.”

If all goes according to plan, the research will result in a pill to relieve chronic and acute pain without addictive side effects, says Tripathi, which could help to solve the growing problem of painkiller dependency and misuse in the U.S. and elsewhere. “Hopefully this molecule gets out to the public at a good price,” he adds.

As for Tripathi himself, the experience has made him even more determined to go into research. “I wanted to be a physician-scientist before, and my time at Stony Brook confirmed that,” he says. “I want to study neuroscience, though I don’t know where yet. Then it will be graduate school, or maybe medical school, and then into research.”

Having mentored scores of graduate students during his career, Ojima is confident that Tripathi has all the qualities to become a successful scientist. “Sometimes the most exceptional young students are kind of weird, so they don’t get along with seniors and colleagues, but he has a very nice personality as well. He is a very independent researcher and thinker, but he can collaborate with others. Whatever field he chooses, I’m quite sure Raghav will be a leader.”