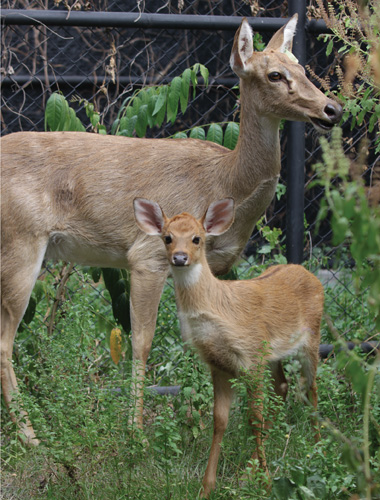 On October 17, 2011, a fawn was born at the Khao Kheow Open Zoo in Thailand. It wasn’t just any fawn; it was an Eld’s deer, considered endangered by the International Union for Conservation of Nature. Fewer than 1,500 of the graceful, brown animals remain in the wild, their historic numbers reduced by habitat loss and hunting. But the fawn born last fall wasn’t just any Eld’s deer; it was created by researchers who collected eggs, inseminated them in vitro after thawing frozen semen, and transferred the embryos to a surrogate mother.

“I was really excited,” says Pierre Comizzoli, a reproductive physiologist at the Smithsonian Conservation Biology Institute, who oversaw the Eld’s deer project. “[It was] the first test-tube fawn...

Unfortunately, not enough is known about the reproductive physiology of most endangered species to routinely apply in vitro fertilization techniques, Comizzoli says, and the Eld’s deer success is more the exception than the rule. “Right now, we are still trying to develop techniques,” agrees Barbara Durrant, director of reproductive physiology at the San Diego Zoo Institute for Conservation Research. “This is not something that’s done routinely yet for exotic species.”

But Comizzoli and his team are working to fix that, using the domestic cat as a model. It’s a good species to study, he says, because of the nearly endless supply of ovaries and testes from local spay-and-neuter clinics. “It’s a huge amount of biological material that we have access to, and for us it’s fantastic.” At the same time, he and others are saving sperm and egg cells from as many species as they can in the hopes that once they’ve perfected the techniques, they will have the gametes of genetically valuable individuals preserved and ready.

Comizzoli is also trying to find better ways to store the eggs and sperm in suspended animation. “Because it doesn’t really mean anything to do all those in vitro techniques without having, in parallel, the possibility of storing the sperm or eggs or even embryos.” In his collection at the National Zoo in Washington, DC, Comizzoli has sperm specimens from almost 100 different species, as well as eggs gathered from about 25 species. And the collection is growing, he says. If the zoo veterinarians decide they need to anesthetize an animal for a clinical exam, for example, Comizzoli is often there, collecting gametes to freeze and store in his collection. And “whenever we have a female dying here at the zoo, we take the ovary and freeze it, or testicular tissue from the males,” he adds.

Other efforts around the globe parallel Comizzoli’s. The San Diego Zoo’s collection—one of the biggest in the world—boasts thousands of sperm and egg samples from about 300 different species, Durrant says, and “we add to the collection almost on a daily basis.”

But Comizzoli is also exploring methods that don’t involve freezing. Liquid nitrogen is expensive, he notes, and tanks have to be continually topped off as the nitrogen evaporates. So he’s teamed up with bioengineer Gloria Elliott at the University of North Carolina, Charlotte, to see if they can “preserve viability not by freezing the cell, but by drying the cell,” he says. Using technology similar to your kitchen microwave, the researchers hope to remove most of the water from cells to pause any biological activity so the cells can be refrigerated or stored at room temperature and then reactivated by rehydration, much as a seed survives in a dormant state until it is watered and germinates.

But drying cells is not without hurdles of its own. To avoid damaging cell contents, it’s important not to remove the water molecules that are integral to the structure of cellular biomolecules such as proteins and DNA. To protect the cell, Elliott uses sugars that bind the cell’s water and form a sort of glass. “You remove some of the water and create a solid solution so viscous that molecules can’t diffuse in that matrix, and that suspends the animation,” she explains. Besides shielding the structure of key molecules, such sugars help cells survive the drying process by stabilizing cell membranes and protecting against osmotic damage.

To avoid overheating gametes as they dry out, Elliott must cycle the microwave’s power on and off, applying enough energy to cause evaporation, but not so much that cells are damaged or killed. It’s a balancing act, she says—one she is still working to perfect. But the technique has the potential to be a lot more field-friendly than freezing. “If you can envision something where you can dehydrate the tissue and dry pack it, just like you would food rations or things along those lines, you can see the obvious benefit in the field for gamete collection and fieldwork in general,” she says.