Some viruses, possibly even SARS-CoV-2, can sneak into the brain through the nose. Recent studies show that microglia are ready for them when they do.

Failure to smell fresh cut grass or a poo-laden diaper is, at least these days, a potential sign of COVID-19 infection. “People say things smell funny or they can’t smell at all,” says Harvard University neurobiologist Sandeep Datta. Reading about people’s experiences of anosmia, Datta wondered how SARS-CoV-2, the virus that causes COVID-19, might be having this effect. One possibility was that the virus attacks cells that line and support olfactory neurons in the nose. Alternatively, SARS-CoV-2 could be directly targeting the neurons themselves.

Datta’s and other researchers’ work—which so far includes genetic and cellular analyses in humans, rodents, and monkeys—suggests that mammalian olfactory neurons don’t have the right cell receptors for the virus to get inside them, meaning that the lack of smell most likely comes from the infection of olfactory support cells. But not everyone is convinced by the data; some researchers continue to argue that SARS-CoV-2 can infect neurons in the nose and ultimately invade the brain this way.

Microglia were gobbling up bits of the virus from infected neurons in the olfactory bulb.

If the virus were able to enter olfactory neurons, it’s in theory a “very short route,” along a single neuron, from nose to brain, notes pathologist Debby van Riel of Erasmus Medical Center in the Netherlands. Van Riel, who began studying influenza’s ability to attack nerve fibers involved in olfaction decades ago, says she’s not convinced SARS-CoV-2 can infect olfactory neurons. But the discussion has reminded scientists how little they know about viral invasion through the nose. That’s why, she says, she was fascinated to read about recent experiments by Duke University immunologist Ashley Moseman and colleagues that tracked immune responses in mice that had had vesicular stomatitis virus (VSV) squirted up their noses.

VSV is known to infect olfactory neurons in mice. The team was interested in what Moseman calls a “sneaky front door” for this virus to travel via nerve fibers that project from the nasal cavity and connect with neurons deeper in the brain. Mice that get the virus don’t die from the infection, even if it enters the brain, and they don’t suffer significant brain damage, either. Interested in how the mice avoided this damage,  Moseman and his colleagues decided to tag VSV particles with fluorescent markers, then inject them into the mice’s noses to see if the team could uncover how the immune system responded to the infection.

The fluorescent imaging showed that VSV was infecting neuronal fibers in the nose and also neurons farther up in the olfactory bulb leading to the brain. “VSV gets into neurons in the nose and actually kills those neurons,” says study coauthor Dorian McGavern, a viral immunologist at the National Institute of Neurological Disorders and Stroke. “But those neurons can grow back. They can replenish the system and restore sense of smell.” Neurons farther up in the brain can’t be regenerated, yet, oddly, they didn’t appear to die after infection. 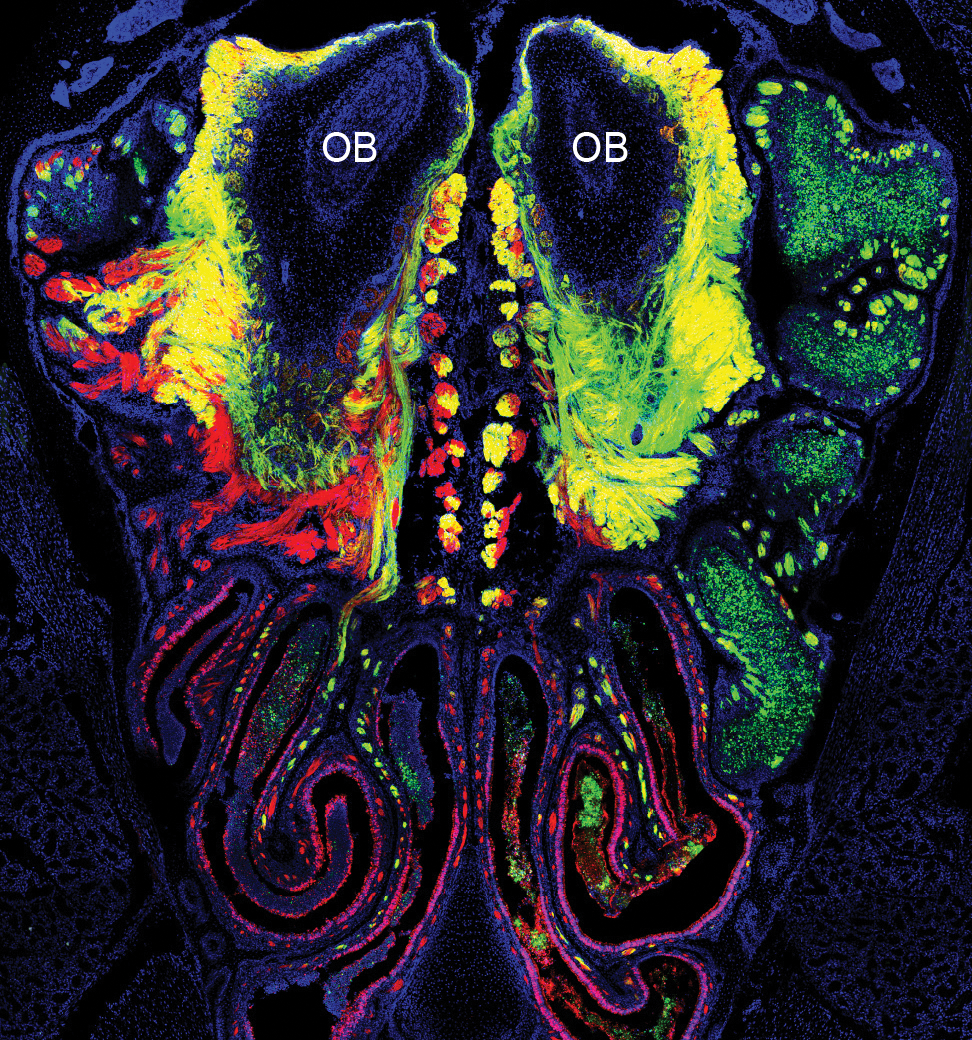 NEURONAL ROUTE: Six days after infection, virus (green) appears in nerve fibers that project into the olfactory bulb (OB) of mice, meaning the virus has spread from the nose into the brain.
SCI IMMUNOL, 5:EABB1817, 2020

Probing further, Moseman, McGavern, and their colleagues revealed how those neurons that sat deeper in the brain were spared. Microglia, the primary immune cells of the brain, were gobbling up bits of the virus from infected neurons in the olfactory bulb. Although not getting infected themselves, the microglia were projecting those viral bits, like flags, on their cell surfaces, attracting killer T cells in the blood to come to the brain and mount an immune defense against the microglia, rather than against the infected neurons, which also display viral bits on their surfaces. The interaction between the microglia and the killer T cells led the T cells to release cytokines that triggered the elimination of the virus from infected neurons without killing those neurons in the process, the team found. “Microglia are playing an absolutely critical role here in protecting neurons within the brain,” McGavern says.

What’s not yet clear is if the killer T cells do, in fact, kill the virus-flaunting
microglia or whether the two types of immune cells interact in some other way to spur T cells to release the virus-eradicating cytokines. “It’s possible that microglia sort of take that hit on behalf of everybody,” Moseman says, “and in doing so T cells avoid going to try to engage with neurons, which don’t replenish themselves very well.” Microglia are replaceable, he speculates, so losing them might be less consequential than the irreversible damage of neuronal death.

The work offers a glimpse at how the body and brain respond to invasion of viruses such as VSV through the nose, van Riel says. “If you know the way the body can handle an infection without causing severe [brain] damage, it could lead to new insights, which could lead to therapeutic strategies.” However, scientists still don’t yet have a good grasp of which viruses can enter the central nervous system this way. That may change as more researchers investigate whether or not SARS-CoV-2 can. The work might even suggest that each and every virus elicits a unique immune response in the brain, van Riel notes. “I think we’re only seeing the tip of the iceberg.”