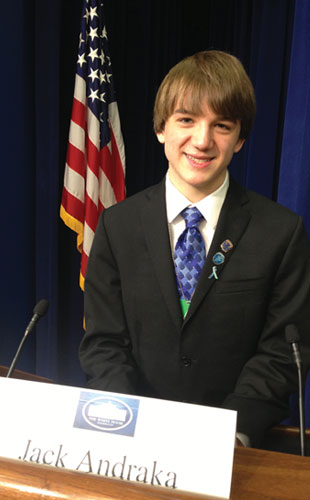 WHIZ KID: Jack Andraka’s tireless work in the Johns Hopkins University lab of pathologist Anirban Maitra paid off in the form of a $75,000 scholarship.
courtesy of jack andraka

In the spring of 2011, 15-year-old Jack Andraka had a lot on his mind. A close friend of the family, a man who was like an uncle to Andraka, had recently died of pancreatic cancer. Reading up on the disease, the then high school freshman discovered that around 85 percent of pancreatic cancers are diagnosed too late, when patients have less than a 2 percent chance of survival. The reason, Andraka learned, was that the best tools for early detection are both expensive and woefully inaccurate.

“I was like, ‘There has to be a better way than this really crappy test,’” says Andraka, currently a sophomore at North County High School in Glen Burnie, Maryland.

Then, while learning about antibodies in biology class, Andraka was struck with an idea. “I thought maybe if I lace mesothelin-specific antibodies into a network of carbon nanotobes I would have a network that reacts only to mesothelin [in a blood sample] and would change its electrical properties based on the amount present.” As the mesothelin proteins attach to the antibodies, the gaps between nanotubes widen, weakening the network’s conductivity—a signal detectable with a simple ohmmeter.

Andraka wrote up a detailed research proposal and e-mailed it to scientists at Johns Hopkins University (JHU) and the National Institutes of Health. He received a raft of rejections—and one maybe, from Anirban Maitra, a pathologist at JHU. “It was remarkable because he sent a very specific, 30-page protocol including reagents and pitfalls and everything,” says Maitra, who, after meeting (and grilling) Andraka, invited the teenager to work in his lab.

Almost every day for the next 7 months Andraka’s mom picked him up after school and drove him to JHU, where he often worked long into the evening. It was a steep learning curve, and there were tearful moments—not least when a month’s worth of cell-culture samples exploded in a centrifuge. But by January 2012 Andraka’s dedication was beginning to pay off. In a series of pilot studies, he demonstrated that his dip-coated filter paper test strips—hooked up via electrodes to a $50 ohmmeter from Home Depot—were capable of measuring mesothelin levels in the blood of transgenic mice with human pancreatic tumors, and in a limited number of human serum samples. 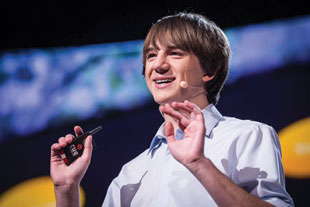 COURTESY OF JACK ANDRAKA“It’s important to note that this is still very much at a preliminary stage,” says Maitra. “We have to do a larger series of patient samples, and we have to prove that in human serum, where you have low levels of mesothelin in early-stage patients, you can still detect it.” Andraka is not the first to coat carbon nanotubes with antibodies. In fact, researchers have already developed similar tests for breast and prostate cancer. But Andraka’s is the first attempt to use the method to diagnose early-stage pancreatic cancer—and, if all goes according to plan, he could be the first to demonstrate that the approach is sensitive enough for such purposes.

Nevertheless, Maitra says, “it’s extremely impressive for a 15-year-old kid to come up with such a cogent idea and then to work through it in the lab with such dedication. He’s a very bright kid, but he had to work hard, and he never gave up.” Maitra also notes that this was all Andraka’s own work. “I gave him a corner of my lab, with a postdoc to supervise him—because he’s a kid, so that’s required by law—but he truly did everything on his own. This is not someone else’s project that he piggybacked on.”

Andraka’s work won him the grand prize at the 2012 Intel International Science and Engineering Fair in Pittsburgh, which comes with $75,000 in scholarships. “It was a dream come true,” says Andraka, who was cast into the national spotlight with a subsequent appearance on ABC World News Tonight. He has since delivered six TED talks, sat on a panel of luminaries at the 2012 Clinton Global Initiative annual meeting, and attended the recent State of the Union Address as a guest of President Obama. Andraka seems to be taking his newfound fame in stride. “It can be overwhelming at times, but I’m enjoying it,” he says. “I have to balance it with being a normal high school student.”

For now, Andraka will continue to do just that. But Maitra says he’s sure his young protégé will achieve great things. “He’s a remarkable kid,” Maitra says. “Whatever he goes into, he will excel, but hopefully we can keep him in biomedical science.”