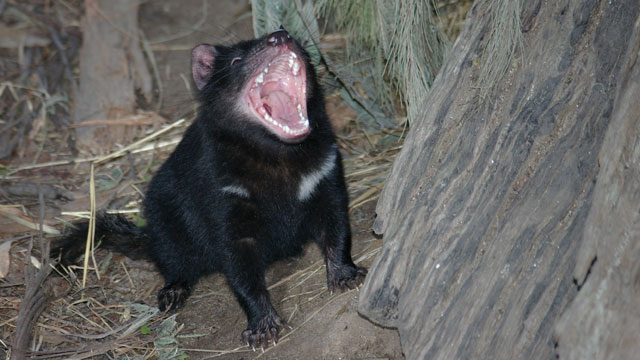 REBEL YELL: The Tasmanian devil is endangered because a fatal cancer has been ripping through populations for the past two decades. TERRY PINFOLD

One morning in 2009, 51-year-old Terry Pinfold left his home in Hobart, Tasmania, and headed north towards the coastal town of Burnie where he had always enjoyed teaching math and business to his Australian Technical College students. He had recently been offered a new job there by the Tasmanian Department of Education, which had assumed management of the school, but Pinfold’s mind was made up. He was going to the school to submit his letter of resignation, declining the offer and opting to pursue a PhD in cancer and immunology with the ultimate goal of saving the Tasmanian devil (Sarcophilus harrisii), a carnivorous marsupial with a notorious appetite for carrion. And he’s closing in on his goals.

As an avid bushwalker who would hand-rear...

In Hobart, Pinfold began formally studying the disease, known as devil facial tumor disease (DFTD), under immunologist Greg Woods of the Menzies Research Institute Tasmania at the University of Tasmania.

“At the time I was hand-raising these animals and releasing them into the wild, knowing they’d probably die a horrible death, so I just thought that if there was any way I could contribute towards some sort of cure or vaccine, that’s what I wanted to work on,” recalls Pinfold. “My main reason for doing the PhD wasn’t to complete the PhD, but to work on the DFTD problem.”

DFTD was first spotted and recorded in 1996 by a wildlife photographer, who also noted that the population had begun to dwindle. Then, in 2001, three sick devils trapped by University of Tasmania biologist Menna Jones were euthanized and biopsied, and the hunt was on. It took more than a decade to piece together genetic clues into a tentative whodunit: Patient Zero had most likely been a single female devil in northeast Tasmania who developed tumors in the well-innervated area surrounding her whiskers. The tumors appeared to have grown from mutated Schwann cells, neural support cells that surround and insulate nerve axons. From the devil’s face, the disfiguring tumors had spread to the rest of her body, making eating, eyesight, and basic organ function virtually impossible. DFTD proved fatal for that first victim, and over the next 18 years, the disease rampaged through the island, killing 100 percent of the devils it infected. Tumor cells in different devils all appear to be clones of the same mutant cell line, making DFTD one of only two cancers passed directly from animal to animal.

“I look at it as a series of unfortunate events all happening together, just like an accident in nature,” explains Woods. “Devils bite each other on the face in their social interactions, and the face is where those peripheral nerves like to grow. So these free tumor cells can come off and be transmitted in the saliva or get attached to the teeth. . . . It’s a perfect vehicle for transferring the tumor cells.”

I look at it as a series of unfortunate events all happening together.—Greg Woods,
Men­zies Research Institute Tasmania

As the Australian government poured resources into projects that sought to trap and establish healthy insurance populations to secure the species’ survival, Woods’s team instead set to work unraveling the mysterious nature of the disease. “We asked, how are DFTD cells evading [the animal’s] immune system, and is there something unique about these tumor cells that makes them invisible to all immune systems?” says Woods. “Ironically, my whole career I had studied how cancers escape the immune system, and it turns out we had a perfect system right in our backyard.”

Woods finally began getting answers to his questions with two major breakthroughs. This year, Woods, Pinfold, and Menzies colleagues Silvana Bettiol and Gabriella Brown successfully triggered an immune response to DFTD cells in mice (Front Immunol, 5:251, 2014). Demonstrating an immune response to the tumor cells proved that they weren’t entirely below the radar, providing the first glimmer of hope for a DFTD vaccine. 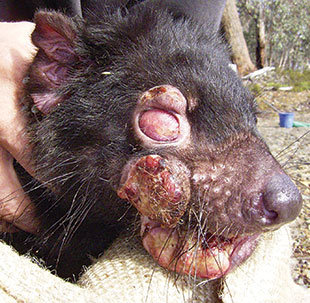 POOR DEVIL: Devil facial tumor disease (DFTD) spreads rapidly and kills 100 percent of the Tasmanian devils it strikes.THE SAVE THE TASMANIAN DEVIL PROGRAMThe team’s finding had arrived on the heels of another insight into the mechanics of DFTD that had long eluded Woods: Why, then, didn’t devils spontaneously mount an immune response? The Menzies team, in collaboration with researchers from Australia and Europe, had analyzed gene expression in lab-grown DFTD tumor cells and learned that the cells disguise themselves from the devil immune system by not presenting major histocompatibility complex (MHC) molecules on their cell surface (PNAS, 110:5103-08, 2013).

MHCs are essential policing molecules found in mammalian immune systems that identify diseased and foreign cells. Learning that the tumor cells evade detection by suppressing the expression of MHCs, the team finally understood how the disease became infectious.

“To me it was a changing moment,” Pinfold says. “Originally we thought that because the Tasmanian devil was restricted to one island and was so bottlenecked, the lack of genetic diversity was why the cells were transmitting. Now that we know that MHC is not expressed, that’s flipped the coin over for us in how we approach this problem.”

Already, Pinfold says, the team’s early work has shown they can temporarily turn on the MHC genes, returning the identifying molecules to the surface of the tumor cells, and they’re working on stimulating tumors to express the MHC molecules in mice. Their goal is to increase the duration of MHC expression long enough to generate an immune response that could generate lifelong immunity in devils.

Woods admits that more twists and turns may arise on the road to finding a DFTD vaccine, but the recent breakthroughs have rekindled hopes of saving the species as the clock winds down for the Tasmanian devil.

“The government’s large insurance population has reached its capacity and needs to be gradually reintroduced into the wild, so that would be our first target population,” says Woods. “But how far down the road we are . . . it’s hard to predict.”