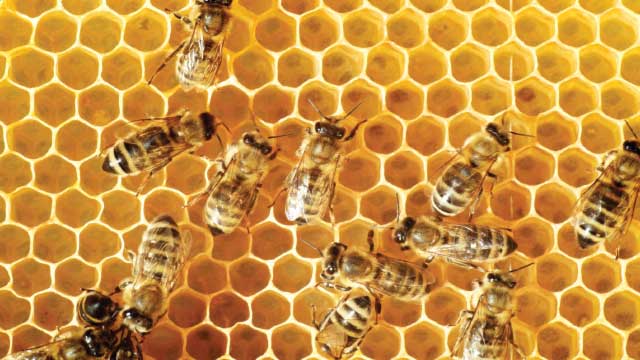 WAGGLING THROUGH THE AGES: Are seemingly innate behaviors, such as the dance honeybees perform to direct hivemates to pollen sources, the result of epigenetic mechanisms informed by ancestral learning?© ISTOCK.COM/VIKIF

A mother rat’s care for her pup reaches all the way into her offspring’s DNA. A young rat that gets licked and groomed a lot early on in life exhibits diminished responses to stress thanks to epigenetic changes in the hippocampus, a brain region that helps transform emotional information into memory. Specifically, maternal solicitude reduces DNA methylation and changes the structure of DNA-packaging proteins, triggering an uptick in the recycling of the neurotransmitter serotonin and the upregulation of the glucocorticoid receptor. These changes make the nurtured rat’s brain quicker to sense and tamp down the production of stress hormones in response to jarring experiences such as unexpected sound and light. That pup will likely grow into a calm adult,...

Caring for pups is one example of what casual observers of behavior might call an animal’s instinct—generally considered to be an innate, genetically encoded phenomenon. But could such epigenetic changes, when encoded as ancestral learning, also be at the root of maternal care and other seemingly instinctual behaviors we see across the animal kingdom?

“We don’t have a general theory for the mechanics of instinct as we do for learning, and this is something that has troubled me for a very long time,” says University of Illinois entomologist Gene Robinson. He studies social evolution in the Western honey bee and recently coauthored a perspective piece in Science together with neurobiologist Andrew Barron of Macquarie University in Sydney, Australia, suggesting methylation as a possible mechanism for the transgenerational transmission of instinctual behavior, rather than those behaviors being hardwired in the genome (356:26-27, 2017). Robinson and Barron suggest that instinctual traits, such as honey bees’ well-known waggle dance or a bird’s in-born ability to sing its species’ songs, are the result of traits first learned by their ancestors and inherited across generations by the process of methylation. This differs from classical thoughts on animal learning, which say that if a behavior is learned, it is not innate, and will not be inherited.

Researchers first discovered methylation in the mid-20th century, and scientists now understand the epigenetic mechanism to be a key mediator of gene regulation during development. What exactly spurs changes in methylation, however, is unclear. As researchers seek to better understand this process, some animal behaviorists see it as just the mechanism that could answer long-standing questions in their field about the evolutionary relationship between instinct and classical learning.

Thanks in large part to the work of Columbia University neurobiologist Eric Kandel, animal behaviorists are steeped in the molecular mechanisms that underlie learning. “But we haven’t discovered the mechanism for how instinct gets passed on,” says Barron.

It’s very difficult for us to come to terms with just how much of our behavior is set in stone.—Lars Chittka
Queen Mary University of London

Starting in the 1930s, renowned psychologist B.F. Skinner, then a Harvard grad student, was influenced by Ivan Pavlov’s now-famous notion of operant conditioning. As the founder of the school of psychological theory known as radical behaviorism, Skinner went on to define learning as a product of positive or negative reinforcement. He was sure that all animal behavior arose from learning. By the late 1960s, zoologist Jack Hailman argued that instincts do exist, but they are coupled with some learned elements. Today, a fuzzy dichotomy exists in behavioral science circles, and instinct has become “the fixed and simple component of behavior,” says Barron.

Recent research has supported the idea that instinct might be deeply rooted in what are often considered learned behaviors. Another aspect of the serotonin-triggered epigenetic response in young rats to good mothering is changes in chromatin structure leading to higher expression of genes known to be linked to brain cell growth. The resulting increase in neural plasticity may be devoted, at least in part, to enshrining similarly nurturing behaviors in an offspring’s behavioral repertoire.

These studies do suggest that an organism’s experience can lead to changes in behavior that have a subsequent effect on their offspring, but tracking the further passage of inheritance over multiple generations is harder to tease out.

Robinson and Barron contend that natural selection can act on the epigenetic mechanisms, just as it does genetic traits. “At its core, this is still very Darwinian,” says Barron.

Beloit College biologist Ken Yasukawa thinks that the concept of instinct resulting from epigenetically encoded learning in ancestors is not all that revolutionary. “I don’t think this paper is as controversial as the authors think it is,” he says. University of Nevada biologist Vladimir Pravosudov doesn’t find much novelty in Robinson’s and Barron’s conclusions. “The main point is that these ideas were proposed a long time ago,” he says, “like more than 100 years.”

Pravosudov is referring to the late 1800s, when psychologist James Baldwin coined the term “organic selection.” Within a population, this so-called Baldwin effect suggests that at least some individual variation exists in the ability to learn, giving certain individuals an adaptive advantage to access resources that others have not yet been able to exploit. This enhanced ability to learn about a certain feature in the environment could, theoretically, become instinctual by being cemented epigenetically over multiple generations, says Pravosudov. “It’s actually shocking to me that they don’t reference Baldwin because it’s basically exactly what their article is about.”

Even though he did not cite Baldwin, Barron freely acknowledges that what he and Robinson propose borrows from his ideas. “The history of our argument for learning and its interplay with evolution is very old and goes back to that concept,” he says.

The framing of instinct as ancestral behaviors that were learned and encoded through epigenetic mechanisms, Queen Mary University of London ethologist Lars Chittka admits, will forever be seductive to citizens and scientists alike. “It’s very difficult for us to come to terms with just how much of our behavior is set in stone.”