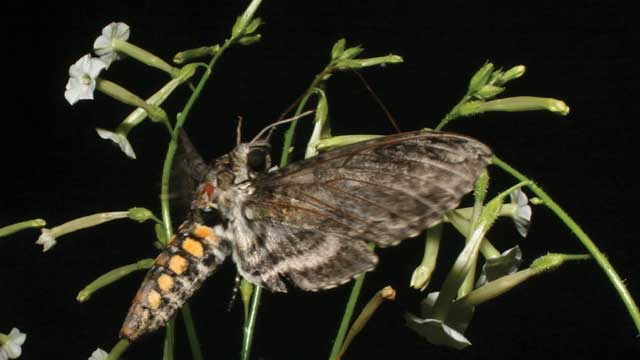 STEALTHY SNIFFER: Carolina sphinx moths may use olfactory receptors in their proboscises to determine the presence of an odor molecule produced by a plant.DANNY KESSLER, MAX PLANCK INSTITUTE OF CHEMICAL ECOLOGY

A stationary Carolina sphinx moth (Manduca sexta) is the Cinderella of the animal kingdom. The hummingbird-size insect has dull, dark wings that are mottled like charred wood, and a plump body reminiscent of a small breakfast sausage. Casual observers of M. sexta often see little else.

“They say, ‘Oh, it doesn’t look so nice. It’s just grey.’ But as soon as [the moths] start flying, they’re completely impressed,” says Danny Kessler, a pollination ecologist at the Max Planck Institute of Chemical Ecology in Germany. “They change their minds completely.”

Hawkmoths, the group to which M. sexta belongs, whir their wings like hummingbirds as they flit between flowers, hovering to drink nectar. M. sexta’s proboscis, longer...

Kessler studies the interaction between the Carolina sphinx moth, whose larvae are known as tobacco hornworms, and its preferred food source, the coyote tobacco plant (Nicotiana attenuata), to better understand how insect behavior affects a plant’s reproductive success. M. sexta adults drink nectar from tobacco’s skinny, white, trumpet-shape flowers, foraging from them at night and pollinating them in the process. Scientists have known for decades that the moth uses its antennae to detect the flowers’ scent—even from several miles away, Kessler says.

But Kessler wondered, if the moth is so sensitive, couldn’t plants cheat to exploit that sensitivity? As the moth drew in closer, it would become enveloped in a cloud of odor that could potentially overwhelm the insect’s sense of smell, Kessler reasoned. A scentless mutant plant, nestled among redolent wild-type ones, then might be able to lure a pollinator without having to expend any energy in attracting it.

In 2007, Kessler and his team set up field experiments in Utah to find out. The group used RNA interference on the tobacco plant to inhibit production of the chemical it uses to attract pollinators: benzyl acetone (BA). (To humans, BA smells like strawberries.)

The scent is like a motivation. It’s just like if you stay in front of a bakery, and you go in because it smells like fresh bread.—Danny Kessler,
Max Planck Institute of Chemical Ecology

To be in tune with a Carolina sphinx moth’s circadian rhythm, the team conducted the experiments at night. But the dark conditions made direct observations of moth-plant contacts difficult. Instead, the team counted the seeds from each plant as a proxy for hawkmoth visits. As they expected, plants without BA developed fewer seeds (Science, 321:1200-02, 2008; eLife, 4:e07641, 2015).

“If you don’t produce flower scent, you’re invisible to this hawkmoth at nighttime,” Kessler says. “This is what I assumed [it meant]—what everyone assumed, actually.”

But that assumption turned out to be wrong. Kessler and his team conducted follow-up experiments in an indoor wind tunnel about 7 feet long and 3 feet high by 3 feet wide. Here, they could blow a flower’s odor downwind to one moth at a time and observe its response more easily. The scientists saw that the scentless flowers were not invisible to the hawkmoths. They visited the scentless flowers just as frequently as the scented ones (eLife, 5:e15039, 2016). “It was a total surprise,” Kessler says.

To find out what was going on, Kessler and his team used a 3-D video tracking system to document the moth’s behavior with scented and unscented flowers. And when they timed the moths’ visits, they saw their answer: even though the moths visited both kinds of flowers equally frequently, their visits to the unscented flowers were briefer—about half as long.

Kessler and his team suspected the moth might be using its proboscis to discriminate flowers by smell. To determine how M. sexta was sniffing with its proboscis, the researchers looked in the organ for the presence of olfactory receptors. One—the olfactory co-receptor, Orco—was present at the tip of the proboscis.

“That was the smoking gun,” says Robert Raguso, a chemical ecologist at Cornell University who was not involved in the study. “My first reaction when I saw the paper was to be very excited and a little jealous.”

Twenty years ago, Raguso hypothesized M. sexta might have tiny odor-sensing hairs called sensilla on its proboscis. But, searching for them, he and others had come up empty-handed.

To experimentally confirm that the moth uses its proboscis to smell, Kessler’s team needed a way of excluding information from the antennae, which also house olfactory receptors. “Some [designs of] experiments are not so nice, like you cut off the antennae,” Kessler says. But such a manipulation renders moths unable to fly and likely changes their behavior in other ways.

So Kessler and his colleagues designed a Y-shape maze for the proboscis experiment instead. The moth could insert its proboscis at the entrance, which was covered by a fake flower. Then it had a choice: probe slightly to the left, where the air was laced with BA, or probe slightly to the right, where the air lacked BA. A vacuum applied at the entrance to the Y-maze prevented the air from leaking outside, precluding the moth’s antennae from catching a whiff.

It worked. The moths vigorously checked both chambers with their proboscises, but devoted more time to exploring the side with BA.

“The scent is like a motivation. It’s just like if you stay in front of a bakery, and you go in because it smells like fresh bread,” Kessler says. “If it didn’t, you might just pass by.”

A Carolina sphinx moth won’t spend as much time poking and prodding a flower that doesn’t smell. In turn, that flower will have a smaller chance of being pollinated. These dynamics showed that the plants “can’t cheat,” he says: how inviting they smell affects their reproductive success.

Kessler’s lab focuses on the plant’s ecology, but Kessler’s collaborator Markus Knaden, who studies insect senses at the Max Planck Institute, has garnered some insight into why smell might be crucial to a moth’s fitness. “From a distance, the moth should know whether this is a good flower to go to or not,” he says. “The moth needs to make a good decision, because flight is very energy-demanding.”

Raguso agrees with that assessment. “The rare quality of this paper, and some of the others by these authors, is that they make the extra effort to make a connection between physiological and behavioral mechanisms, and evolutionary and ecological phenomena,” Raguso says. That’s vital because it could help plant ecologists and insect biologists talk more, he says, which will help both groups to better understand pollination. Much of agriculture relies on this ecosystem service—a dance with not one, but two partners.

For Kessler, this work may be just the beginning of understanding what Carolina sphinx moths smell. “Most likely they have other receptors that can sense chemical compounds,” he says. “And there are many chemical compounds in nectar.”