Millipede sex is a shrouded affair that happens behind rows of legs. A female millipede’s sexual organs—a pair of vulvae—are located in the third body segment from the head. When she is ready to mate, she pushes her vulvae out from behind her legs. The male grabs her with his many legs, then clasps her vulvae with his two gonopods, each just a millimeter long, and inserts a hairy stub on the surface of a gonopod into the female. Since 1931, millipede researchers have suspected that a tube called a seminal canal in the gonopod carries sperm directly out of this stub and into the female. In a 2019 review paper of the genus Pseudopolydesmus, Zahnle and his colleagues supported the same idea. But nobody had had the opportunity to verify this—until now.

To get a closer look, Zahnle, along with Petra Sierwald, an associate curator of arachnids and myriapods at the Field Museum of Natural History in Chicago, and other colleagues, had turned to state-of-the-art imaging techniques, including scanning electron microscopy and ultraviolet fluorescence imaging. Applying these techniques on specimens from the collections of the Field Museum, including a pair of P. serratus preserved while copulating, the team reconstructed how millipedes mate. 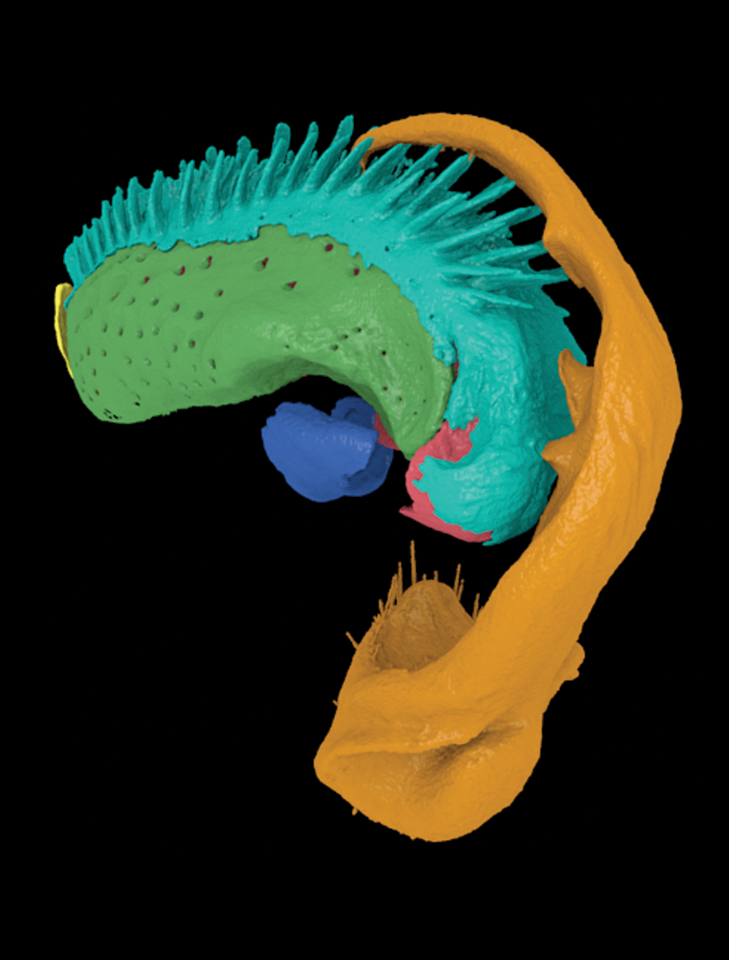 INTIATE VIEW: Researchers at the University of California, Davis, use multiple imaging techniques to study millipedes. This 3-D model was created using micro-CT imaging and shows genitalia of the female (green-turquoise) and male (orange).
Xavier Zahnle

They then looked inside the animals using an imaging technique called micro–computed tomography, or micro-CT, which shoots X-rays at a specimen to produce a series of grayscale images in which denser parts in the specimen show up brighter. A computer program compiles these images into a block of pixels, and the human user directs the software to color the different structures in the block to produce a 3-D replica of the specimen. Researchers can study such digital models of specimens “from every angle,” says Zahnle. “You really, really, really get a sense of how things are oriented, and what’s next to what.”

Zahnle’s micro-CT images revealed a surprising twist in how a male millipede delivers sperm. Rather than confirm that the seminal canal leads directly to the hairy stub outlet, the images showed instead that the canal bypasses the hairy stub and sends the sperm into a chamber. Only then do the sperm exit through the hairy stub. The canal “makes a complete loop, which is totally mental,” says Zahnle, and “not at all what we described in our [2019] paper. We were wrong.” He and his colleagues published their results in Arthropod Structure and Development earlier this year.

Javier Alba-Tercedor, an aquatic entomologist at the University of Granada in Spain who was not involved in the work, says Zahnle’s study “is a good example of what can be achieved by using micro–computed tomography.” Alba-Tercedor, who has won awards for his micro-CT work, says the most time-consuming part of the technique is coloring the different structures in the images. But once that is completed, the datasets can be used by other researchers to study new structures in the specimens.

Indeed, Sierwald sees micro-CT as a game-changer for millipede studies. When she started studying millipedes in 1997, micro-CT was rarely, if ever, used in entomology. Her initial plan to examine female millipedes’ vulvae from the animals’ discarded molts failed because the “darn millipedes eat their molts.” Without micro-CT, “it would have meant killing a lot of millipedes in order to dissect them,” she says. With micro-CT however, no dissections are necessary, meaning that fewer animals are killed and those that are stay intact for future research, “so that’s really cool.” She adds that micro-CT helps to “really make a big step forward” in understanding how the sexual organs function together.

In the long run, Sierwald says, the team hopes that the imaging methods will help researchers identify millipede species, monitor their geographic distribution, and learn more about how different taxa are related to one another. She also suspects that the secretions that millipedes produce during sex might have commercial or pharmaceutical uses.

Thomas Simonsen, an entomological researcher and curator at the Natural History Museum Aarhus in Denmark who was not involved in the research, says that the new study is “excellent,” and agrees with Sierwald that the methods could aid millipede research. He notes that, along with DNA studies, it’s important to have detailed knowledge of morphology to “understand the diversity and evolution of arthropods,” especially in taxonomic groups for which phylogenetic relationships are poorly understood.

Zahnle is focusing on male millipedes now. To him, millipedes display myriad forms and functions. They’re not “just lots of legs,” he says, but range from “flat-back to large cylinders to tiny bristles.” After a steep learning curve with micro-CT, Zahnle finds himself in “good company” among the growing number of arthropod researchers using the technique. He wants to know if the unexpected loop in the sperm canal of P. serratus shows up in other species, he says. “I want to image them all.”