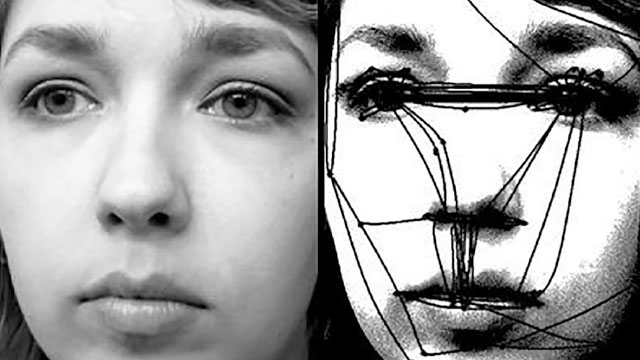 LOCKING EYES: The path an observer’s eyes take as they scan an image of a human face is superimposed over that image. Dots indicate pauses or fixations in eye movement, and lines show the rapid jumps or saccadic eye movements between those points.WIKIMEDIA COMMONS/SPOOSPA

Just the briefest eye contact can heighten empathetic feelings, giving people a sense of being drawn together. But patients who suffer from autism, even in its most high-functioning forms, often have trouble establishing this sort of a social connection with other people. Researchers are delving into what’s going on behind the eyes when these magical moments occur, and the hormones and neural substrates involved may offer hope of helping people with autism.

University of Cambridge neuroscientist Bonnie Auyeung and colleagues gave oxytocin—a compound commonly referred to as the “love hormone,” as it’s been found to play roles in maternal and romantic bonding—to both normal...

Oxytocin, a neuropeptide hormone secreted by the pituitary gland, has long been known to activate receptors in the uterus and mammary glands, facilitating labor and milk letdown. But research on the neural effects of oxytocin has been accelerated by the availability of a nasal spray formulation of the hormone, which can deliver it more directly to the brain, also rich with oxytocin receptors. Auyeung adds that her study used a unique experimental setup. “Other studies have shown that [oxytocin] increases looking at the eye region when presented with a picture of a face,” Auyeung says. “The new part is that we are using a live interaction.”

James Rilling, a social cognitive neuroscientist who directs the Laboratory for Darwinian Neuroscience at Emory University and was not involved in this research, says that the results are promising. “The ability of oxytocin to get the men to look at the eye region of the face more is probably very important because we receive so many social cues from the eye region,” he says. “If you’re not attending to those social cues, you miss a lot, and then in turn you miss the opportunity to learn a lot about appropriate social behavior.” If oxytocin could normalize this ability for those with autism, Rilling adds, it would “give more opportunity to work on social skill building.”

Takahiro Koike and colleagues at Japan’s National Institute for Physiological Sciences have used functional magnetic resonance imaging (fMRI) to suggest one clue to the neural mechanism stimulated by eye contact. In people gazing into each other’s eyes, the researchers found that both subjects showed enhanced neural synchronization with one another in a region on the side of the right frontal lobe, the right inferior frontal gyrus, which is associated with social communication and empathy (NeuroImage, 125:401-12, 2016).

In 2013, Elisabeth von dem Hagen, then of the Medical Research Council in Cambridge, U.K., and colleagues showed pictures with either averted or direct gazes to males with autism spectrum conditions and found that, compared with controls, these subjects responded to direct gaze with reduced activity in the brain’s medial frontal cortex, temporoparietal junction, posterior superior temporal sulcus region, and amygdala—regions that have been described as part of a “social brain” system, key to inferring others’ states of mind (Cerebral Cortex, 24:1485-92).

Recent animal experiments shed further light on the links between eye contact and behavior. Sébastien Ballesta and Jean-René Duhamel of France’s Centre National de la Recherche Scientifique (CNRS) found that when they offered macaques the option to either reward or punish partners, they saw differences in how the animals gazed at their fellow monkey. When one of the monkeys decided to provide a juice treat to its partner, it tended to engage in more eye contact. But if the animal chose to deliver an unpleasant puff of air into the face of its partner, it usually turned away or blinked (PNAS, 112:15516-21, 2015).

A behavior that seems so simple and natural to many of us can be a troubling psychosocial event to individuals suffering from autism. But as researchers dig into the neural, hormonal, and behavioral drivers at play behind eye contact, there may be hope that some of the neurological and behavioral symptoms of autism spectrum conditions may be alleviated (See “The Genes Underlying Autism Are Coming Into Focus,” here).