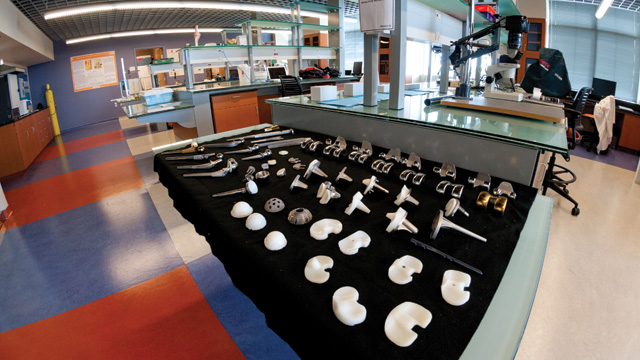 Some people drive more aggressively than others,” says bioengineer John DesJardins. But he’s not talking about cars; rather, he’s referring to artificial joints. As director of the orthopedic design and engineering lab at South Carolina’s Clemson University, he spends much of his time inspecting plastic and metal knee, hip, and shoulder replacements worn out by the reckless “driving” that is human locomotion.

More than 800,000 joints are now replaced each year in the United States, and DesJardins estimates that 90 percent of these surgeries go off without a hitch, and are still functional 10 years after surgery. However, the remaining 10 percent of artificial joints need to be replaced within that time period. These are the artificial joints that grab his...

John DesJardins spends much of his time inspecting plastic and metal knee, hip, and shoulder replacements worn out by the reckless “driving” that is human locomotion.

Right now, DesJardins’s registry holds more than 1,000 joints, including some 600 knees, after acquiring a collection from the Biomotion Foundation, a West Beach, Florida, orthopedic research center. And as it grows, he’ll be able to perform “larger studies to investigate material or design performance.”

Clemson’s orthopedics lab led the field long before DesJardins’s latest venture. “Clemson’s claim to fame is orthopedics,” says Martine LaBerge, head of the university’s bioengineering department. Much of the early research in joint replacement, such as studies of how bone grows into metal implants, was done at the university in the 1960s. And the group has kept up its reputation over the decades, she adds, in part because it’s one of the top facilities in the country with the technology and expertise to simulate knee movement in the lab.

Knee simulators, contraptions that bend an artificial knee as if it’s walking, can take 85,000 steps each day and travel the average distance walked over two or three years—5 million steps—in less than three months. The ability to hit such a fast-forward button to test new designs and materials is invaluable to those in the joint--design business, and DesJardins says he’s visited by “pretty much every large and small implant company,” so that they can test their joints on his simulators. The lab also uses those simulators to design and test new implant materials. Around 10 years ago, DesJardins did early research with the London medical device company Smith & Nephew to develop a harder metal that was less susceptible to scratching, which can more quickly wear out the plastic components of the implant, and the result was an artificial knee made of oxidized zirconium paired with traditional implant plastic. After the joint replacements hit the market, DesJardins performed knee simulations to test just how well the oxidized zirconium implants held up compared to the industry standard, cobalt chromium. He found that they sustained fewer scratches, and accordingly decreased the damage rate to the plastic parts of the implant by 82 percent (Wear, 264:245-56, 2008).

But it’s the failed joints taken from patients that really excite DesJardins. Hospitals are beginning to send him worn-out oxidized zirconium knee implants, and he looks forward to doing follow-up studies on joints that have gone through a decade of wear and tear in actual patients, not on simulators. “Now we’re able to look back and see how our predictions fared,” he says.

Such studies require many retrieved implants, and Clemson isn’t limited to its own relatively small collections. Other programs across the country are working to establish common collection procedures and to encourage collaboration. The Hospital for Special Surgery in New York City houses the largest trove in the world, with more than 20,000 retrieved implants collected since 1977. However, Clemson’s South Carolina location may help diversify the patient pool, generating more data for all the collections to reap. “John understands he’ll never catch up to us; we’ll always have more implants than he does,” says Timothy Wright, director of the Hospital for Special Surgery’s Institute for Implant Analysis. But with such long-term, large-scale research projects, every bit helps. “There’s a lot of work for all of us, trust me,” he says.