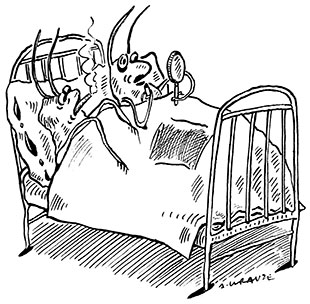 ANDRZEJ KRAUZEIn the spring of 2013, something strange was happening to Shelley Adamo’s cricket colony at Dalhousie University in Halifax, Nova Scotia. The insects appeared perfectly healthy, but they were dying at a younger age than usual, and the females weren’t laying eggs. “Usually you can tell when they get sick—they stop eating and look lethargic,” says Adamo. “But these animals were fine almost until the day they died.” In fact, she would later learn that the males were better than fine, taking less time to initiate courtship with a female.

“There’s a general sort of philosophy in the literature that animals that are infected with diseases, particularly viruses, have certain behaviors or display certain characteristics which make them less-desirable mates,” says University of Massachusetts Amherst insect virologist John Burand. But these crickets didn’t seem to be following the rules.

To figure out what was going on, Adamo...

Clearly the cricket had some sort of infection. Adamo took a bit of the fat body down the road to Dalhousie insect virologist Don Stoltz, who put the sample under an electron microscope. Sure enough, the cells were “absolutely packed with viral particles,” Adamo says—packed so closely, in fact, that they were refracting the blue light she had seen. “I don’t even know how the cells were still alive.”

The size and shape of the viruses—and the iridescent blue glow—suggested a preliminary identification of cricket iridovirus (CrIV), which Adamo confirmed with genetic testing. The virus, it turns out, can be carried by lizards that have been fed store-bought crickets, and just months earlier, Adamo’s lab had brought in three bearded dragons to serve as predators in a stress experiment. “The lizard doesn’t get sick, but it can be a carrier,” she says. “And it gave [the virus] to my crickets.”

Having spent the last few months on a project examining how stress alters immune function, the lab was devastated. Infected crickets do not make the best models of normal immunity, and the group was forced to discard the data. “I had to scratch three months’ worth of work,” Adamo says. But the infection also presented an opportunity: to explore why these virus-infested crickets weren’t acting sick.

Lab tests confirmed that the crickets exhibited no signs of lethargy, nor any changes in locomotion or antipredator behaviors. And the crickets’ libidos seemed as strong as ever. Infected males were even more sexually motivated than healthy males, it seemed, taking less time to begin courtship when presented with a new female (J Exp Biol, doi:10.1242/jeb.103408, 2014). “They were much faster off the mark,” Adamo says. “That was really very surprising”—especially because the viral infection had already rendered the animals sterile.

Over the last 10 years, Burand has documented another example of an animal that increases sexual activity when infected. The Helicoverpa zea nudivirus 2 causes female corn earworm moths (Helicoverpa zea) to produce between five and seven times more sex pheromone and attract twice as many males as uninfected moths. “The system that I’ve worked on has been identified as an oddball system, the exception to the rule,” Burand says. But Adamo’s crickets appear to be a new example of how viruses can spur rather than dampen their hosts’ sex drive.

Suspecting that the crickets’ ramped-up sexual behavior must benefit the virus in some way, Adamo’s group tested whether the infection could be transmitted during courtship. Placing uninfected crickets—newly acquired from Adamo’s colleague Sue Bertram at Carleton University in Ottawa, Ontario—in separate enclosures within the same room as infected crickets was not enough to result in transmission. Romantic interactions were required. Three of the six new females courted by an infected male did contract the virus. But it’s not the act of sex per se that dooms the cricket; rather, the insects’ courtship behaviors seem to be enough, Adamo says. “You didn’t actually need to have copulation, just good, close physical contact.”

“It’s just beautiful biology,” says animal virologist Daniel Rock of the University of Illinois at Urbana-Champaign. “These large DNA viruses are genetically complex, [and] they encode interesting genes that manipulate host responses, [which] is probably linked to successful replication and perpetuation of virus.”

Adamo suspects that the virus targets the immune system of the cricket. Immune proteins are among the many proteins whose production is regulated by the fat body—the organ that is overrun with iridovirus in infected crickets. The pathogen is also known to directly infect hemocytes, the insect equivalent of white blood cells. “[The virus] got a stranglehold on the cricket’s immune system,” Adamo says. And without a typical immune reaction to the infection, the crickets don’t feel sick.

Many more questions remain, however. Front and center: “How is it all accomplished on the molecular level?” Burand asks. Does the virus encode a protein that directly modifies its host’s behavior? And how does the virus actually jump from one individual to the next? “If the virus is transmitted during this intimate contact during sexual behavior—say, the contact of the antennae—how does the virus get to the antennae?” Burand says.

But Adamo won’t be the one to answer those questions. Upon completion of their experiments, she and her colleagues euthanized the remaining animals, then spent the next six weeks sterilizing the lab. Now, with some more crickets from Bertram, Adamo’s team is working to build a new, healthy colony of crickets to resume their research on stress’s impact on immunity. “I probably had a few thousand crickets,” Adamo says. “It was a big colony, and I miss it.”