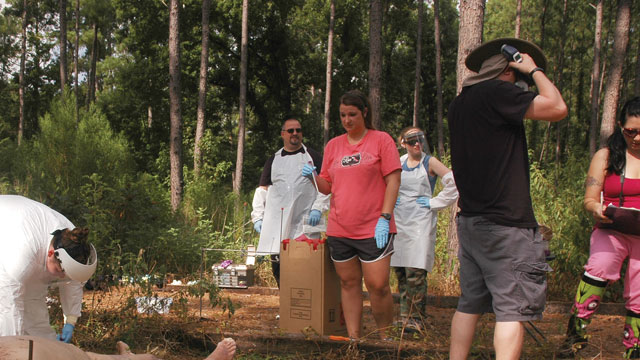 Fans of the multitude of forensic science TV shows currently saturating the airwaves are familiar with the challenge of determining how long a recently discovered body has been dead. Temperature, humidity, and rainfall all affect the rate of decomposition and hence skew estimates of the postmortem interval. Clues to the time of death have also come from the order of arrival of a wide variety of organisms—mostly insects and fungi—that transform a corpse into a thriving ecosystem. Now, armed with next-generation sequencing techniques, scientists are hoping to pin down the postmortem interval with greater certainty by characterizing fluctuations in the necrobiome—the complete roll call of bacteria that flourish in every...

Entomology has aided murder investigations at least since the 13th century, when Chinese forensic medical expert Song Ci wrote about how he helped identify the perpetrator of a brutal murder using his knowledge of blowflies’ life cycles and behavior. Yet it has only been in the last 30 years that entomology has been systematically applied to forensics. Taking a snapshot of the insects present on and inside rotting corpses and noting the insects’ stage of development can not only help estimate the time of death, it can indicate whether a body has been moved and, if so, perhaps where it came from. 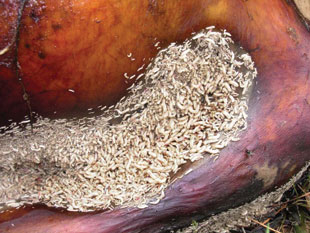 A GHASTLY FEAST: A mass of maggots writhes between the chest cavity and arm of a cadaver in advanced stages decomposition.NATALIE LINDGRENBut if bodies are buried or wrapped in plastic, tracking insects and their larvae may not always be possible, says Sibyl Bucheli, an entomologist at Sam Houston State University (SHSU). Bucheli has studied arthropod infestations of more than 50 cadavers at the Southeast Texas Applied Forensic Science Facility—one of four so-called “body farms” around the U.S. where cadavers can be studied in natural settings. Looking for a more reliable estimate of the postmortem interval, Bucheli has turned to bacteria, which act as the prime drivers of the decomposition process. “The reality is that insects may not be there, but bacteria will always be there,” says Embriette Hyde, a metabolomics graduate student at Baylor College of Medicine in Houston.

To characterize the necrobiome, Bucheli and her colleagues placed two cadavers among pine trees and thick underbrush at the facility, one in September 2011 and the other two months later. To maintain a consistent sampling technique, a single graduate student took swabs from the mouth and rectum before, during, and after the “bloat stage”—a visually detectable stage of decomposition in which gases created by billions of respiring microbes inflate a corpse until its fluids are expelled out of various openings. The student also took samples from internal cavities and organs after the bloat stage, once the torso had split open.

Bucheli’s team is not the first to explore the necrobiome. A handful of other groups have identified bacterial strains from the skin of cadavers using cell-culture techniques in controlled laboratory settings. Those studies, however, underrepresent the true microbial population, according to Bucheli, because the vast majority—one estimate says 99 percent—of the bacteria that populate dead bodies aren’t easily grown in the lab.

Bucheli and her colleagues wanted a more in-depth look into cadavers’ microbial communities, so they struck up a collaboration with Joseph Petrosino, the director of the Alkek Center for Metagenomics and Microbiome Research at Baylor College of Medicine. Petrosino’s research focuses on experimental medicine and clinical applications. “The state of the art is the multiomics approach—genomics, proteomics, metabolomics, transcriptomics, and so forth,” he says. “There’s no reason these approaches can’t be applied to forensics as well.”

Petrosino analyzed the samples from the cadavers using deep sequencing of the 16S rRNA gene—a gene that is characteristic of bacteria but not found in eukaryotes. Most of the gene’s sequence is conserved across the bacterial kingdom, but it also contains many regions with unique sequences that serve as microbial fingerprints. This next-generation sequencing technique gives researchers not only a better sense of what species are thriving, but also a more expansive list of less abundant microbes that are missed by other sampling techniques.

The microbes Petrosino identified with 16S rRNA sequencing overlapped considerably with those discovered in previous cell-culture studies, but many novel strains turned up as well. The most notable finding was a distinct shift from aerobic to anaerobic bacteria as the cadavers transitioned from the pre-bloat phase to the post-bloat phase, in which tissues lose their oxygenated blood (PLOS ONE, 8:e77733, 2013).

The researchers discovered significant differences in the necrobiomes of the two cadavers as well as differences within individual bodies. In general, microbial richness was found to increase along the gastrointestinal tract, with diversity significantly greater in the colon than in the mouth. Adding complexity to the analysis is the fact that different parts of the same body can actually be in different stages of decomposition at any given time. Additional studies, funded by the US Department of Justice and employing multiple cadavers decomposing under various environmental conditions at different times of year, are currently underway at the southeast Texas body farm.

“It takes a special group of people who will not mind coming in contact with decomposing human remains,” says Jeff Tomberlin, an entomologist at Texas A&M University, who was not involved in the research. “They’ve definitely set themselves up as one of the unique labs in the world for examining the species associated with the necrobiome.”

Correction (February 10): In the original version of this article, Todd Deyne's surname in the caption of the topmost image was misspelled. The Scientist regrets the error.