ABOVE: Researchers pinpoint how C. elegans (pictured) manages to expel food from its mouth. © ISTOCK.COM, HeitiPaves

Steve Sando was peering through a microscope at a miniscule worm squirming to escape a light when he made a surprising discovery. The type of worm he was observing, Caenorhabditis elegans, uses a muscular pump to swallow up tasty microbes from its surroundings. But when a worm was exposed to light, Sando noticed one day in early 2014, that suction reversed course—jetting liquid out of the worm’s tiny, transparent throat. As he watched the little creature make this movement, the first thought that came to mind was, “Oh my god, it must be spitting,” recalls Sando, then a doctoral student working under MIT molecular geneticist and neurobiologist Robert Horvitz. “I pulled my laptop out of the microscope and ran down the hall to show everyone in the lab.”

Before this, the model was that the smallest controllable unit of muscles is a single muscle [cell].

That was the first of many worm spits that Sando would watch under a microscope over the next eight or so years. By recording several hundred worms and carefully sifting through countless hours of footage, Sando and his colleagues revealed that individual muscle cells in the C. elegans mouth are able to carry out two tasks simultaneously by contracting in different patterns at different ends of the cell. “Before this, the model was that the smallest controllable unit of muscles is a single muscle [cell]” Sando says, so this finding “changes how we think about how animals generate behavior.”

The work that set the stage for Sando’s study had been initiated several years earlier by another former graduate student in the lab, Nikhil Bhatla. Bhatla was interested in a mystery that had pestered the C. elegans community for many years: How do these organisms detect and escape light, despite lacking light-sensing molecules? Curiously, he discovered, light not only changed how the worms moved, but also made them stop eating. He also found that the proteins controlling the worms’ ability to evade light were encoded by genes related to sequences encoding taste receptors in insects.

Through a series of experiments, Bhatla revealed that these genes also controlled the worm’s response to bad smells—specifically, to the odor of hydrogen peroxide, which is generated when light hits biological tissue. “His ultimate conclusion was that the worms kind of ‘taste’ the light based on these molecules,” Sando says.

But solving that mystery raised more questions. Bhatla noticed that although C. elegans stopped eating in the presence of light, the muscles of its feeding tube, or pharynx, would briefly resume rapidly moving in a pump-like motion, just as if it was gobbling down a meal. Following this movement, the worms would occasionally blow bubbles out of their tube-like mouths. 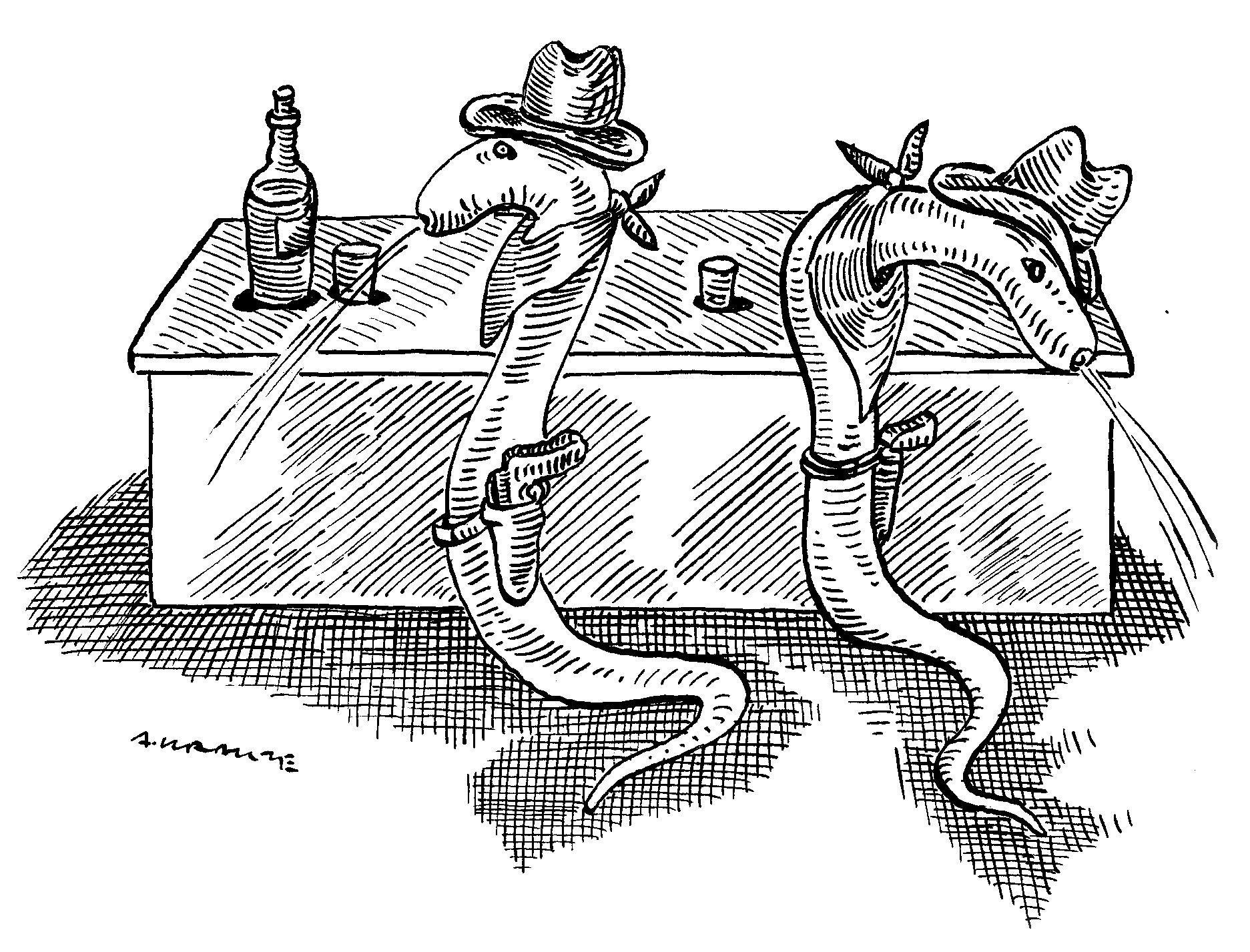 Sando says he wanted to get a closer look at this strange behavior. He decided to slightly flatten the worms before viewing how they moved in response to light. The thinking was that “if we squish them a little bit, maybe that’ll slow them down and help us see what the muscles are doing,” he says. This adjustment did the trick—it worked so well, in fact, that Sando pinpointed muscle motions that appeared to be spitting behavior in the first batch of flattened worms he observed under a microscope. “It was one of those really cool eureka moments,” Sando says.

After confirming that this behavior was indeed spitting—using tiny plastic beads to show that liquid was being expelled from the worms’ mouths— Sando and his colleagues published that initial finding in 2015. They then spent years analyzing videos of slightly squished worms spitting in slow motion to try to pinpoint the exact muscle movements behind this behavior. Typically, when a worm eats, three muscle cells within the pharynx contract and relax rapidly to propel food into the body. The researchers found that when the worms spat, the front portion of each muscle cell contracted, holding the mouth open, while the back portion continued a pumping motion, expelling food from the worm’s mouth. 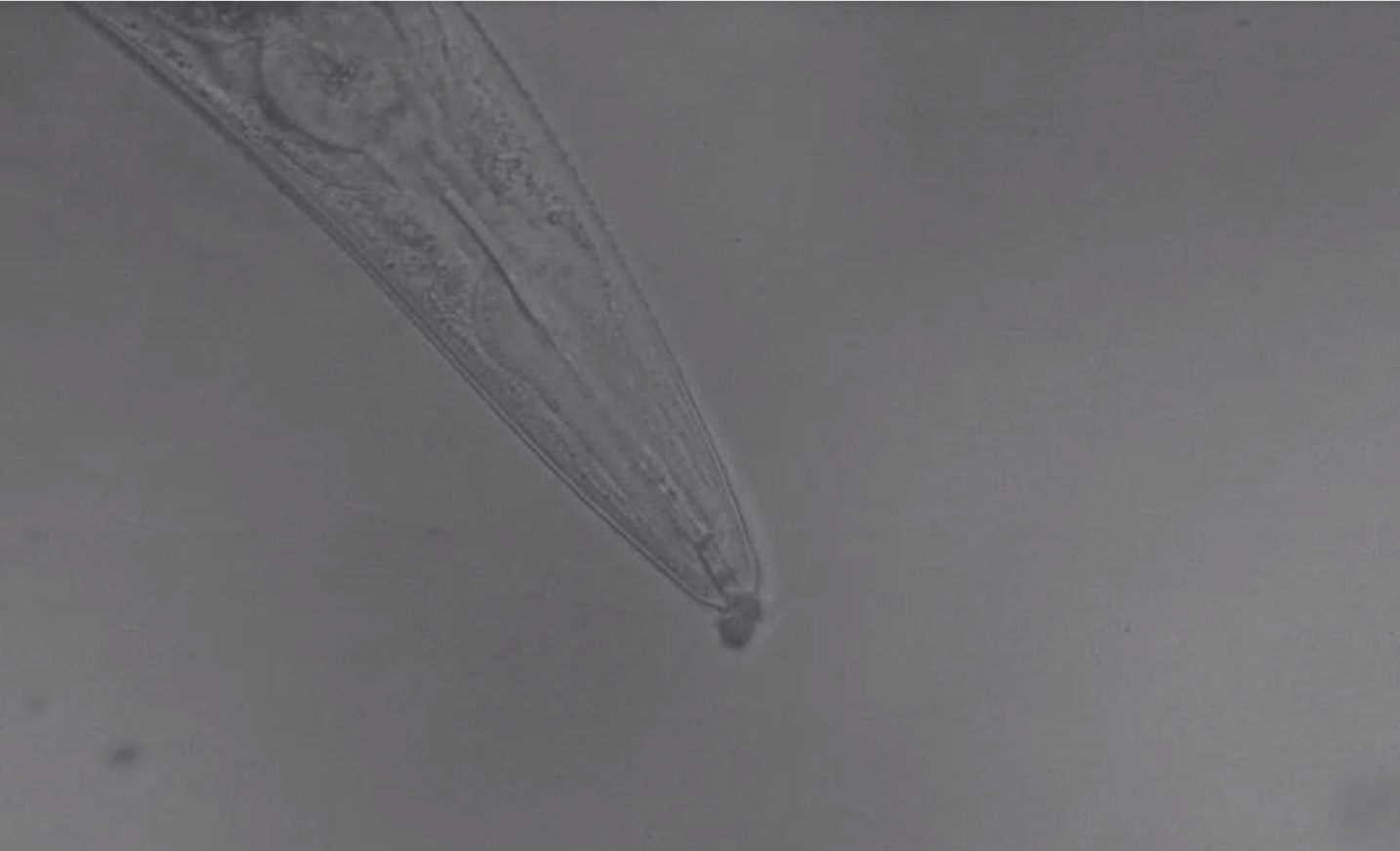 Fur ther experiments revealed that these movements were controlled by a single neuron within the pharynx. Using fluorescence imaging to measure levels of calcium ions, which help regulate the activity of neurons and muscles, the group observed that calcium levels stayed high at the front of a muscle cell and low at the back during spitting. Sando, now a postdoc at MIT, and the rest of the team published their latest results this July .

“The finding of a compartmentalized signal in a muscle [cell] was completely unexpected to me,” says Manuel Zimmer, a neurobiologist at the University of Vienna who was not involved in the work. This study reveals that, “even from a very elementary behavior like feeding, if you look at it carefully and quantitatively, you can actually learn a lot about basic neuronal mechanisms.” Zimmer adds that he’d like to know why worms spit at all in response to the hydrogen peroxide generated by light—and whether such behavior might have any benefit to the organism’s survival.

Whether or not this phenomenon of different, simultaneous actions by a single muscle cell exists in other, larger animals or is unique to C. elegans remains an open question. Aravinthan Samuel, a biophysicist at Harvard University who was not involved in the study, notes that in organisms with fewer cells, those cells tend to be more sophisticated—so it is unlikely that muscle cells in bigger organisms such as humans would split their actions in this way.

Broadly speaking, however, this study is a significant step toward understanding how neuronal circuits work, Samuel adds. To date, there has yet to be a complete neurophysiological model of even simple behaviors, he says, but “these guys have a big piece of that puzzle with this, and it’s a step toward real models of real brains.”