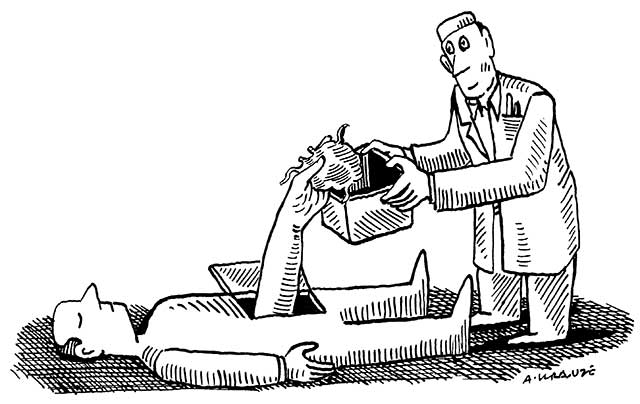 It’s the wee hours of the morning, and Joe Thome, a graduate student studying immunology at Columbia University, gets a text message notifying him that someone has just died. It’s not someone he knows. In fact, he’ll never know who it is. The deceased was an organ donor who, in addition to opting to donate life-giving organs for transplantation, donated tissues for research.

Each year in the New York City metropolitan area, about 60 organ donors bequeath to scientists organs and tissues that can’t be transplanted into patients. Several times a month, at all hours of the night, Thome and the rest of immunologist Donna Farber’s lab at Columbia University receive messages advising them that some of those tissues will soon be arriving in the lab. “Luckily we live in New York City, and New York City never has any set hours,” says recent Columbia PhD...

When Farber arrived at the Columbia University Medical Center’s department of surgery and the Columbia Center for Translational Immunology (CCTI) in 2010, she recognized that the New York Organ Donor Network (now called LiveOn New York) could be an incredible resource for human immunology research, which usually depends on immune cells isolated from blood samples. But most of the real action of the immune system takes place within tissues, and typically the majority of tissues available for research are those biopsied from sick patients. Any conclusions drawn from such tissues are tainted by the fact that they are diseased. Because organ donors have to be healthy and free of viruses such as HIV and hepatitis, untransplanted organs are exactly what Farber needed to understand how the human body works in a disease-free state.


Although immune-cell locations and functions have been mapped in mice, Farber and her team wanted to know if those data held up in humans, in particular for T cells. “There really hasn’t been a nice baseline of healthy T-cell immunity,” says Thome.

So Farber developed a protocol for organ procurement with LiveOn New York, which relies heavily on transplant coordinators, who manage consent from the next-of-kin, and on-call surgical residents, who relay the news of a new donor and go into the operating room to secure tissues for research. These can include any combination of blood, lymph nodes, bone marrow aspirates, and parts of spleens, lungs, intestines, salivary glands, tonsils, and thymuses.
Farber says the medical director of LiveOn New York told her that no one has ever wanted so many tissues from individual donors. But Farber set her sights high, thinking she would only get access to 10 or so donors per year. Since 2011, her lab has studied organs from more than 200 donors, ranging in age from infancy to early ’70s. “I never imagined we would get that many,” she says.

Thome has handled about 150 of those sample sets. He helped optimize the methods for isolating immune cells and brought the total processing time down to 4 hours, far from the 36 it took the lab the first time it worked with donor tissue.
“We really had to scale everything up,” Thome says. The group has done a lot of cell and tissue viability testing, compared isolation and storage techniques, and analyzed the cells using techniques such as flow cytometry, microscopy, and sequence analyzed for specific immune genes. The researchers also receive de-identified serology results as well as information on the donors’ sex and age, allowing them to correlate results about the immune-cell function and location with a number of different variables.

“Putting this together on the spectrum of ages, you can really get a nice idea of how dynamic T-cell immunity really is in humans,” Thome says. He and Yudanin published a study late last year showing how different T-cell subsets organize themselves within human tissues (Cell, 159:814-28, 2014).

They found that within a given organ, the frequencies of each cell type were remarkably consistent from person to person. “Generally we think of the immune system as a circulating surveillance system, but as it turns out, it is really very much compartmentalized,” says Yudanin.

This is a theme that Farber says keeps popping up in their data. “If you go finely through the anatomy, each tissue has its very characteristic set of T cells.” Although Farber’s lab has so far concentrated on T cells, the group is now characterizing myeloid cells, such as dendritic cells.

They also share tissues with collaborators who study other immune cell types, including B cells and innate lymphoid cells (ILCs). A study from University of Pennsylvania immunologist David Artis’s group, published in Nature earlier this year, used donor tissues to identify and characterize ILCs within human adipose tissue and combined those findings with functional mouse studies to show how those cells regulate fat-cell metabolism (519:242-46, 2015).

Farber says her team will now study immune responses to common chronic viruses, like cytomegalovirus, that can resurface in patients who are immunosuppressed. They plan to map out where the viruses and the T cells controlling them reside within the human body.

Although they don’t know who the donors are, each time the lab receives a donation, LiveOn New York sends the donor’s family a thank you letter written by Farber. Thome says that “keeping everything human” is important to making the whole process work. “You can’t treat anything like it’s just a sample,” he says.

He and Yudanin say it’s especially hard when tissues arrive from young donors or after a traumatic death. “I’ve processed 150 of these donors, and it still impacts me that this is a human life, which I think never goes away, nor should it,” says Thome.

Yudanin says her experience working with these organs has helped her communicate the importance of donation to her family and friends. “I’ve actually convinced a lot of my family members to become organ donors,” she says.