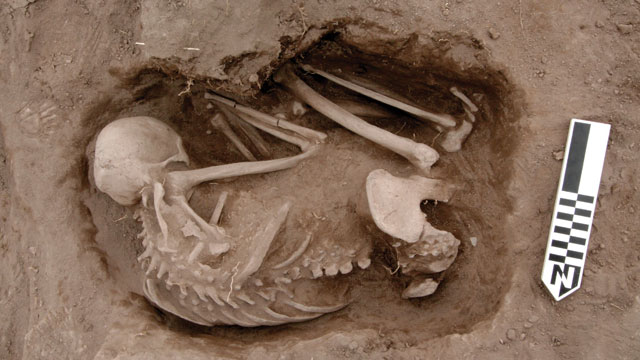 DNA INFORMS HISTORY: In situ remains of an elderly woman who died after the conquest of Xaltocan in 1395 and was buried under a patio near one of the city-state’s houses.© LISA OVERHOLTZER

In the northern basin of what is now central Mexico, not far from Mexico City, the ancient Otomí people lived on an island in the middle of Lake Xaltocan. From the 11th to the 14th centuries, the town of Xaltocan developed into one of several bickering city-states in the region that eventually succumbed to conquest by the Tepanecs, and was ultimately swallowed up by the Aztec empire. 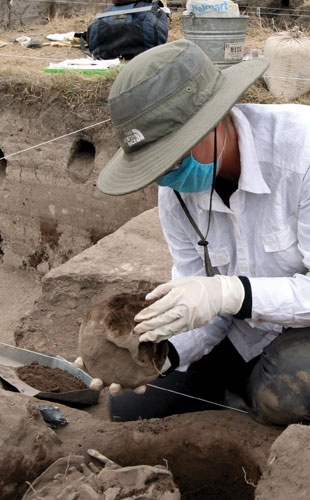 TEETH TELL A TALE: Research team member Lisa Overholtzer removes teeth from the skeleton of the elderly woman pictured on the preceding page to be used for mitochondrial DNA analysis.© LISA OVERHOLTZERPart of Otomí practice was to bury family members under the patios adjacent to their homes. Deborah Bolnick, a professor at the University of Texas at Austin, and her colleagues obtained mitochondrial DNA from teeth and bone samples of 25 people interred at three households in Xaltocan. The residents range from babies to seniors, and radiocarbon dating suggests that some of the remains date from 1325 to 1475. Ten of the individuals lived in Xaltocan before the Tepanec conquest in 1395 and 15 afterward.

The researchers screened the mitochondrial DNA to compare the diversity of lineages within pre- and post-conquest remains. The individuals all belong to one of the haplogroups A2, B2, C1, or D1, which are the most common lineages among Native Americans. Bolnick’s team found that D1 and B2 were more common before the conquest and that A2 and C1 became more prevalent afterward. They also found that there were no close relationships between the haplotypes within these groups before Xaltocan was sacked and the haplotypes present afterwards.

“It’s certainly consistent with some kind of broad-scale demographic shift,” says Graciela Cabana, a molecular anthropologist at the University of Tennessee, who was not part of the study. Theodore Schurr, a professor at the University of Pennsylvania, says population turnovers have been seen in other regions of the world, such as prehistoric Siberia, but are often thought to be driven by climate and environmental forces. The Xaltocan findings, he says, seem to indicate more “about warfare and power and shifting alliances and the impact on the common population on the ground. So that then leads to, at least on the basis of the maternal lineages, some differences in the [haplo]types that are present pre- and post-conquest in this particular town.”

An abandonment and repopulation of Xaltocan is also supported by Morehart’s studies of the ancient Mesoamerican method of growing foods in floating garden beds, a practice known as chinampa agriculture. These artificial island garden beds were constructed in shallow lakes to farm maize, beans, and other crops. “These chinampas date to the height of Xaltocan as an independent kingdom. In other words, after the supposed collapse or conquest of Xaltocan at the end of the 14th century, the chinampas were abandoned,” he says.

But the researchers caution against using the genetic evidence to generalize about the behavior of the entire town. “My guess is there’s something else happening, some demographic change at the site, but maybe not a complete population replacement,” says Bolnick. It could be that only the elite citizens of Xaltocan fled, or that there was a reorganization within the community. “We also don’t know whether we could be looking at something that is idiosyncratic to these households,” says Deborah Nichols, an anthropologist at Dartmouth College.

Bolnick further points out that her study only looked at the matrilines, and it’s possible that some continuity persisted among the male lineages. Cabana says there’s good reason for using mitochondrial DNA, however. There are multiple mitochondrial genomes in a cell, and ancient DNA is often degraded. “So for us to do studies that require a large population size, the only shot we have to do that is to go after mitochondrial DNA. By definition that limits the scope of the analysis to maternally derived DNA [in order] to make inferences about the population as a whole,” Cabana says.

Bolnick says her group is now collecting data from the Y chromosome and from biparentally inherited markers, including 15 loci of short tandem repeats and the amelogenin locus, which can be used to determine the sex of the individual. Morehart says the genetic data is valuable in offering another line of evidence, in addition to the historical and archeological records, about the methods of conquest during this period. “This provides one line of data looking not just at historical change in Xaltocan, but also potentially some of the imperial strategies the Aztecs may have maintained in moving populations from here to there, something that we don’t know too much about archaeologically.”