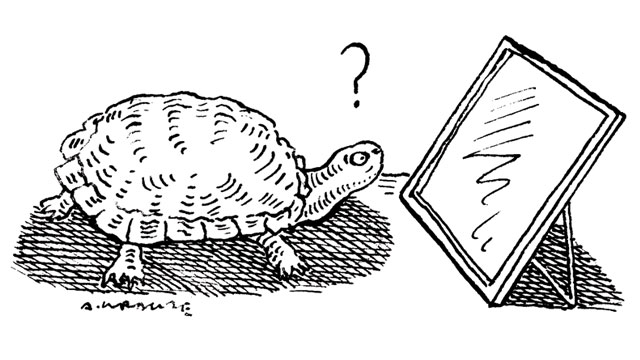 In the late 19th century, German zoologist August Brauer toured the mountains of Mahé island in the Seychelles archipelago off the east coast of Africa, collecting specimens as he went. In 1901, three of his finds—freshwater turtles that seemed to belong to a unique, endemic species—made their way to the Zoological Museum in Hamburg, Germany. There, Austrian herpetologist Friedrich Siebenrock inspected the specimens, placing them in a new taxon, Sternotherus nigricans seychellensis (later changed to Pelusios seychellensis). The species was never again observed, however, leading researchers to assume that it had gone extinct. But new molecular evidence suggests the species never existed in the first place.

Taxonomic confusion accompanied P. seychellensis from its very introduction to science. Its validity as a separate species was first questioned by Siebenrock himself. As he made his original observations of Brauer’s specimens, he commented on their striking morphological similarity to...

After Bour published his report, researchers scoured Mahé for more evidence of P. seychellensis, but when they failed to locate any animals, the species was presumed extinct.

To put the matter to bed, Richard Gemel, a curator at the Natural History Museum in Vienna, Austria, where one of Brauer’s P. seychellensis specimens is now kept, invited herpetologist Uwe Fritz to study its genome. A few years earlier, Fritz had cataloged all the extant species of the Pelusios genus, and he remained “curious about the extinct species,” he says, so he jumped at the opportunity. He traveled to Vienna from the Museum of Zoology in Dresden, Germany, and extracted dried muscle tissue from the turtle’s thigh, then purified its DNA and compared three mitochondrial genes with the known sequences of other Pelusios species. The results suggest that P. seychellensis was not a different species from P. castaneus after all.

Fritz suspects that the specimens were simply mislabeled with regard to where they were collected. In addition to the genetic evidence that the species are one and the same, two of the specimens supposedly collected by Brauer had holes drilled in the sides of their shells, a common technique used to tie turtles together when bringing them to market. “This suggests that these terrapins were not collected by Brauer, but rather bought somewhere,” Fritz says. 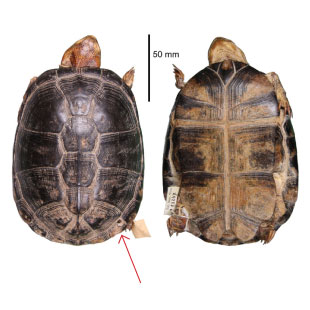 SHELL GAME: Dorsal and ventral views of the type specimen of Pelusios seychellensis. The hole drilled in the shell margin (arrow) may have been used for tying turtles together to be sold at markets for food.NATURAL HISTORY MUSEUM VIENNAIt’s possible that the Brauer himself mislabeled them, or more likely, Fritz says, that the mix-up could have happened at the Hamburg museum. “All the turtles of this genus are brownish in color,” he says. “If you are not an expert in these terrapins, you can easily confuse the different species.” Unfortunately, the museum’s “catalogs were lost during the Second World War, [so] it’s impossible to reconstruct what might have happened,” he says. “The more important issue is that we know now that there is one extinct species less on earth.”

But not everyone is convinced. “It is not the end of the story,” says Justin Gerlach, the scientific coordinator of the Nature Protection Trust of Seychelles, in an e-mail to The Scientist. “Those three specimens are similar to Pelusios castaneus, but are still morphologically distinct.”

Sara Rocha, an evolutionary biologist at the Portugal research center CIBIO (Centro de Investigação em Biodiversidade e Recursos Genéticos) who does field work in the Seychelles, agrees that there are still some questions surrounding the specimens. It’s possible, she says, that the turtles were introduced to the Seychelles by the early settlers of the region, and had not diverged significantly from the populations in West Africa at the time they were collected from the archipelago. The genes the researchers investigated may not be variable enough to detect small frequency changes in the island dwellers’ genomes, Rocha says. To truly know if the species are distinct, “you would really need to have . . . very variable molecular markers and population data,” she says. Unfortunately, with only three known specimens of P. seychellensis, that’s probably not possible, she adds. “I think it will remain a mystery.”