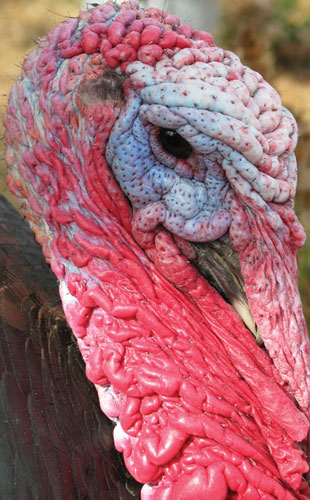 TOP TURKEY: A dominant tom develops striking secondary sexual characteristics, such as a bright, fleshy head and snood.© CREATIVEX/ISTOCKPHOTO.COMWith only a two-month window to court and mate with as many hens as he can, a dominant male wild turkey has his work cut out for him. Thankfully, one of his brothers often pitches in, helping to attract females and ward off potential competition from rival male pairs. But so long as a flock’s alpha male is alive, what his subordinate sibling won’t do is copulate with a single female bird. Establishing this pecking order in the first place requires a hard-fought battle, but one that results in a better chance at evolutionary success for both brothers. When they work as a team, related toms pass on shared genetic material to, on average, approximately six more offspring throughout their lifetimes than if either had tried to go it...

Having worked with wild turkeys nearly all her life, Victoria Roberts knows the male birds’ aggressive-turned-cooperative courtship rituals well. Most often, one bird eventually falls into line. While rare, the dominance battles between male birds can turn deadly. “When neither one of them wants to back down, that’s when they can have real, real fights—they can actually kill,” says Roberts, a poultry veterinarian from Yorkshire, U.K. “So being able to be submissive is actually lifesaving.”

University College London’s Judith Mank had been investigating differences in gene expression between sexually dimorphic phenotypes in several avian species when she first learned about the behavioral differences between dominant and subordinate male wild turkeys. Intrigued by the social arrangement, she and her colleagues decided to probe gene-expression differences between the dominant and subordinate male morphs, which have different coloration and mating behaviors. Both fan their tail feathers and drop their wings, but only dominant toms gobble and strut to attract female attention. By considering gene expression differences between the two male morphs, as well as between toms and hens, the researchers conducted a comparative genetics study that gave “a much more dynamic picture,” Mank says.

For such a study, domesticated turkeys, which have been bred to maximize food production and do not exhibit natural behaviors, wouldn’t do. But wild game birds reared in controlled conditions are hard to come by. So she called in a favor from Geoff Parker of the University of Liverpool. Parker, a noted evolutionary biologist, also breeds champion chickens in his spare time. “Geoff knows everybody in the world that breeds birds,” says Mank. Parker pointed her to Roberts, who supplied spleen and gonad tissue samples from young wild turkeys obtained in the breeding season of their first reproductive year, once dominance had been established. 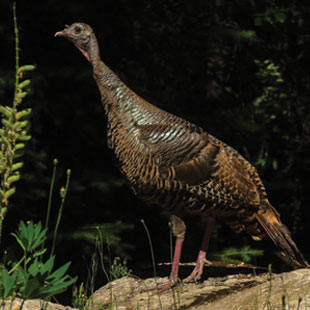 HEN: Female turkeys, like subordinate males, are drabber than dominant toms.© RONSAN4D/ISTOCKPHOTO.COM“When we started the study, I thought that there would be one or two genes that were different between dominant and subordinate males, and these were key genes that were expressed differently . . . leading to the huge difference in phenotype,” says Mank’s collaborator Marie Pointer, an evolutionary biologist and postdoctoral researcher at the University of Oxford.

But that was not the case. Comparing transcriptome sequences from the alpha males and their brothers, Pointer, Mank, and their colleagues found that subordinate male turkeys expressed fewer male-biased genes and more female-biased genes across the majority of the genome. This suggested to the researchers that the overall degree of sexual dimorphism observed between alpha males and their subordinate counterparts may be a result of subtle changes in the magnitude of sex-biased transcription across thousands of genes (PLOS Genetics, 9:e1003697, 2013).

“This is a great example of how differences among individuals are not exclusively determined by differences in DNA sequence,” says Alan Krakauer, a biologist at the University of California, Davis, who was not involved in the work. “Behavior and the social environment are probably responsible for the transcriptome differences they found. It’s not all ‘inside, out’—there’s a lot of feedback between what’s going on outside the organism and what’s going on under the skin.”

Behavior and social environment may have an even greater effect on the male turkey’s phenotype than his genes do. When the dominant male turkey dies, his subordinate sibling quickly takes his place as the head tom in the flock. The subordinate male turkey’s ability to adapt to change may well be an effect of transcriptional plasticity.

Plasticity in gene expression could also hold true for female turkeys, and in other species, with male and female showing masculinized and feminized gene expression to varying degrees, and with varying effects on their fitness.

“Until [a given] species figures out how to partition expression so that there’s female-specific expression and then there’s male-specific expression, both sexes can be dragged down quite a bit,” says Minyoung Wyman, an evolutionary biologist and postdoctoral researcher at Columbia University who was not involved in the study. “Figuring out how this works, mechanistically, is still, in my mind, a pretty open question.”