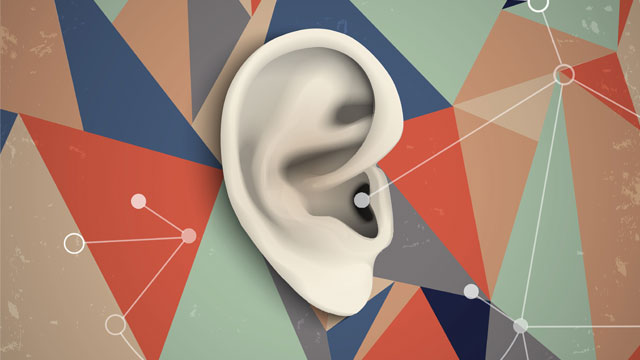 Imagine a continuous ringing in your ears that you know will probably never stop. Or, imagine you are one of the 360 million people worldwide who are losing their hearing. Now consider the many ways those changes will affect your life. Do you see any upsides? This is the bold question Vinaya Manchaiah, an audiology researcher at Lamar University in Beaumont, Texas, has been asking patients with hearing loss and other related impairments for several years. It’s a question, he says, that has real clinical value, and daring to ask it may possibly lead to positive effects.

Manchaiah is aware of the counterintuitive nature of his research. He says the first question doctors ask their patients is, “What’s the problem?” not “What are the benefits of the problem?” Even Manchaiah was skeptical when he was a PhD student at Linköping University in Sweden and his advisor,...

In 2004, using questionnaires, Stephens found that nearly half of family members surveyed, especially children and grandchildren, reported one or more positive effects resulting from their loved one’s hearing impairment, including improved communication skills and being able to do noisy activities without their hearing (Audiological Medicine, 2:134-38, 2004). Stephens wanted to find quantitative ways to study such experiences and their clinical effects. “When I heard this in the beginning, I thought it was a really strange idea,” says Manchaiah.

Manchaiah became convinced that this was a worthwhile research topic only after spending some time at hearing-loss support group meetings, where he saw that often the most well-adjusted patients were those who reported positive experiences as simple as using their declining hearing as an excuse to pretend not to hear someone speaking to them. “When I go and talk to people in that setting, they’re a lot more open to talking about these things.”

Manchaiah worked with Stephens to catalogue positive experiences among patients with Ménière’s disease, an inner-ear disorder that causes random episodes of vertigo, ringing in the ears, and hearing loss. Since completing his doctorate in 2013, he has worked with others to extend the project—which includes interviewing patients’ significant others—into hearing loss and other balance disorders (Int J Audiol, 53:285-86, 2014).

Last year, Manchaiah says, he decided the time was ripe to assemble a systematic review of positive experiences related to Ménière’s, hearing loss, and tinnitus, an intermittent or constant, often permanent, high-pitched ringing in the ear. The studies included in the review reported that, on average, patients experienced 2.3 benefits, including extrinsic ones, such as a more active social life because of support groups and foundations, and intrinsic effects, such as a sense of personal growth or increased empathy for others (Int J Audiol, 54:1-10, 2015).

“Initially it was all intended to explore what people have reported,” says Manchaiah. But as he brought the data together, he saw the value in determining how a patient is doing by some clinical measures as well: people with Ménière’s disease who report positive experiences, for example, also tend to have higher quality of life and are better adjusted to the disease.

Manchaiah says that asking about positive experiences can help gauge whether patients have accepted and adjusted to their hearing deficiency. Because these types of impairments are life-long, he says, “the large proportion of patient management is psychological,” and it includes confidence and coping strategies supplied by one’s doctor. “It’s important for [patients] to understand what things they can change and what things they can’t change.”

The link between positive thinking and clinical outcomes is not unheard of in other diseases. For example, the number of positive experiences reported by patients with multiple sclerosis correlated with fewer symptoms of depression in a 2008 study (J Holist Nurs, 26:41-48), and heart attack survivors who could cite upsides of the attack within several weeks were less likely to experience another within an eight year follow-up period (J Consult Clin Psychol, 55:29-35, 1987).

When Manchaiah presents his findings to doctors or hearing-loss foundation audiences, he says “in the beginning of the presentation, everybody looks at me strangely,” but eventually they realize they’ve seen these effects firsthand. As a clinician who sees patients with tinnitus, Cambridge University Hospitals’ David Baguley has amassed a lot of anecdotal evidence that patients who are able to find a silver lining to their disease have a better quality of life and are less likely to succumb to comorbidities such as depression and anxiety. “Very often they can feel as if their life is slipping away from them,” he says.

Baguley was happy to coauthor the review with Manchaiah to bring some hard data to the attention of other clinicians. Although their analysis found that associations between positive experiences and increased quality of life have thus far only been reported for Ménière’s, Baguley says it still “fits very well with the observations I’ve made over the last 30 years. Some patients will find that experiences with hearing loss, and tinnitus in particular, are a stimulus for growth. People will say, ‘I always wish it hadn’t happened to me, but in a way, I’m a stronger, kinder person because of that.’”

Manchaiah says he’d like to extend those correlative studies to include hearing loss and tinnitus, and also find out whether there are ways that doctors can encourage positive thinking and hence any clinical benefits that go along with it. According to the review, when asked open-ended questions about their positive experiences, only 40 to 45 percent of the respondents in the studies wrote of any, but that number surpassed 90 percent when surveys contained more-structured questions. If given the explicit option of reporting positive experiences, he says, most people will agree there is at least one benefit to their situation, and he plans to study whether just being asked by their doctor to consider the upsides to their hearing loss could impact quality of life, acceptance, and other outcomes.

“I think it could guide our work with patients in these areas and look at how we can build upon their resilience and try to help them improve and grow in these circumstances,” says Baguley.