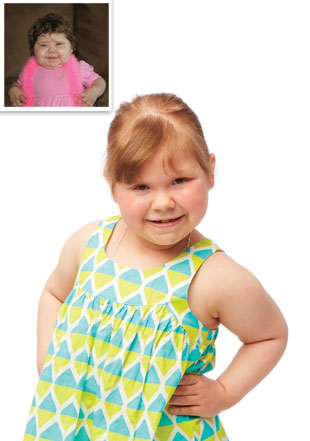 BEFORE & AFTER: Brygette as a toddler (inset) shortly after her IBD was diagnosed. Four years after treatment, Brygette is now a sassy six year old (above).COURTESY OF PENNY LAMBERTWithin a few days of birth, Brygette Park began having intestinal problems that worsened over the course of two weeks. By the time her parents took her to specialists at the Hospital for Sick Children in Toronto when she was a few months old, she was vomiting and having bloody diarrhea 20 to 30 times a day. Recurring fevers and rheumatoid arthritis plagued her, and she didn’t respond to conventional treatments for inflammatory bowel disease (IBD). Despite countless tests, her doctors were stumped. “I knew it had to be something rare, because they did tests—everything was negative,” says Park’s mother, Penny Lambert. “This is Sick Kids [the top-ranked hospital’s affectionate nickname] in Toronto and they’re stumped.”

Just before Park’s second birthday, her doctors learned that recently discovered defects in interleukin-10 receptor genes (IL10RA and IL10RB) are associated with inflammatory bowel disease in very young infants (N Engl J Med, 361:2033-45, 2009). Interleukin-10 normally keeps the body’s immune response from going overboard. Researchers had also found that young IBD sufferers carrying the mutations could be treated with a bone-marrow transplant. Park tested positive for the gene defect, and her parents decided to try the transplant, despite the extreme risks.

“We didn’t expect Brygette to make it,” says Lambert. “They said it was a 50-50 chance she would survive, her GI tract was so bad.” Within days of the procedure, performed in July 2010, Brygette “perked up and started eating,” says Lambert. Now six years old, she has some lingering health issues, but is an otherwise thriving, active first-grader.

Aleixo Muise, a Sick Kids gastroenterologist who treated Park, was intrigued by the genetic cause of her disease and began studying genetic defects in young children with very early onset IBD (VEOIBD). He opened a clinic to treat such patients at Sick Kids and set up an international collaboration, the interNational Early Onset Paediatric IBD Cohort Study (NEOPICS), which includes more than a hundred sites around the world. “These kids were unique and understudied,” says Muise. “To understand such a rare disease, you need a big network.”

Sick Kids sees about a dozen cases of VEOIBD every year, but the hospitals involved in NEOPICS now have a pool of about a thousand children they can study. About 60 children worldwide have been diagnosed with genetic defects in IL10R, including the same mutation carried by Park. “If you get these [certain IBD] symptoms at this [very young] age, it’s likely this defect,” says Muise.

The cause of most VEOIBD cases, however, isn’t known, but researchers are uncovering defects in other genes. Earlier this year, in a newborn girl with a severe case of VEOIBD, Muise and his colleagues found a mutation in the gene TTC7A (Gastroenterology, 146:1028-39, 2014). The child had severe intestinal sloughing and showed signs of immunodeficiency, a common symptom in IBD. She tested negative for mutations in IL10R, but the severity and sudden onset of her symptoms made Muise suspect that another point mutation might be responsible. His team sequenced the infant’s DNA using whole-exome sequencing, which focuses only on protein-coding regions—just one percent of human genome. They found a genetic mutation in TTC7A carried by both her parents.

As her first birthday approached, and before the research team could decipher the gene’s function, the infant died of respiratory failure, having lived most of her life in the hospital. An autopsy revealed she had “severe apoptotic enterocolitis,” a condition in which the cells lining her intestinal crypts exploded and sloughed away. It resembles graft-versus-host disease—the rejection of foreign tissue transplants.

Muise’s colleagues screened 40 more patients from NEOPICS institutions for the TTC7A mutation and found four others who had mutations—a brother and sister in Germany and two sisters in Iran—all of whom had the same severe apoptotic enterocolitis. Three of the infants died before they were a year old, and the surviving child is fed intravenously to manage her illness.

“They found a gene that hadn’t been implicated before in early onset inflammatory bowel disease,” says pathologist and immunologist Thaddeus Stappenbeck of the Washington University School of Medicine in St. Louis. “The bigger question is, how prevalent is this gene?”

These rare single-gene defect studies may in fact help explain the genetic component behind adult IBD and suggest possible treatments. “Unique IBD phenotypes, while they may not be generalizable or representative of the entire IBD population, can yield insight into variants that could be causal and could then [help] develop novel therapies,” says Ashwin Ananthakrishnan of Massachusetts General Hospital.

Despite the tragic outcomes of the earliest-diagnosed cases of children with mutations in TTC7A, Muise says he’s hopeful that these patients may one day be able to recover as well as Brygette Park has. Muise also pointed to a recent case, the sibling of another child diagnosed with the IL10R defect. She was screened at birth for the defect and got on the bone-marrow recipient list even before she had any symptoms of IBD. She’s slated to have a bone-marrow transplant this spring, and although she’s showing some early signs of IBD, she may avoid the years of pain Park endured.