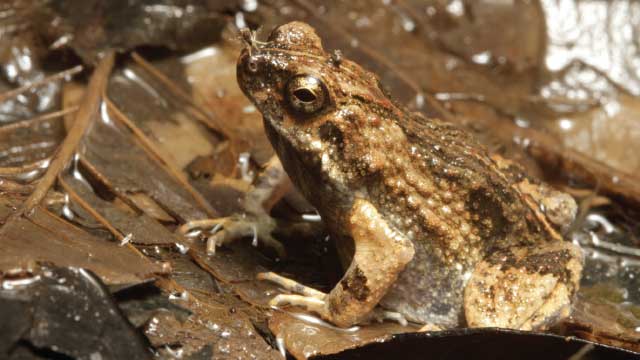 SHOO FLY: Biting midges (here) swarm the noses of túngara frogs (Engystomops pustulosus) during the breeding season, keying in on the mating calls that males emit to attract females (below).XIMENA BERNALCommunication coded for a particular kind of recipient is usually considered privileged information. But sometimes signals from a sender can also have multiple unintended receivers.

Take the túngara frog (Engystomops pustulosus). During the breeding season, males gather in ponds and puddles throughout Central and South America and call to attract females of their own species. Also listening: predators and parasites.

Research beginning in the 1980s has demonstrated how frog-eating bats use the calls of male túngara frogs to home in on the animals. The bloodsucking flies that feed on frogs, however, were just a scientific footnote until Purdue University biologist Ximena Bernal set her sights on them. According to Bernal, shifting her focus...

In 2002, Bernal was working on how male and female túngaras perceive mating calls for her PhD in Michael Ryan’s laboratory at the University of Texas at Austin. While observing calling males in the field in Panama, she noticed they were swiping at their faces with their legs. At first, Bernal thought it was a visual signal to potential mates—a kind of dance to accompany their song. Then she played a video of the behavior on a big screen and realized the frogs were attempting to swat away tiny flies. 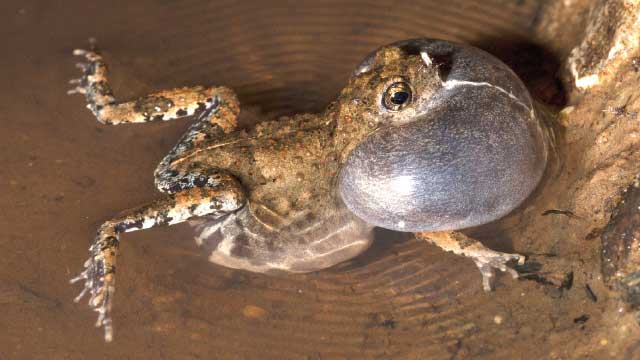 Bernal, who is also a research associate at the Smithsonian Tropical Research Institute, says the flies fascinated her. These “frog-biting midges” (family Corethrellidae) are about the size of fruit flies, but slimmer. Like their relatives, mosquitoes, females feed on blood. Unlike mosquitoes, which use chemical cues to find victims, the midges use the frogs’ mating calls to locate essential blood meals.

“Although there was a report that these midges use sound to locate and feed on frogs, Ximena made the first scientifically rigorous study of this phenomenon,” says Ronald Hoy, who studies neurobiology and behavior at Cornell University.

Male frogs appear visibly annoyed by the bloodsucking flies, spending valuable energy swatting at them. But the consequences could be even more dire. Bernal’s research has shown that male túngara frogs are much more likely than females to be infected with trypanosomes, a kind of blood parasite transmitted to vertebrates by a variety of blood-feeding invertebrate species. It is likely that frog-biting midges are the vectors of these parasites, and because females do not call, they do not attract the midges. Bernal suspects that infection negatively impacts the male frogs, and she is currently studying the interaction between flies, frogs, and parasites.

In further experiments, Bernal placed insect traps over caged, singing male frogs to explore how flies responded to live, rather than recorded, sounds. She found that flies, much like frog-eating bats, were most attracted to males calling at higher rates or making more-complex calls (Ethology, doi:10.1111/eth.12452, 2016).

“When males are thinking about attracting females, making their calls more complex might help. But it also increases their chances of getting eaten by a bat or being targeted by bloodsucking flies,” says Bernal. “Both bats and flies are eavesdroppers, curtailing signal complexity in the túngara frog.”

Bernal’s experiments have ruled out other potential cues used by the flies to locate a host, such as carbon dioxide emitted by the frogs (J Vector Ecol, 40:122-28, 2015). She placed insect traps over speakers that were either silent or broadcasting frog calls and determined the number of midges attracted when carbon dioxide was also added. Very few midges were attracted to the silent traps, whether or not carbon dioxide was present. And adding carbon dioxide to the speakers playing frog calls did not increase the traps’ attractiveness. It turns out that the frog’s mating call is all that is necessary to attract blood-hungry midges.

To better understand the evolution of this opportunistic eavesdropping, Bernal looked at how frog-biting midges use sound in a different context: mating. She recorded the sounds of the flies’ wing beats in a naturally forming mating swarm and in individually tethered males and females (Anim Behav, 103:45-51, 2015).

“When males and females were close together, they would change the speed at which they fly and then match the frequencies of their upper harmonics before copulating in mid-air,” says Bernal. “It’s like a love song.”

The wing beats of midges cover a large frequency range, from about 0.5 to 5 kHz, matching the frequency range of calls produced by túngara frogs. Bernal hypothesizes that the flies first evolved the ability to use sound in mating and then co-opted that ability in order to eavesdrop on frogs. She’s currently looking at the more than 100 species of frog-biting midges to see which ones depend on sound for mating and when the ability to hear such high frequencies likely evolved.

Another piece of the puzzle is how these flies hear. Bernal is collaborating with Hoy and Ronald Miles of Binghamton University in New York to investigate how the midges’ antennae respond to sound. So far, the data indicate that their antennae are very sensitive to a broad range of frequencies and seem to be able to sense sounds from several meters away. Bernal and her collaborators are also exploring the possibility that frog-biting midges have a tympanic ear. They have found what could be a tympanic ear on the fly’s thorax and are currently performing experiments to determine whether it vibrates at the relevant frequencies to sense fly wing beats and frog calls.

“Dr. Bernal has made many impressive contributions to the fields of behavioral ecology, insect biology, ecology, and evolution,” says T. Ulmar Grafe, a biologist at the University Brunei Darussalam. He cites her work as the inspiration behind his efforts to look for frog-biting midges in Borneo, where he has discovered eight new species.

“Ximena started with this really cool observation that these midges suck blood out of túngara frogs’ noses, and she has just run with it,” says Mark Bee, who studies frog communication at the University of Minnesota. “Her work highlights this idea that there are illegitimate, or unintended, receivers in communication systems; that is, animals you wish did not perceive your signal.”

“The problem is, if you put a signal out into the air, it’s there for anyone who can hear it,” says Hoy. “What’s remarkable about the frog-biting midge is that it eavesdrops across the invertebrate-vertebrate barrier. They have hijacked the song of a frog.”

For something that started as a side project when she was a graduate student, frog-biting midges have proved to be a fruitful subject for Bernal. “This system reveals the complex and intriguing ways that nature works,” she says. “It shows that we cannot study animals in isolation. We have to take into account their enemies, as well.”