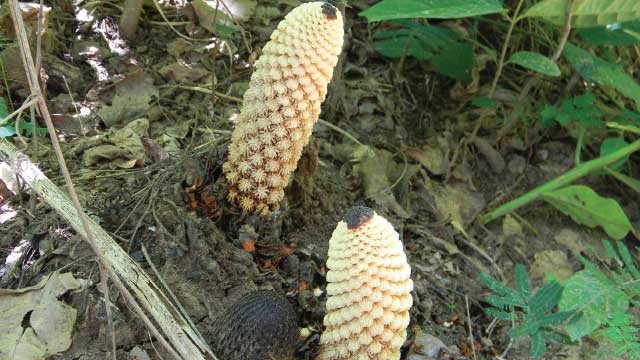 PRETTY LITTLE THIEF: The parasitic plant Lophophytum mirabile grows in the Amazon forest, sucking its nutrients (and some mitochondrial DNA) from the roots of other plants.HECTOR SATO

The mitochondrial genomes of land plants are big, bizarre, and often downright bewildering. Take, for instance, the massive, multichromosomal mitochondrial DNA of the sand catchfly (Silene conica), which, at 11.3 million bases, is larger than many bacterial genomes; or that of spikemoss (Selaginella moellendorffii), with its thousands of RNA editing sites and complete lack of genes for tRNAs. The peculiarities of plant mitochondrial genetics are multifarious enough to make it hard for any one to stand out—that is, until recently, when María Virginia Sanchez-Puerta of Argentina’s National University of Cuyo and colleagues sequenced the Lophophytum mirabile mitochondrial genome (New Phytol, doi:10.1111/nph.14361, 2016).

Lophophytum is a holoparasitic plant, meaning that it has forsaken photosynthesis and is...

Careful analysis of the Lophophytum mitochondrial genome sequence, which is about 820,000 base pairs long, revealed 56 genes (44 protein- or RNA-encoding genes, some in multiple copies), which is unremarkable. But what is remarkable about these genes is that at least 37 of them, including 35 protein-coding genes, were acquired via horizontal gene transfer from the plants that Lophophytum parasitizes. In other words, Lophophytum has swapped almost all its native mitochondrial genes for their foreign equivalents, which is a bit like replacing all the appliances in your kitchen with those from a neighbor­’s kitchen.

Horizontal gene transfer is not uncommon in parasitic plants like Lophophytum, which form vascular connections with their hosts, making it easy for them to pilfer water and nutrients. But this open flow from host to parasite also opens the door for the movement of DNA and even entire mitochondria. For instance, researchers recently showed that the holoparasitic plant Sapria himalayana acquired many nuclear and mitochondrial genes from its host Tetrastigma, a genus in the grape family. In Sapria, the foreign gene copies exist alongside native versions, whereas in Lophophytum, most of the native homologues of the horizontally acquired genes have been lost completely.

In addition to being a sponge for foreign DNA, the Lophophytum mitochondrial genome has an unusual architecture in that it is fragmented into 54 circular chromosomes ranging in size from about 7,000 to 58,000 base pairs­, which is in stark contrast to the simpler architecture of most animal mitochondrial DNA. What’s more, only 29 of Lophophytum’s mitochondrial chromosomes contain intact, known genes, raising the question: what are the functions, if any, of the other 25 chromosomes? Sanchez-Puerta and her coauthors hypothesized that these gene-less fragments of DNA might play a regulatory role, or might just be empty baggage. 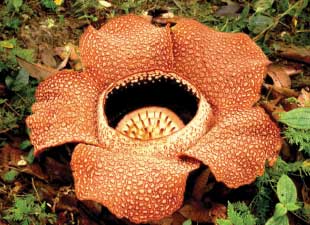 CORPSE FLOWER: Another parasitic plant, Rafflesia arnoldii, belongs to a genus that has been caught stealing genetic material from host plants.WIKIMEDIA COMMONS/ROD WADDINGTONFinally, a small fraction (0.6 percent) of the Lophophytum mitochondrial genome is made up of chloroplast-derived DNA. But, again, these chloroplast sequences appear to have been acquired from the host rather­ than from the Lophophytum chloroplast. In fact, not a single native chloroplast gene was found in the more than 6.5 billion base pairs of Lophophytum sequencing data, which was derived from total cellular DNA, suggesting that this parasite might have lost its own chloroplast genome outright. The complete forfeiting of plastid DNA is an extremely rare event, but it is believed to have occurred in the holoparasitic plant Rafflesia lagascae—which bears so-called “corpse flowers,” so named for their fly-attracting putridity—as well as in the nonphotosynthetic green alga Polytomella.

The past year has been a fruitful one for research on parasitic plants. In October, Claude dePamphilis’s lab at Penn State University uncovered numerous horizontally acquired genes in the nuclear genomes of parasitic members of the Orobanchaceae (broomrapes), once again illustrating a facility for gene transfer in parasitic plants. DePamphilis and his team have provided strong evidence that horizontal gene transfer plays a crucial role in the adaptation of parasitic plants, possibly helping them to feed on the juicy sugars of their hosts. Sanchez-Puerta and colleagues were open to the idea that the pilfered genes in Lophophytum might be benefiting the host-parasite relationship, but they also stressed that, rather than arising via natural selection, the foreign genes could have been acquired and fixed through random, nonadaptive processes and may not necessarily be providing any benefits. More genomic research on parasitic plants is sure to follow. Whatever future studies reveal, these nonphotosynthetic flowers certainly deserve their day in the sun.

—David Smith is an assistant professor of biology at the University of Western Ontario.