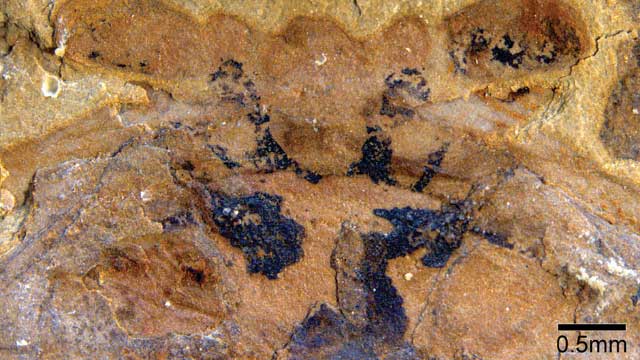 In 2002, Xiaoya Ma spent most of her days at Yunnan University in China freeing fossilized arthropods from their rocky tombs. Under a microscope, she scraped away sediment with a needle to reveal parts of the fossils that weren’t exposed during field collection. For one particular specimen, a wormlike arthropod ancestor called Paucipodia inermis, Ma saw some unusual shapes as she removed extraneous material from around the head—they resembled ganglia and nerve cords. “I didn’t initially realize what they were,” Ma says. “Slowly, slowly, it came to me that these might be brain structures.”

Little did she know, Ma was about to galvanize the field of neuropaleontology—the study of fossilized brains and their evolutionary context. Researchers had published brief descriptions of...

Neuroscientist Nicholas Strausfeld of the University of Arizona was writing a book on the evolution of the arthropod brain when he came across Ma’s paper. Modern arthropods have a brain composed of three parts, and Strausfeld hypothesized that this layout developed through the fusion of ganglia. “It was very important for me to find any evidence that ganglia arose early in evolutionary history,” he says. Strausfeld arranged to look at the P. inermis specimen with Ma while she was working on her PhD at the University of Leicester in the U.K. “It was fascinating,” he remembers.

Encouraged, Ma approached Strausfeld and Gregory Edgecombe, a paleontologist at the Natural History Museum in London, in 2009 about investigating other fossilized neural structures in more depth. “It was very risky because I didn’t have the fossils in my hand,” says Ma. “I hadn’t found them yet.”

The allure of fossilized neural tissues, says Edgecombe, is the value they bring to comparative studies. Estimates of arthropod species diversity are in the millions, making it the most diverse animal group in the world. Comparisons of early arthropod external structures, such as antennae or mandibles, can be derailed by the degree of specialization in the phylum—but those structures are innervated by the same basic circuitry. If a fossil has appendages matching those in living animals, researchers can infer more about their phylogeny without the neural information. But when it comes to early diverging arthropods, says Edgecombe, those specimens might not have the same body layouts, and researchers need more data to determine which structures are homologous. “Having access to fossilized brains can sort some of that stuff out,” he says.

To find other fossils with neural structures, Ma searched the published literature and combed through physical collections hoping to get lucky. She finally discovered a 2008 paper that identified a brain in a Cambrian shrimp-like arthropod called Fuxianhuia protensa. In 2012, Ma returned to Yunnan University with Strausfeld, hunting for that single piece of rock in the institution’s collections. On their last day there, Ma and Strausfeld tracked down the fossil. “I looked at it under the microscope and said, ‘Holy shit, this is the perfect brain, and it’s wonderful,’” Strausfeld says.

The team published a new description of the F. protensa fossil in 2012, dedicating the entire manuscript to the specimen’s brain (Nature, 490:258-61, 2012). The F. protensa nervous system closely resembled that of modern mandibulates, which include insects and crustaceans; these similarities, the researchers claimed, suggested that the key characteristics of the group’s nervous system developed much earlier than previously thought.

The paper incited the larger scientific community to comment on fossilized brains substantially for the first time—but not all of the attention was positive. A half hour after the paper was published, says Ma, she had already received an email from a few of her US colleagues. “They basically said, ‘It’s impossible for neural tissue to be preserved in fossils.’” She also received a mixed reception when presenting her results at conferences later in the year. “We got a lot of flak,” Strausfeld remembers.

Neural tissue fossilization was rare enough for skepticism to run rampant. “The reality of these collections is that 99 percent will not preserve the nervous system,” says Edgecombe. To get the nervous system to fossilize, animals have to be buried in a series of sediment layers that slowly compress their bodies. The sediment forces water out of the tissue layers and seals out oxygen, preventing most bacteria from decaying the organic material. If everything goes well, what remains is a dewatered, flattened specimen, with some soft tissues preserved as thin films of carbon.

But not everyone decried the research. In 2013 and 2014, paleontologists from China and Japan who suspected neural fossilization in their specimens approached Ma and Strausfeld. The teams collaborated to document the neuroanatomy of two specimens: a chelicerate, from the arthropod group including spiders and horseshoe crabs, and an anomalocarid, from an extinct line of arthropod relatives. Both studies demonstrated that the basic brain patterns found in today’s arthropods existed during the Cambrian, suggesting again that the brain’s origin is buried farther back in time (Nature, 502:364-67, 2013; Nature 513:538-42, 2014).

This growing body of literature prompted Javier Ortega-Hernández, a paleobiologist at the University Cambridge, to comb through collections at the Smithsonian Institution and the Royal Ontario Museum for fossilized neural tissue in 2014. “I thought their argument for identifying the brain, though I didn’t agree with every single interpretation, was convincing enough,” says Ortega-Hernández. “It really sold me on the idea that neural tissue could be preserved.” Ortega-Hernández published work in 2015 describing Helmetia expansa, a trilobite, and Odaraia alata, a crustacean, using fossilized brain tissue to clarify the evolution of their heads (Curr Biol, 25:1625-31, 2015).

Although the neuropaleontology field was developing, Ma felt she needed more evidence to support her work than she could obtain from descriptions of single fossils. In 2014, she returned to China and turned up 10 more F. protensa fossils, all showing neural tissues and resolving the position of the optic nerve. “We showed really solid evidence that multiple specimens preserved neural structures,” Ma says (Curr Biol, 25:2969-75, 2015). The group also conducted experiments to simulate fossilization in clay, demonstrating the mechanisms by which neural tissue can be retained (Philos Trans. R. Soc Lond Biol Sci, 370:doi:10.1098/rstb.2015.0286, 2015). They published both results last year—and Strausfeld thinks it’s made a difference. “People are beginning to accept that brains can fossilize.”

Ortega-Hernández agrees. “[Neural preservation] is exceptional and rare, but so are feathered dinosaurs,” he says. “There is no logical reason why it should be impossible.”