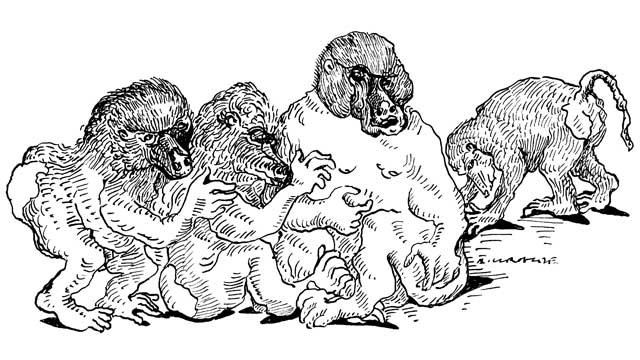 On the Kenyan savannah, with Mt. Kilimanjaro’s fragmented glaciers visible in the distance, baboons climb down from a scattered grove of trees to begin their day. Since the wee hours of the morning, a small team of field researchers has been waiting. Nearly every day for the past 40 years, scientists have shadowed these animals, scrutinizing not only their movements, but their eating habits, grooming behaviors, genital swellings, births, deaths, and sexual encounters.

Observers are given extensive training in keeping consistent and thorough records without disturbing the baboons (if you smile, don’t show your teeth; don’t wear red; don’t eat in front of them). “One of the things we’re very, very good at,” says Duke University’s Jenny Tung, who is an associate director of the Amboseli Baboon Research Project, “is collecting fecal samples.” The researchers have to be fast to swoop in and grab the poop...

Along with diet and kinship, the Amboseli project documents the social relationships among group members, giving the investigators the perfect opportunity to answer that question. Archie and a graduate student went into the field and, using Dixie cups, scooped up fresh fecal samples from 48 baboons. The baboons belonged to two different social groups, and, not surprisingly, each group had distinct microbiota. Because both groups ate pretty much the same things, diet probably didn’t explain the differences. So the team looked at grooming behaviors within groups. Controlling for diet and relatedness, the researchers found that animals that groomed each other had more-similar gut microbes than those that didn’t have such physical contact (eLife, 4:e05224, 2015).

This study delves beyond the assumption that it’s diet that’s driving much of the structuring in microbial gut communities in mammals. Instead, the work shows that interpersonal contact is a key component in sharing microbes.—Susan Lynch,
University of California, San Francisco

“It’s confirmation of a very long-standing hypothesis, but no one has been able to show it before,” says Andrew Moeller, a graduate student at Yale University who studies the evolution of primate microbiomes. The results back up the idea that social interactions help maintain diverse microbial communities over time. “If you think of one host, one lineage, parent to child, parent to child, with no social transmission, you’ll have a loss of organisms,” he says. “But once you have social transmission, those bottlenecks are completely erased.”

Archie is now asking what this sharing means to the life of the animal, and how changes in social dynamics affect the composition of baboons’ microbiomes. Her recent study on physical contact hinted that the differences between animals’ microbes have some functional consequences. “The technique we used allowed us to see not only what species were there but what genes those bacteria carry,” says Archie. “So we saw differences in the genic composition of [microbial assemblages within] social groups, suggesting they have different functions.”

“What I really liked about this study is that it delves beyond the assumption that it’s diet that’s driving much of the structuring in microbial gut communities in mammals,” says Susan Lynch, who studies the human microbiome at the University of California, San Francisco. Instead, the work “shows that interpersonal contact is a key component in sharing microbes.”

Lynch adds that some research in humans has investigated the role of person-to-person touch in determining microbial composition. One study, for instance, found that babies born by C-section have microbes at multiple sites in their bodies that are more similar to those on their mother’s skin, while babies born vaginally tend to have microbial communities most similar to their mother’s vaginal microbiome (PNAS, 107:11971-75, 2010).

The significance of microbial sharing among humans is not entirely clear—nor is the significance of losing physical contact and, therefore, not swapping bacteria. “For me, what I thought was really interesting were implications for modern society,” says Lynch. “We’re becoming increasingly virtual, and how much of that is changing microbial patterns, and how is that associated with disease or health status?”