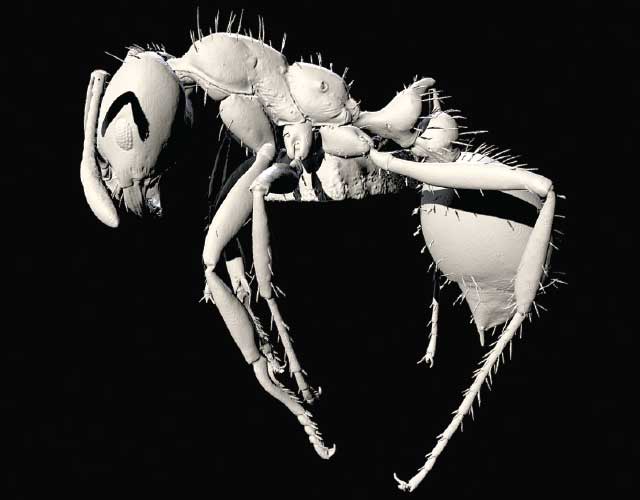 INVADER: 3-D model of a red imported fire ant (Solenopsis invicta), a species that has spread around the world from its native territory in South AmericaEVAN ECONOMO, OKINAWA INSTITUTE OF SCIENCE & TECHNOLOGY

In Hong Kong, some 1,300 skyscrapers butt up against rows of retail properties and restaurants. But because of conservation laws that mandate the preservation of 40 percent of the city’s land, lush parks break up the congested landscape. Someone or something seeking constant activity intermingled with green space would thrive here.

For the last 12 to 15 years, that perfect Hong Kong transplant has been the red imported fire ant (Solenopsis invicta), an invasive species native to South America.

“We’ve created the perfect environment for them,” says Benoit Guénard, an ecologist at Hong Kong University, who studies ant biodiversity.

The species invaded the United States in the late 1930s, but...

“If you let them establish the population,” Guénard says, “then you’ve essentially lost the battle.”

Guénard is an ant detective of sorts, separating out the “criminals” from the “good guys.” Since his arrival in Hong Kong more than two years ago, he and his research associates have spotted five invasive species and helped almost double the number of known native ones, from 170 to nearly 300. And he didn’t need to go far. Outside his campus office, his team found an entirely new species they named the golden tree ant (Asian Myrmecol, doi:10.20362/am.008016, 2016).

Another ant, it turned out, has also taken up residence on campus: red imported fire ants.

“You only find something when you start looking,” Guénard says. “And if you don’t have anyone looking for it, then, of course, you never know.”

If you let them establish the population, then you’ve essentially lost the battle.—Benoit Guénard, Hong Kong University

The French native has been tasked by Hong Kong’s Agriculture, Fisheries, and Conservation Department (AFCD) to map the distribution of the red ant, as well as other invasive and native ants, across the territory, and to study their effects on the local flora and fauna. So far, the spread is alarming.

Hot spots of fire ant activity on one map glow on a computer screen in his office. He points to various locations they have heavily colonized, including the Tsuen Wan and Kowloon districts. “Unfortunately, it’s pretty widespread,” he says. Hong Kong Island, home to the university, shows activity, too, though not as much—it is in the very early stages of invasion, he says.

Just outside Guénard’s office, a lab technician sits hunched over a dissecting microscope, sorting different ant species collected around Hong Kong International Airport. The red ant is there, as well as in residential areas and farmlands.

“At this point . . . I do not think eradication is on the table,” says Guénard, who plans to submit the full findings to the AFCD this spring. “[But] with the right type of management, we can suppress populations.”

Hong Kong’s fire ant colonies—some of which have been sighted and reported by the public—are handled using pesticides sprayed by whichever department manages the invaded patch of land. Comprehensive maps could inform a larger, coordinated effort to better track and control the ants, or, Guénard says, serve as a more immediate warning about where people should be careful. Fire ants are aggressive insects with nasty bites and stings that cause intense burning and blisters, and, in rare cases, anaphylaxis or even death.

Fire ants are also amazingly adaptive. One queen hitching a ride in a ship’s cargo hold is enough to start a new colony at its destination. The species favors setting up shop on manicured lands, underneath paved surfaces, and within electrical equipment. They can ruin crops and bully native insects and plants out of their homes.

Fire ants originated in areas of Argentina prone to flooding, so reestablishing themselves after disturbances comes easily to the insects. Photos and videos taken of fire ants forming floating islands during Hurricane Harvey in Texas illustrate just how resourceful they can be. Rafts of ants can attach to a tree and wait for flood waters to recede.
An ant colony functions as its own city, having at least one ruling queen (often more), worker ants to forage for food, and larvae to digest and regurgitate the food for the benefit of all parties. While many ant species will fight off rival colonies, fire ant colonies will join forces, making for a larger and more efficient group.

Those traits and that resilience allow them to be successful, Guénard says. “That is why understanding the ecology is important,” he says, “because if you can modify that or revert or limit those kinds of aspects, you’re putting yourself at an advantage.”

In Japan, fire ants have been sighted at 10 ports since May. The government’s response has been aggressive. Officials have beefed up monitoring at 68 ports, and pesticides were sprayed in the container yards at breached ports to eradicate the ants, says Shunya Hashiguchi of the Office for Alien Species Management in Japan’s Ministry of the Environment, in an email to The Scientist. So far, he says, all identified red fire ants have been killed.

“Not so many ants have been discovered outside of containers at the ports,” says Shigeto Dobata, an insect ecologist at Kyoto University. “So, I am optimistic about the eradication.” Pouncing on it this early, before they colonize, is critical, he adds.

More than 1,600 km south of Kyoto, Okinawa is prepping itself. The lab of Evan Economo, a biologist at the Okinawa Institute of Science and Technology (OIST), is helping the government devise a control plan for when the fiery arthropod arrives.

Pesticides have not yet been sprayed at Okinawa’s ports. Economo’s team and his colleagues helped convince officials to move forward with an intensive survey instead at Naha, one of the international ports on Okinawa. Because ongoing surveys at five of the ports hadn’t identified any fire ants, they didn’t believe the ants had made their way to the island, so pesticides weren’t necessary.

Early this summer, one evening after the Naha port closed, 510 bait traps were set every five meters over a grid in the international container areas. No fire ants were found, and now, every two weeks, researchers continue to collect ant samples from traps set around the entire island, in urban, agricultural, and forested areas, and bring them back to the lab to sift through and ID.

“We have been able to show that there are no signs of red ants on Okinawa yet,” Economo says. “But we’re trying to figure out how to make sure that we will detect it soon after it arrives.”

A step on the path to that goal involved going to fire ant–infested Taiwan to study the species and test detection methods. Ant data are powerful, but up until a few years ago, little existed.

To help fill that gap, Guénard and Economo launched antmaps.org, the world’s first interactive Google Maps–like ant database showing where species have invaded. “It’s reconstructing the tree of life of ants,” Economo says. “One big use of it is to see where ants have been spread around the world by humans, and then track them over time.”

The scientists reviewed more than 9,000 papers and went back 200 years to build the map, which is continually updated by Guénard as new data emerge. A recent analysis of the data they and others published in Nature Ecology and Evolution (doi:10.1038/s41559-017-0186, 2017) showed that the highest numbers of invasive species, including ants, mammals, and birds, exist on islands and in the coastal regions of continents. Those highly populated and economically developed areas and active trade posts create more opportunities for species, particularly ants, to be moved around by people and ships. Current measures to reduce the spread, the authors say, are not enough.

“Some of the species that are not here, but could come here, are a major problem,” Guénard says. “And some of them are even worse than the fire ant.”