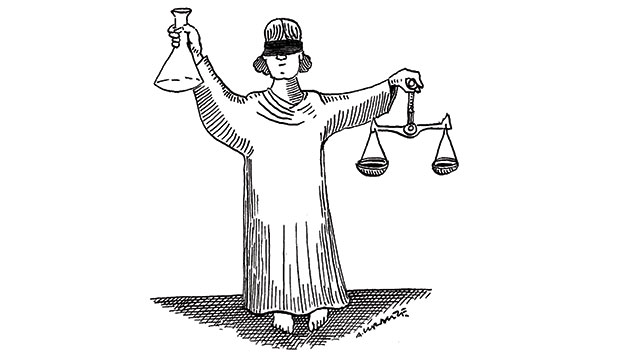 An expert in forensic chemistry, Niamh Nic Daéid is accustomed to presenting evidence in court—often for hours on end. “The longest time I’ve spent in the witness box is about seven hours,” says Nic Daéid, director of research at the University of Dundee’s Center for Anatomy and Human Identification (CAHID) in Scotland. Nevertheless, she says, “the thing that is most important is being able to clearly and accurately explain the meaning of the results of whatever tests have been done.”

Those results, which can pertain to evidence ranging from the fingerprints at a crime scene to the pattern of burn marks created by an explosive, can help push a trial verdict one way or the other. But ensuring that they are communicated properly can present challenges, even for experienced witnesses. Many judges, not to mention the lawyers and members of the jury in a UK courtroom,...

Such communication difficulties have long been a subject of discussion among the UK judiciary. In particular, Sir John Thomas, a judge who acted as Lord Chief Justice of England and Wales until last year, has advocated for better communication between scientists and the judges presiding over criminal cases, Black notes. After discussing the matter with Thomas, several science organizations came together in the early 2010s to develop explanatory documents, or primers, that would provide a plain-language grounding in the science being brought into the courtroom, along with an overview of the strengths and weaknesses of various types of scientific evidence. “It seemed a brilliant idea to us,” says Dame Jocelyn Bell Burnell, an astrophysicist and president of the Royal Society of Edinburgh, one of the organizations involved. Collaborating with the Royal Society of London and various members of the judiciary, “a joint project was set up,” she says. “And it rolled from there.”

There is a difference, often, between what is said and what is understood.—Dame Sue Black, University of Dundee

To get the project going, Black, Nic Daéid, and others set about developing the first two primers a few years ago. They selected two forensic approaches to focus on: DNA analysis and forensic gait analysis, a recently developed science of using aspects of locomotion to identify individuals from, say, security camera footage. These two disparate types of evidence were carefully chosen, explains Black. They “give the judges the opportunity to view the range of what a primer could do, from something that is very detailed, very well supported, and frequent in the courtroom, to something that is less frequent in the courtroom, has a [developing] scientific [basis],” she says. “It was about choosing the ends of a spectrum that allowed us to test whether the primer could cope at both extremes.”

Nic Daéid, along with Lady Justice Anne Rafferty, spearheaded the creation of the DNA analysis primer, which builds from biology basics such as “What is DNA?” to a review of the limitations of DNA profiling for mixed samples. “Technology has driven the development of DNA analysis such that we can get an awful lot more information out of a lot less sample,” Nic Daéid says. In some cases, this heightened sensitivity can counterintuitively make it more difficult to answer questions about who or where the DNA came from, she adds. “Those questions have always been asked, but now they’re being asked in a much more complicated environment because we have multiple DNA profiles in samples.”

Heading up the primer on gait analysis, meanwhile, was Black, along with Judge Mark Wall, Queen’s Counsel. Their document explains the techniques used to match footage of a person walking or running to a suspect in custody—for example, by comparing knee angles across images. Challenges include a reliance on generally low-quality footage and differences between the crime scene and the environment in which a suspect is later filmed for comparison. “I certainly walk differently whether I’m in flat shoes, flip-flops, or high heels; whether I’m walking on a cobble street or a flat road; whether I have a mobile phone in my hand or a shopping bag,” Black says. “There are so many variables to be taken into account . . . we have to be very cautious.”

Summarizing these complex issues in plain language was merely the first hurdle the primers had to clear before publication. Once drafted, the documents underwent multiple rounds of high-scrutiny peer review, Black says. All told, she notes, each document was assessed by around 40 scientists and members of the judiciary. “It was very important to us that the science was checked and double-checked,” explains Julie Maxton, a British lawyer and executive director of the Royal Society. “Then it went out to the judges to see if it was in a format that they would find useful. They came back with very detailed comments. That process took us probably about 18 months.”

This past November, the team published the primers on the Royal Society’s website, where they are free to download in full. “The reception has been amazingly positive,” says Bell Burnell, who has received feedback from various members of the judiciary. “Everyone that I’ve spoken to is enormously grateful to have this kind of thing, and think it’s a fantastic resource.” And while other countries have their own channels for discussion—the U.S., for example, has its Committee on Science, Technology, and the Law, which deals with issues affecting the scientific and legal communities—there’s been interest in using the primers abroad, too, Bell Burnell adds.

That’s not to say the team’s work in the U.K. is done. As Supreme Court Justice Lord Anthony Hughes, chair of the committee overseeing the primers’ development, noted in a press release accompanying the primers’ publication: “These are the first in a series of primers designed to be working tools for judges.” Another two primers are currently in the pipeline—one will cover statistical methods; the other will explain the physics of vehicle collisions. Maxton notes that committee members will meet this year to decide how to arrange annual reviews to keep the documents up-to-date, as well as how to more formally assess the impact of these primers in the courtroom. Although November’s launch represented a landmark for the project, “I think for all of us, it’s just one step on the road,” Maxton says. “What we really want to see is whether they’re useful to the judges. So I’m holding the champagne, as it were, until we know that they are.”