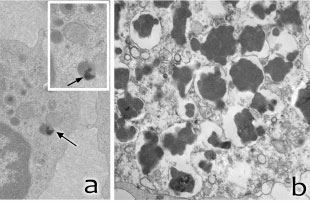 CHAPERONE PROBLEMS: One of the NCL patients Milen Velinov and colleagues studied had characteristic storage inclusions in peripheral lymphocytes (a). Another showed similar inclusions in cells throughout the central nervous system (b).DOI:10.1371/JOURNAL.PONE.0029729.G002Kufs disease type B, also called autosomal dominant adult neuronal ceroid lipofuscinosis (ANCL), is a particularly nefarious malady, even as neurodegenerative conditions go. Beginning in young adulthood, people with the disease develop dementia, difficulty with movement, and changes in personality. After a decade or so of cognitive decline, Kufs patients succumb, rarely making it to their 45th birthday.

Other forms of NCL even strike children, affecting about one in 12,500 globally. But the adult form of the disease is exceptionally rare, with fewer than 200 cases reported worldwide, says Milen Velinov, who treats patients with NCL at Albert Einstein College of Medicine and directs the Genetic Services program at the New York State Institute for Basic...

From genetic studies in recent years it had become clear that NCL is actually a cluster of diseases with different genetic roots, but “we did not have any idea what the gene of this condition [ANCL] is,” says Velinov. A few years ago, he and his colleagues set out to find the genetic culprits. Not knowing where to begin their search, they conducted whole-exome sequencing of genomic samples from three members of a family stricken by ANCL. Tragically, 10 members of the family, spanning five generations, suffered from the disease.

Coincidentally, three other groups of researchers were also on the genetic hunt, and around the same time they all converged upon the very same gene, DNAJC5 (PLOS ONE, doi:10.1371/journal.pone.0026741, 2011). Velinov could not have predicted that this particular gene would be to blame, but to others working on the molecular mechanisms of neurodegeneration, it suddenly made perfect sense.

It turns out that DNAJC5 encodes cysteine string protein-alpha (CSPα), a well known molecular chaperone that’s involved in maintaining the activity of neurons’ synaptic vesicles, cellular ferries for all-important neurotransmitters. For as rare as ANCL is, CSPα is abundant. “As far as we know, this protein is on every synaptic vesicle,” says molecular physiologist Alan Morgan of the University of Liverpool.

And people have been studying CSPα for years. “It was really bizarre,” says Tom Gillingwater of the University of Edinburgh. He had been studying CSPα and its role in general neuroprotective mechanisms when the papers on DNAJC5’s role in ANCL were published. It just so happened he had also worked on animal models of NCL, never knowing that the two research projects overlapped. “I was delighted to see that,” he says.

Gillingwater and others have shown that CSPα is implicated in a wide range of maladies involving synaptic problems. Stanford University’s Thomas Südhof, who won a Nobel Prize last year for his work on synaptic vesicles, helped recognize that a loss of CSPα contributes to neurodegeneration in mice.

Velinov says he’s delighted that a rare disease such as ANCL is garnering attention from multiple labs around the world. “This condition is unique, and finding this gene is fascinating because it connects two different lines of studies: the study of this protein as a chaperone with the study of ANCL,” he says.

Recently, Morgan’s group developed a C. elegans model of ANCL to find out if anything could rescue an animal that did not produce CSPα. The researchers knocked out the worm homolog of DNAJC5, which caused the animals to die prematurely. Screening chemicals to find those that could lengthen the worms’ life span turned up resveratrol, the fabled chemical found in red wine (Hum Mol Gen, doi:10.1093/hmg/ddu316, 2014). Although the molecule has previously been linked to neuroprotection, Morgan says, it’s unclear how it’s acting in C. elegans to extend life span in CSPα’s absence. One big debate surrounding resveratrol (other than whether regularly drinking red wine is beneficial in humans) is its mechanism; some have provided evidence that it activates a protein involved in longevity called Sirtuin 1. But Morgan’s group found that resveratrol acts independently of the worm homolog of Sirtuin 1 in his ANCL model. “There’s a pretty long list of alternative mechanisms, too,” says Morgan.