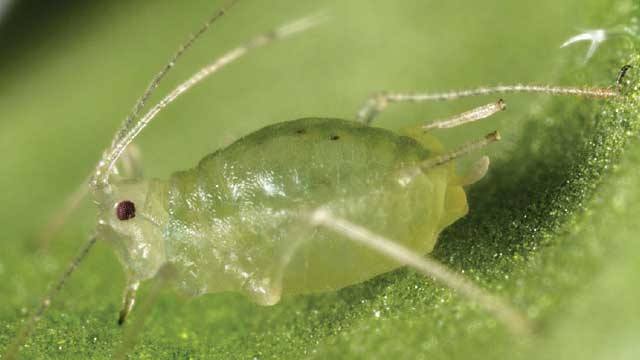 Aphids are some of nature’s most notorious pests. These tiny, sap-sucking insects munch on farmers’ crops, which causes physical damage and transmits pathogens that often render plants unsuitable for human consumption.

While most aphids are only able to colonize one or a few plant species, the green peach aphid (Myzus persicae) isn’t picky about its food. The polyphagous, or generalist, pest can feed on more than 100 species from around 40 different plant families. “Polyphagous insects always have a host somewhere, so they can keep going and can become massive pests,” says Saskia Hogenhout, a project leader in plant-biotic interactions at the John Innes Centre in the United Kingdom.

Green peach aphids are not the only polyphagous pests—others include spider mites and locusts. However, unlike many other generalists that only reproduce sexually, M. persicae also spawns clones in the spring. “So...

Asexual reproduction in aphids is also, coincidentally, a boon for experimenters, says Thomas Mathers, a postdoctoral scientist at the Earlham Institute in the United Kingdom. If researchers keep aphids constantly under springtime conditions, they will only reproduce clonally, providing a population of genetically homogenous specimens to study.

You could say that Myzus persicae is a true generalist in the sense that genetically identical individuals can go to different plant species.—Saskia Hogenhout
John Innes Centre

Hogenhout, Mathers, and colleagues recently set out to see what gave M. persicae its remarkable ability to colonize such a huge variety of plants. To do so, they first sequenced M. persicae’s genome and compared it to that of the pea aphid, Acyrthosiphon pisum, a specialist that only occupies a few host plant species.

Much to the authors’ surprise, A. pisum had a genome nearly double the size of M. persicae’s. “[This] is very surprising and counterintuitive,” says Chris Bass, a University of Exeter professor who was not involved in the work. “You might expect that this aphid, with its very large host range, has a larger complement of genes that might allow it to feed on a different number of hosts—but it looks like the opposite is actually the case.”

The group then investigated the transcriptional changes that occurred when M. persicae colonizes a new host. From this analysis, they found that gene expression changes in two gene families, cathepsin B and RR-2 cuticular protein, occurred rapidly—a mere two days after the aphids were transferred to a new plant host. When the researchers generated transgenic plants that could knock down cathepsin B gene expression in the insects, the aphids’ ability to survive and reproduce on a new host was significantly reduced.

The team also discovered that the genes involved in host-switching were older gene duplicates that arose during aphid evolution. “It was as if Myzus persicae was able to take pre-existing genetic diversity in the genome and then just fine-tune the expression of those genes to be able to colonize a new host, rather than having more duplicated genes to colonize these different plant species,” Mathers says.

“[This is] an important study because we do need to understand what makes a species a generalist or a specialist, what makes them able to switch to new hosts, and to predict whether they might become pests to other plant species,” says Julia Ferrari, a biologist at the University of York who was not part of the work.

Not only is M. persicae able to live and dine on multiple plant hosts, but it can also rapidly develop resistance to pesticides. “Understanding the genetic basis of resistance can be very useful in terms of trying to come up with strategies to slow, overcome, or prevent resistance emerging,” Bass says.

According to Hogenhout, it’s possible that the ability to transfer rapidly between hosts helps M. persicae develop resistance to pesticides as well. If a pesticide is applied to a crop, these aphids can quickly move away to another crop after only experiencing sublethal doses of pesticides. A few years ago, a group at Imperial College London reported evidence for this type of mechanism (Pest Manag Sci, 70:88-96, 2014). “It’s a bit like antibiotics. If you don’t finish your antibiotic treatment, you may generate resistant bacteria,” Hogenhout says. “If we can prevent the insects from moving away from the crop when insecticides or other control methods are being applied, then we can also maybe delay the time by which the insects can develop resistance.”

The group is now looking into the mechanisms that might be behind the green peach aphid’s changes in gene expression. “We found all the things that have changed, but we are right at the beginning of finding out how that really works—so what the transcription factors or the epigenetic mechanisms that underline this transition are,” Mathers says. “Maybe going after things relating to that might be most useful if you want to find something that you can target for stopping [these pests] from being so successful.”