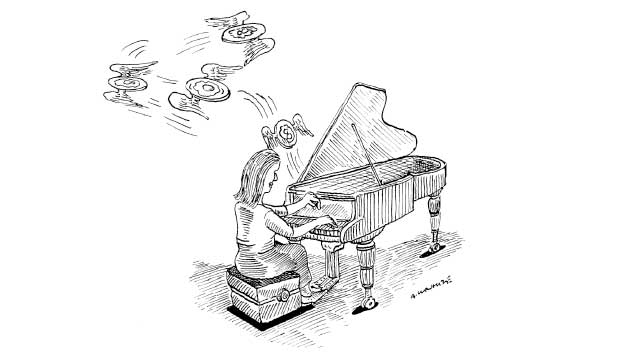 A few years ago, UK composer and technology reporter LJ Rich participated in a music technology competition as part of a project with the BBC. The 24-hour event brought together various musicians, and entailed staying awake into the wee hours trying to solve technical problems related to music. Late into the night, during a break from work, Rich thought of a way to keep people’s spirits up.

“At about four in the morning, I remember playing different tastes to people on a piano in the room we were working in,” she says. For instance, “to great amusement, during breakfast I played people the taste of eggs.”

It didn’t take long before Rich learned, for the first time, that food’s association with music was not as universally appreciated as she had assumed. “You realize everybody else doesn’t perceive the world that way,” she says. “For me, it was quite...

Rich had long known she had absolute pitch—the ability to identify a musical note, such as B flat, without any reference. But that night, she learned she also has what’s known as synesthesia, a little-understood mode of perception that links senses such as taste and hearing in unusual ways, and is thought to be present in around 4 percent of the general population.

It’s a difficult phenomenon to get to the bottom of. Like Rich, many synesthetes are unaware their perception is atypical; what’s more, detecting synesthesia usually relies on self-reported experiences—an obstacle for standardized testing. But a growing body of evidence suggests that Rich is far from being alone in possessing both absolute pitch and synesthesia. Some researchers are beginning to explore potential biological links between the traits, not only to gain insight into synesthesia itself, but as a window into how the brain develops a perception of the world in the first place.

“The two conditions seem superficially quite different,” says Psyche Loui, a psychologist and neuroscientist at Wesleyan University, adding that most synesthesia researchers focus on “grapheme-color” associations—the experience of seeing colors when reading words or numbers. “That’s a visual-to-visual association,” she says. “Absolute pitch is auditory. But when you think about them in general terms of perception, I think the fact that they might be related becomes more obvious.”

A few years ago, Loui, then at Harvard Medical School, and colleagues performed functional magnetic resonance imaging (fMRI) on 30 people with either absolute pitch or tone-color synesthesia—the association of specific sounds with colors—alongside 30 control participants. They found that, while listening to music, people with absolute pitch or synesthesia showed unusual neural activity, particularly in the superior temporal gyrus—a region involved in processing auditory information soon after it arrives at the brain (ICMPC, 618-23, 2012).

Her findings fit into a growing appreciation of neural connectivity’s role in a number of unusual modes of social and sensory perception, from autism to heightened musical sensitivity. “I suspect [absolute pitch] is one of many types of hyperconnectivity,” Loui says. “Synesthesia is another one, exceptional creativity may be a third. They could all be different manifestations of the same brain phenomenon.”

It’s a view shared by Elena Kowalsky and Peter Gregersen, researchers at the Feinstein Institute of Medical Research in Manhasset, New York, who are tackling the question of synesthesia’s biological basis from a genetic perspective. In 2013, their group found that, among 768 people with absolute pitch, around 20 percent also reported experiencing some form of synesthesia—usually the association of colors with particular notes or sounds.

A subsequent linkage analysis revealed that regions on at least two chromosomes showed associations with both traits, “strongly suggesting [the traits] have common genetics,” says Gregersen. “We think [synesthesia] is basically another manifestation of the same type of underlying brain connectivity, with a similar genetic basis” (Hum Mol Genet, 22:2097-104, 2013).

The Feinstein researchers are now resequencing regions common to both traits to identify the culpable genes. And they’ve highlighted some potential candidates, including EPHA7, a gene thought to influence neural connectivity in the developing brain.

The scientists are also collecting data from a specially designed cell phone app, PitchMatch!, which assesses users’ pitch-recognizing ability and uploads results online. Ideally, the tool will allow for a better estimate of the occurrence of heightened auditory perception in the general population, Gregersen says. And it could one day allow researchers to delve into more complex, unanswered questions about how synesthesia and absolute pitch arise: how genetic predisposition interacts with the environment, for example, and to what extent either of these traits can be learned or encouraged during development.

In the meantime, though, the study of traits such as absolute pitch and synesthesia continues to expand science’s understanding of how the brain builds a perception of reality. “I think we take it for granted that we all perceive the world in the same way,” notes Kowalsky. Exploring the range of humans’ experience of tastes, sights, and sounds “opens up this whole window into ‘What is perception?’” she says. “What does it mean to see the world through this different lens?”