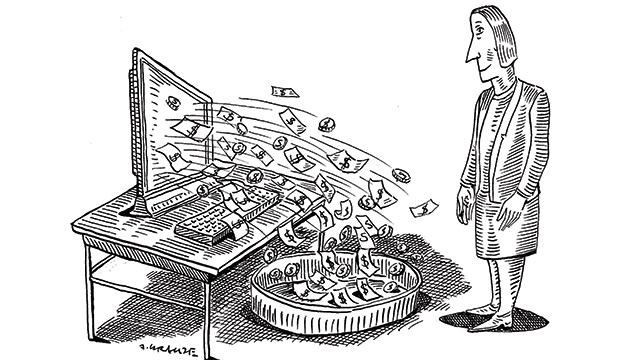 ANDRZEJ KRAUZEIt was a parent who first approached Romina Ortiz, the COO and vice president of patient advocacy at the Rare Genomics Institute (RGI), about crowdfunding. The mother of Maya Nieder, a developmentally disabled 4-year-old, was looking for a way to raise money for her daughter’s whole-exome sequencing, which reveals the intricacies of protein-coding genes (see “Answers in the Exome” here).

Ortiz had cofounded the nonprofit in 2011 to connect physicians, researchers, and rare-disease patients to laboratories that could conduct diagnostic genome sequencing, and to help scientists in those labs find funding. It wasn’t easy at first. “We by no means were experts at raising funds, so we really wanted to see how else we could help our [patients’] families,” says Ortiz. In 2012, the RGI managed to raise $3,550 through crowdfunding to sequence Nieder’s exome. The genetic results revealed that the child had a mutation...

Four of the 11 crowdfunding campaigns met their goals before the 30 days were up.

Although the cost of DNA sequencing has plummeted in the last decade, the price of an exome analysis—still in the thousands of dollars—remains out of reach for many families in the Nieders’ situation. And while some insurance companies now cover whole-exome sequencing, families are often left to find alternate sources of funding themselves. It’s becoming increasingly common for patients to turn to crowdfunding, raising money by gathering dozens of small donations to reach a goal in a set time frame, typically with the help of social media (see “Crowdfunding for a Cure” here). Now, more than 80 percent of the RGI’s patients who can’t obtain grant funding or insurance coverage take this approach.

Three years ago, to identify consistently successful crowdfunding strategies, Ortiz and her colleagues asked rare-diseaseadvocacy groups and genetic counselors to offer families in their client populations the opportunity to take part in an experiment. Of 86 initial respondents, 11 families committed to participate. The study’s requirements made it difficult to amass a larger cohort, Ortiz notes: participants had to want to use crowdfunding to pay for whole-exome sequencing for a child that has an undiagnosed, rare disease, and they had to have a physician’s referral for the analysis. “You can already imagine that population size is a little smaller,” she says. The researchers and participants agreed upon a crowdfunding goal of $5,000—the cost of whole-exome sequencing for one young patient and both parents—in 30 days.

The results after one month were revealing. Four of the 11 crowdfunding campaigns met their goals before the 30 days were up, and Ortiz says that participants who engaged in lots of preparation before the launch date were among the most successful (Interact J Med Res, 7:e3, 2018). These participants tended to be more involved with the RGI prior to starting the campaigns, requested resources, and kept in contact with the RGI, she adds. “We saw how they prepared. . . . They would send emails out to their networks before the launch date.” Some even organized in-person events as well, before officially launching their crowdfunding campaign.

Ortiz and her colleagues collected data about the participants’ social media engagement, measured by interactions with campaign-oriented Twitter and Facebook posts. They found that messages containing specific references to individual patients garnered more clicks than those tailored to general audiences. Information collected from donors via anonymous online surveys also provided insight into the factors that influenced people’s decision to give. “A lot of the donors were more likely to donate if they saw that a campaign was close to raising the amount of funds needed,” she says, adding that engaging donors with educational videos had a significant positive impact. And although 89 percent of donors said they heard about the campaigns via Facebook, contributions were higher when the donor learned about the campaign by word of mouth, email, or a phone call.

Nora Kenworthy, a sociomedical scientist at the University of Washington who was not involved in the work, tells The Scientist that there’s likely more to these results than participants’ preparedness, and points out that the RGI researchers failed to include potentially important factors in their analysis. “There’s an implicit message in this study that a lot of crowdfunding success boils down to effort and engagement,” she says. “I think that is a misrepresentation of the crowdfunding marketplace.” While effort definitely plays a role, Kenworthy notes that many other factors can influence campaign success, such as age, race, disease type, and even the attractiveness of a campaign’s photos. “I would love to see more research that looks at some of those intractable factors,” she says.

There’s also more to be explored regarding the long-term effects of crowdfunding medical costs on patients and on the broader healthcare landscape, says Valorie Crooks, a health geographer at Simon Fraser University in British Columbia who was not involved in the work. “There’s not been a lot of research regarding crowdfunding,” she tells The Scientist. “Meanwhile, this has become, in many ways, a widely popular social phenomenon.” One possible outcome is the exacerbation of existing disparities in access to healthcare, says Kenworthy. Crowdfunding has “normalized the idea that getting healthcare can be a competition . . . which really flies in the face of norms around equity and fairness and equal access to healthcare.”

There are other social and economic factors at play too—factors that raise a number of challenges from both ethical and equity perspectives in crowdfunding medical costs, says Crooks. “Campaigns that tend to be successful are not always, but often, coming from people who have some degree of social capital,” she notes. “They have the social network and resources that enable them to propel the campaign forward.” Some families may be less media-savvy, or lack the equipment necessary to create a video for their campaign. “That’s not within everyone’s capacity,” Crooks says. Ortiz adds that not everyone the RGI works with wants to use crowdfunding, and even among those who do, there’s substantial variation. “All families are different,” she says. “Some are more open to talking to their network, and others are a lot more private.”

Whatever one’s resources, preparing and executing a successful crowdfunding campaign can be “pretty intensive,” says Ortiz. “There are chronic, very significant medical costs and emotional tolls on the family. It is asking a lot to do a whole campaign.” In the long term, Ortiz hopes to reduce the need for crowdfunding in the first place. With this goal in mind, she has begun reaching out to companies that provide whole-exome sequencing to negotiate reduced prices. In 2016, the RGI “created a philanthropic program” with Illumina Inc.,  she tells The Scientist. “We’re actually offering it for free now.”