A handful of new studies moves the needle toward a consensus on the long-disputed question of whether insect wings evolved from legs or from the body wall, but the devil is in the details.

For more than a century, researchers have argued over the evolutionary origin of insect wings. Although many hypotheses have been proposed, biologists typically support one of two competing ideas: that wings evolved as an outgrowth from the tergum, a part of the body wall on an insect’s back, or that they originated in the pleura, the insect’s sides, which are themselves generally thought to be derived from ancestral leg segments. “[T]hese two schools of thought have been in an intellectual battle for decades,” Miami University evolutionary biologist Yoshi Tomoyasu tells The Scientist in an email. He calls the origin of wings “one of the major mysteries in biology.”

When PhD student Heather Bruce began a last-minute thesis project on crustacean leg segments, she had no idea that she was wading into this complicated and long-standing debate. It was 2016, and Bruce was working in Nipam Patel’s lab at the University of California, Berkeley, with a little shrimp-like critter called Parhyale hawaiensis, often used in developmental and genetics research. She’d set out to determine how the seven segments of each of the crustacean’s 14 locomotory legs matched up with the six segments that make up each of an insect’s six legs, to figure out which segments were homologous to which. Other researchers had previously attempted to use gene expression assays to align the leg segments of the four major arthropod groups (arachnids, crustaceans, insects, and millipedes and centipedes) and had produced somewhat ambiguous findings. Although Bruce hadn’t expected to have much more luck, her analyses using the lab’s new CRISPR techniques were supporting the idea that insects’ and crustaceans’ legs actually were homologous if you simply counted segments from the leg tips in toward the body.

But, Bruce wondered, what had happened to insects’ seventh leg segment—the one that made up the top part of the leg in Parhyale, and was presumably present in a common ancestor of crustaceans and insects? And, for that matter, what about the eighth leg segment found in some arthropods—and presumably in a common ancestor of the entire clade—but which neither Parhyale nor insects seem to have? Using genetic knockouts and gene expression imaging, Bruce found that Parhyale’s seventh leg segment, the one closest to its body, was in fact homologous to insect pleura, while the eighth leg segment of ancestral arthropods matched part of the tergum of both Parhyale and insects. The data supported an old hypothesis that ancestral crustacean leg segments had, over millions of years of evolution, become incorporated into the body wall in insects and some other arthropods.

What had hap­pened to insects’ seventh leg segment?

Realizing that the project might reveal insights into the insect wing debate, Bruce used fluorescent tags to visualize the expression of vestigial, a gene associated with wing development, in Parhyale and red flour beetles (Tribolium castaneum). She saw swipes of fluorescence in this incorporated eighth leg segment area in both animals, suggesting that this chunk of tissue was the evolutionary source of wings in insects, as well as of an outgrowth in Parhyale called the tergal plate. In other words, Bruce’s study supported the idea that insect wings had evolved as outgrowths of the tergum. 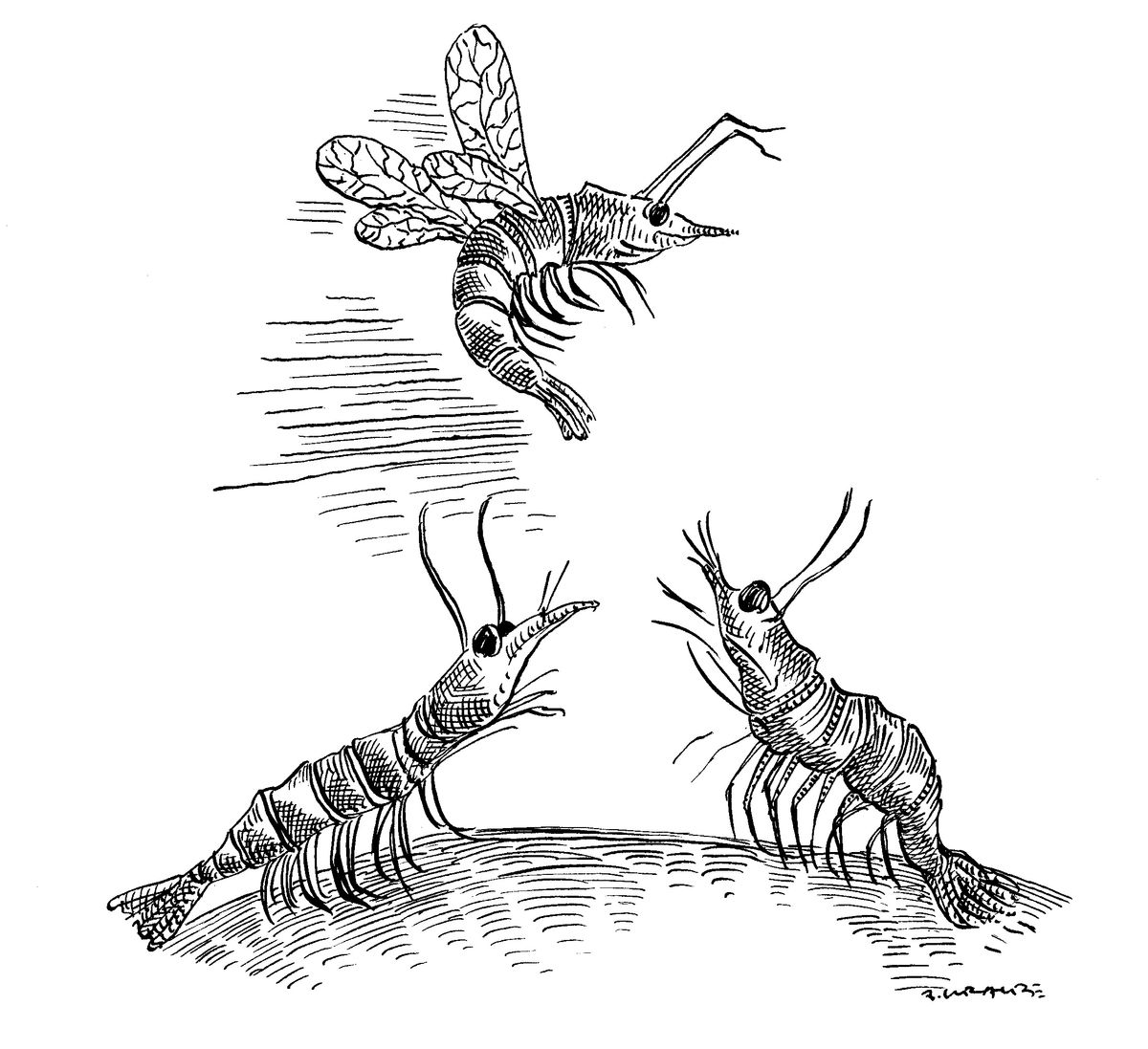 Century-old debates don’t get resolved in a day, of course, and in the same issue of Nature Ecology & Evolution where Bruce and Patel published these results, Tomoyasu and PhD student Courtney Clark-Hachtel put forward data that pointed to a different conclusion—namely, that wings evolved as outgrowths of both tergal and pleural tissues. Tomoyasu’s group had already published experiments in red flour beetles to support this idea, called the dual-origin hypothesis.  In the new work, the team gathered further evidence, this time in Parhyale. Using the same CRISPR techniques as Bruce—which Clark-Hachtel learned when she visited the Patel lab at UC Berkeley—Tomoyasu and Clark-Hachtel knocked out vestigial and other genes associated with insect wing development, and observed impaired development not only of the crustacean tergal plate but also of the lobed outgrowths on the crustacean’s seventh leg segment—the bit that appears to be homologous to insect pleura. Expression data backed up the idea that a gene network similar to the one involved in insect wing development “operates both in the crustacean terga and in the proximal leg segments, suggesting that . . . both of these tissues qualify as potential crustacean wing homologues,” they wrote in the paper. 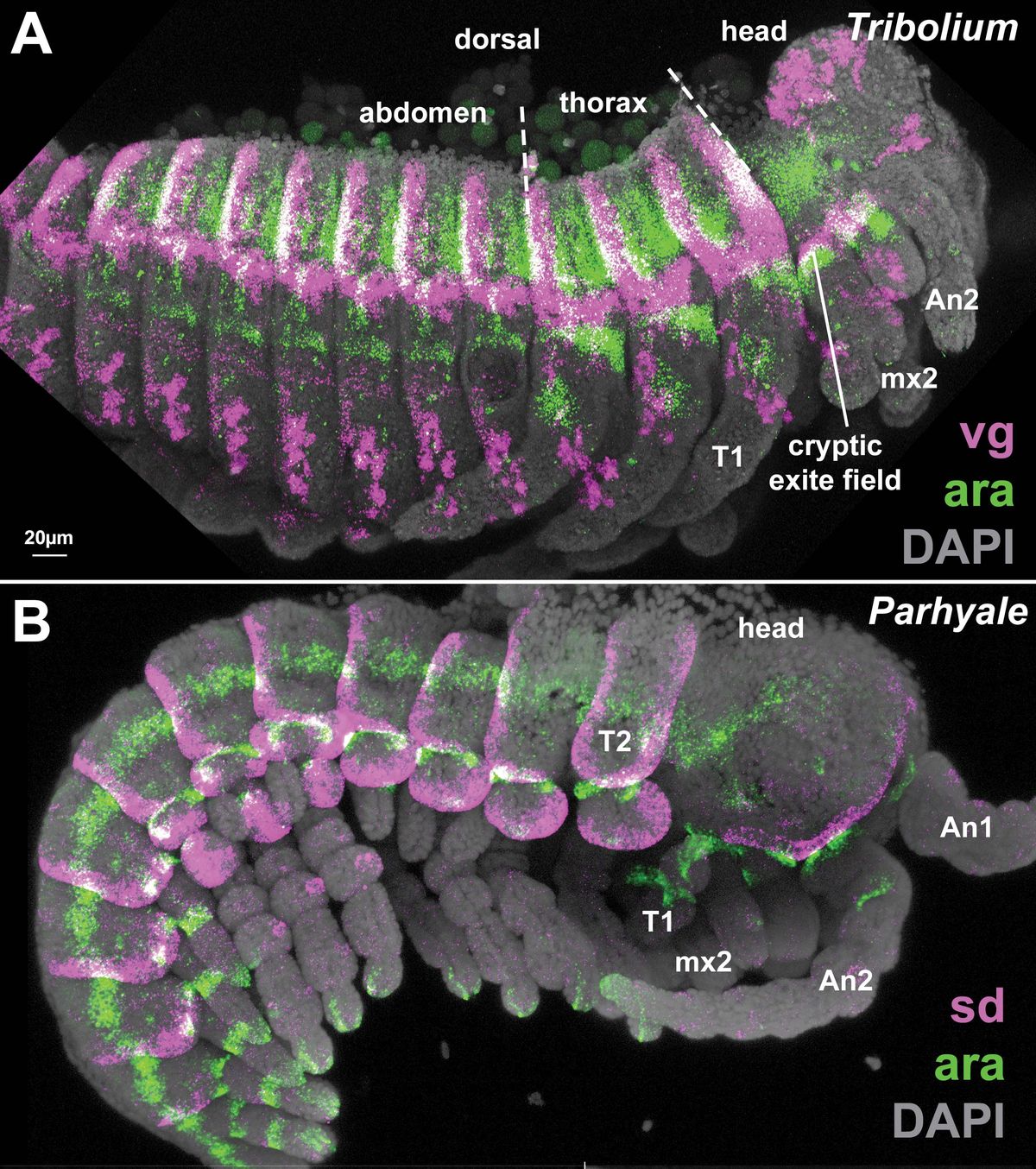 Despite these contrasting conclusions, the researchers who spoke with The Scientist agree that some sort of consensus is growing. Bruce, who wrapped up her PhD at UC Berkeley and moved with the Patel lab to Marine Biological Laboratory in Woods Hole, Massachusetts, says she still thinks that the incorporated eighth leg segment—the tergal piece—is the primary and likely the sole contributor. Tomoyasu says he agrees with the first part—that the tergum “appears to be the major source of insect wing tissue”—but maintains that “there seem to be additional contributions from other tissues.” He adds that he now suspects there may be three distinct contributors. “At this point, I think it is still elusive which of these tissues contributed to the emergence of the insect wing.”

University of Connecticut evolutionary biologist Elizabeth Jockusch, who was not involved in either study but who coauthored an accompanying perspective about the “duelling models,” agrees that both papers provide convincing evidence for the old hypothesis that “chunks of the leg have essentially become chunks of body wall.” But the fundamental question remains: Did the wings evolve from the tergal chunk or the pleural chunk, or both?

In December 2021, Jockusch and a few other colleagues published a study of milkweed bugs (Oncopeltus fasciatus) suggesting that the story could be even more complicated. Genes that researchers typically use as signposts of wing development, including vestigial, are expressed in various projections, or outgrowths, of the insect body wall—not just in the wings. “There’s these set of genes that people have thought of as wing genes and we think that those ‘wing genes’ are probably more likely to be margin outgrowth genes,” says Jockusch’s coauthor and former graduate student Cera Fisher, now a postdoc at Cornell University. The group has also found “wing genes” at play in the development of elaborate helmets in treehoppers (family Membracidae). In terms of the tergum versus pleura debate, Jockusch says her work “doesn’t favor either of those hypotheses about wings.” Rather, “what it says is we need other kinds of evidence.”

Moreover, she adds, the origin of wings is not the only facet of their evolution that’s left unsettled. Hand in hand with the inquiry into wings’ evolutionary origins is a lively discussion about their novelty—whether they should be considered a completely new structure or merely a modification of a homologous body part in an ancestral animal. “I think that’s probably a significant point of debate,” says Jockusch. Evolutionary biologists have often argued that wings are novel structures, but Bruce says she sees clear homology, and now suspects that true evolutionary novelty is even rarer than currently appreciated.

As for her introduction to these multifaceted debates about insect appendages as the result of a last-minute change in her thesis project, Bruce chuckles. “Luckily, it actually was interesting.”